Plant of the Month - California Laurel 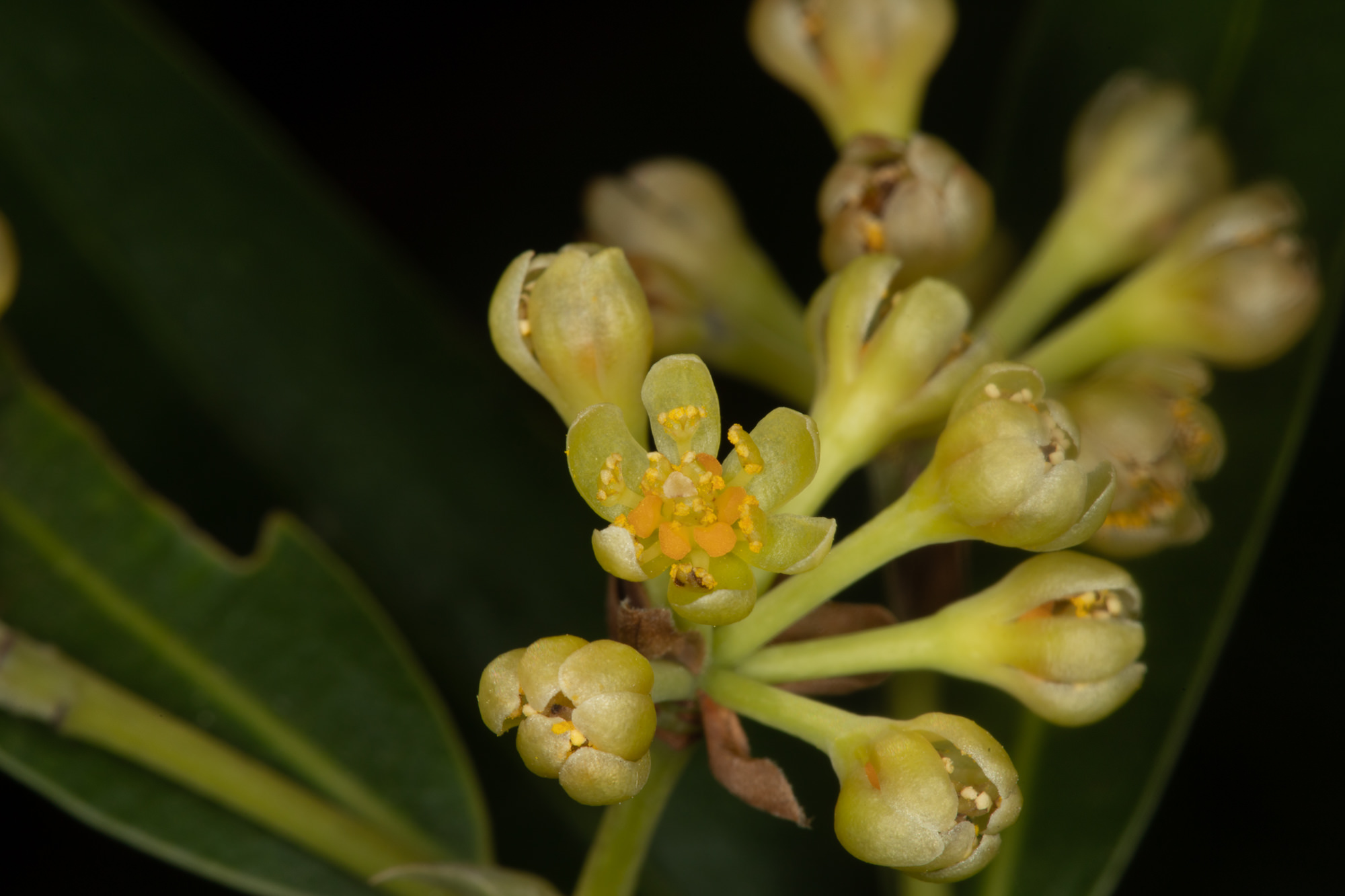 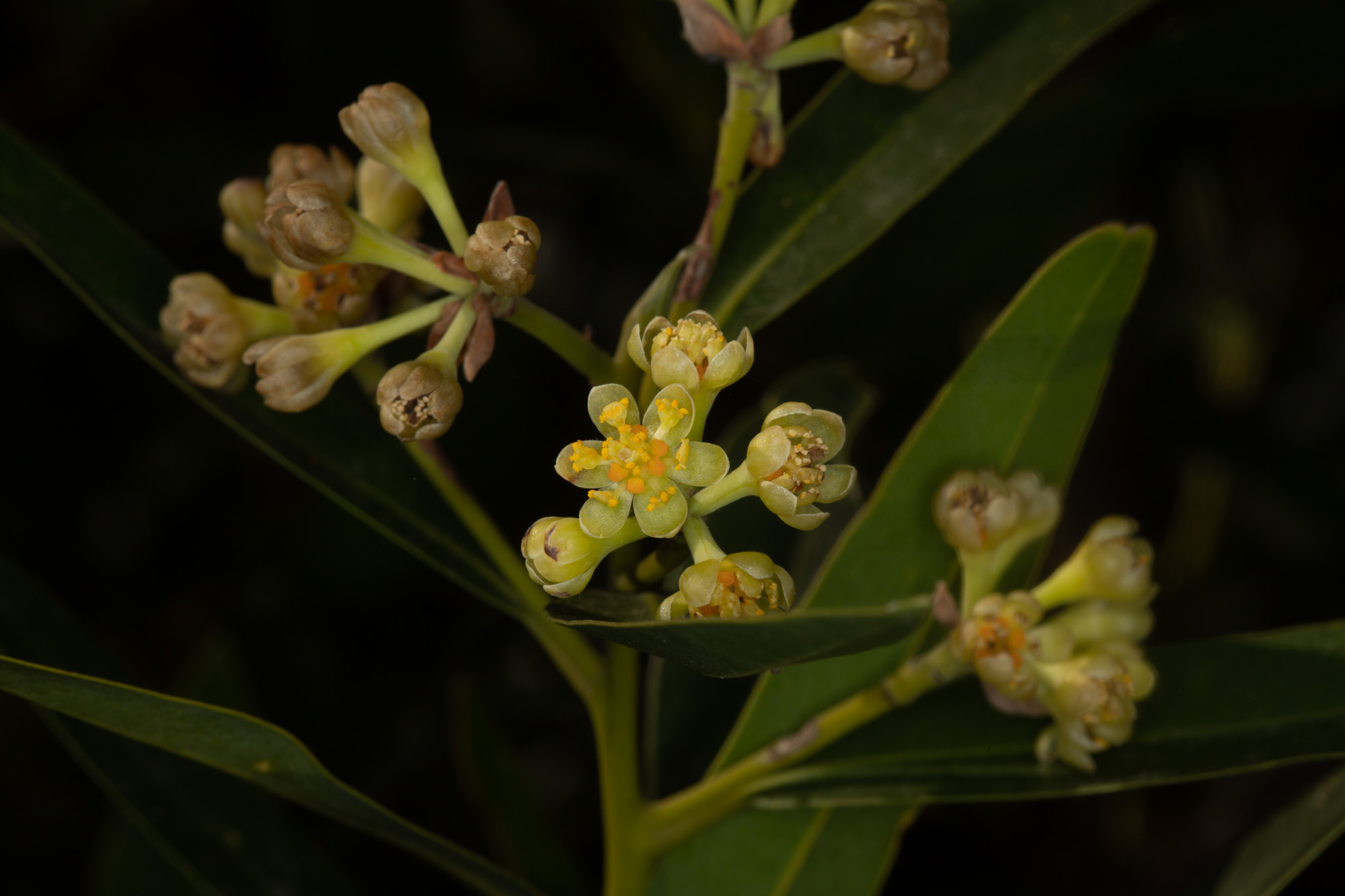 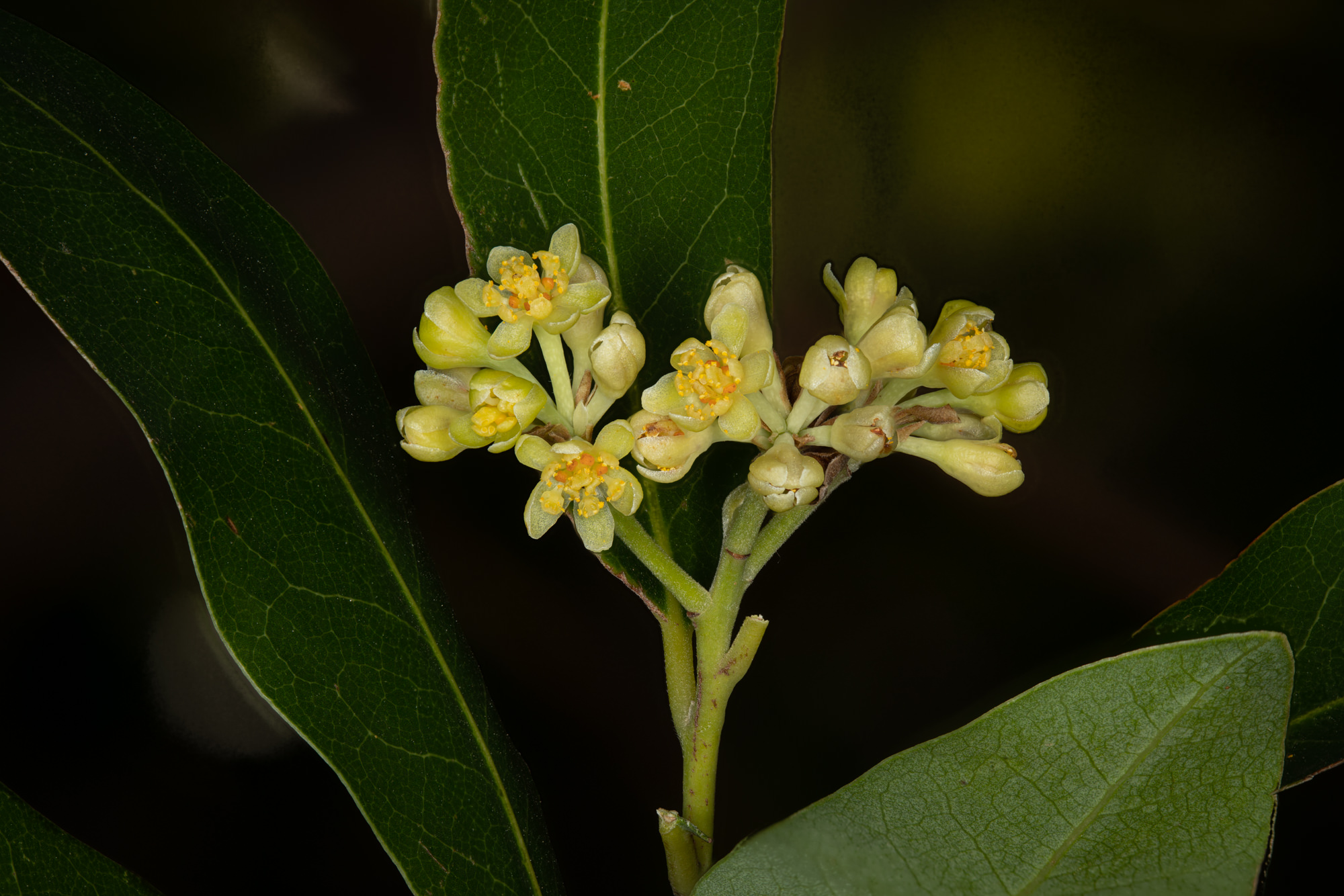 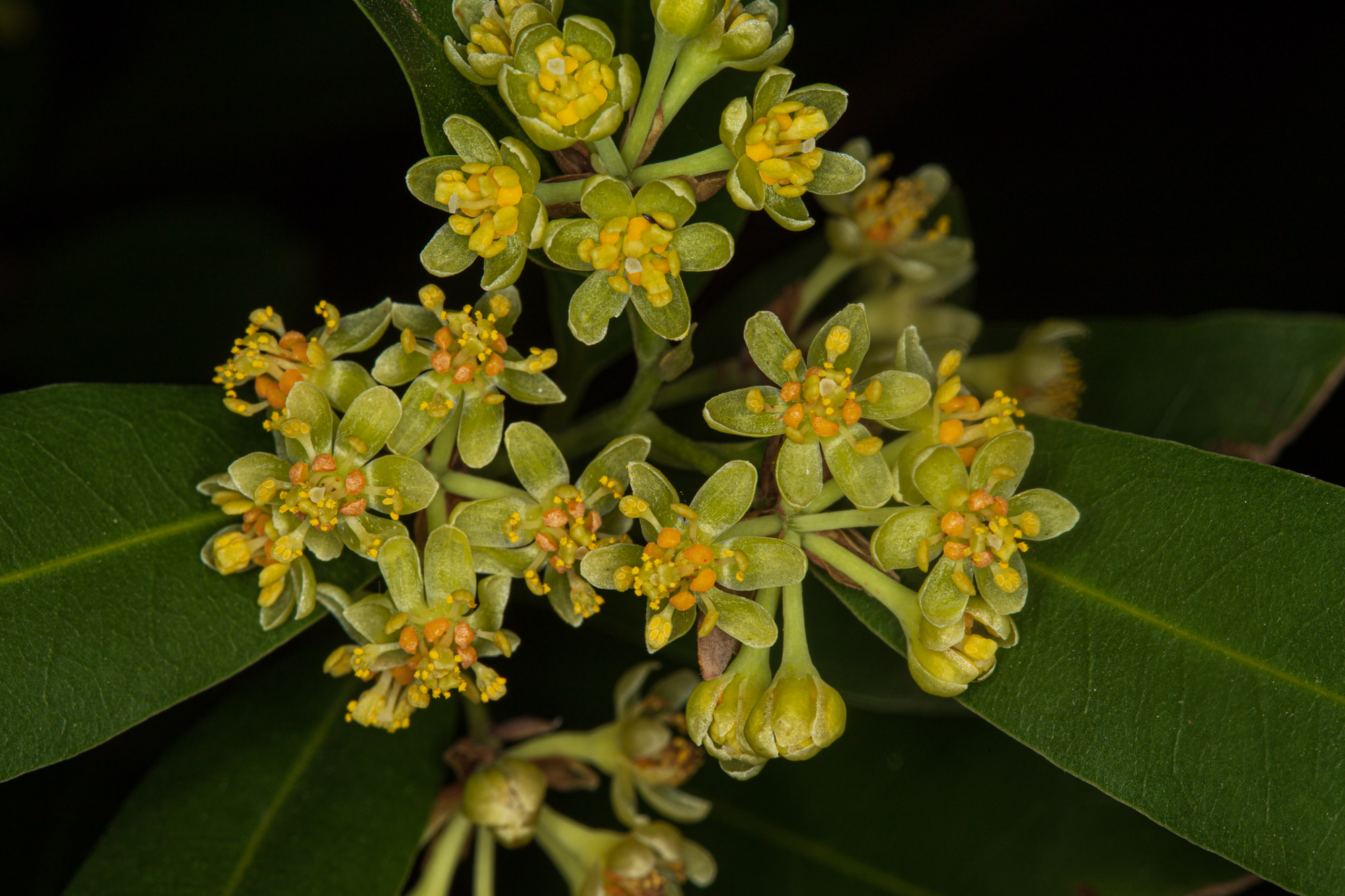 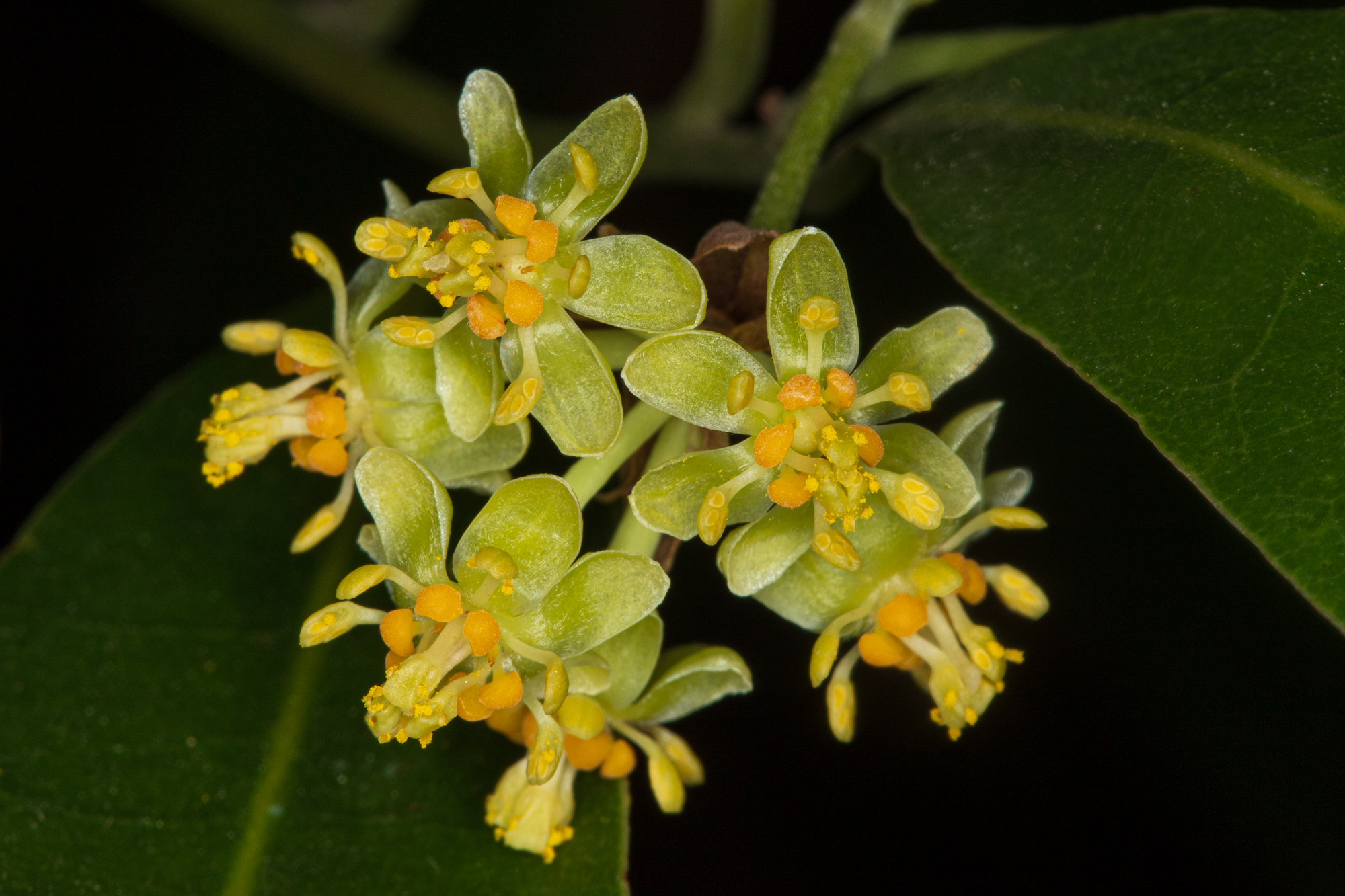 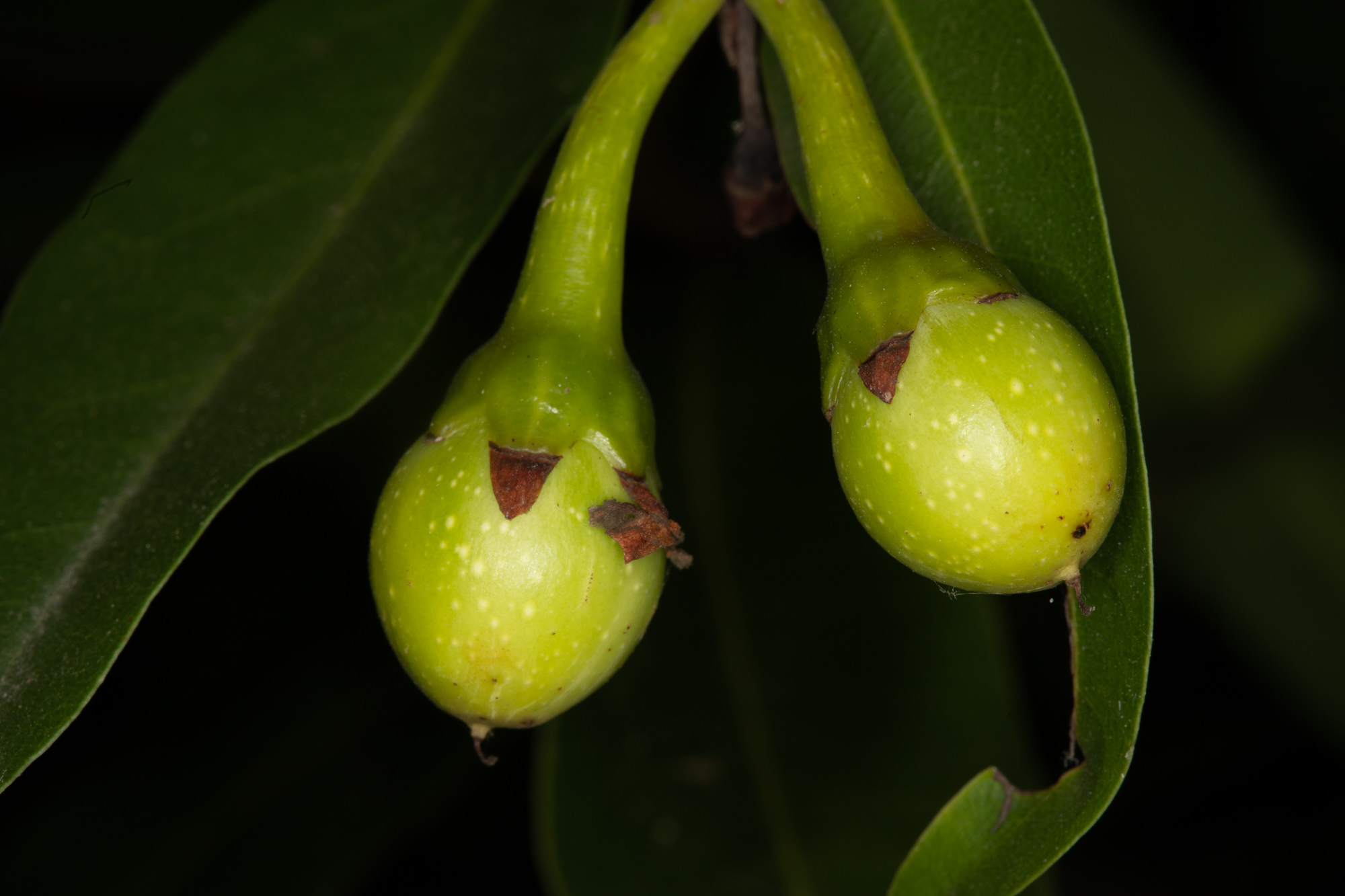 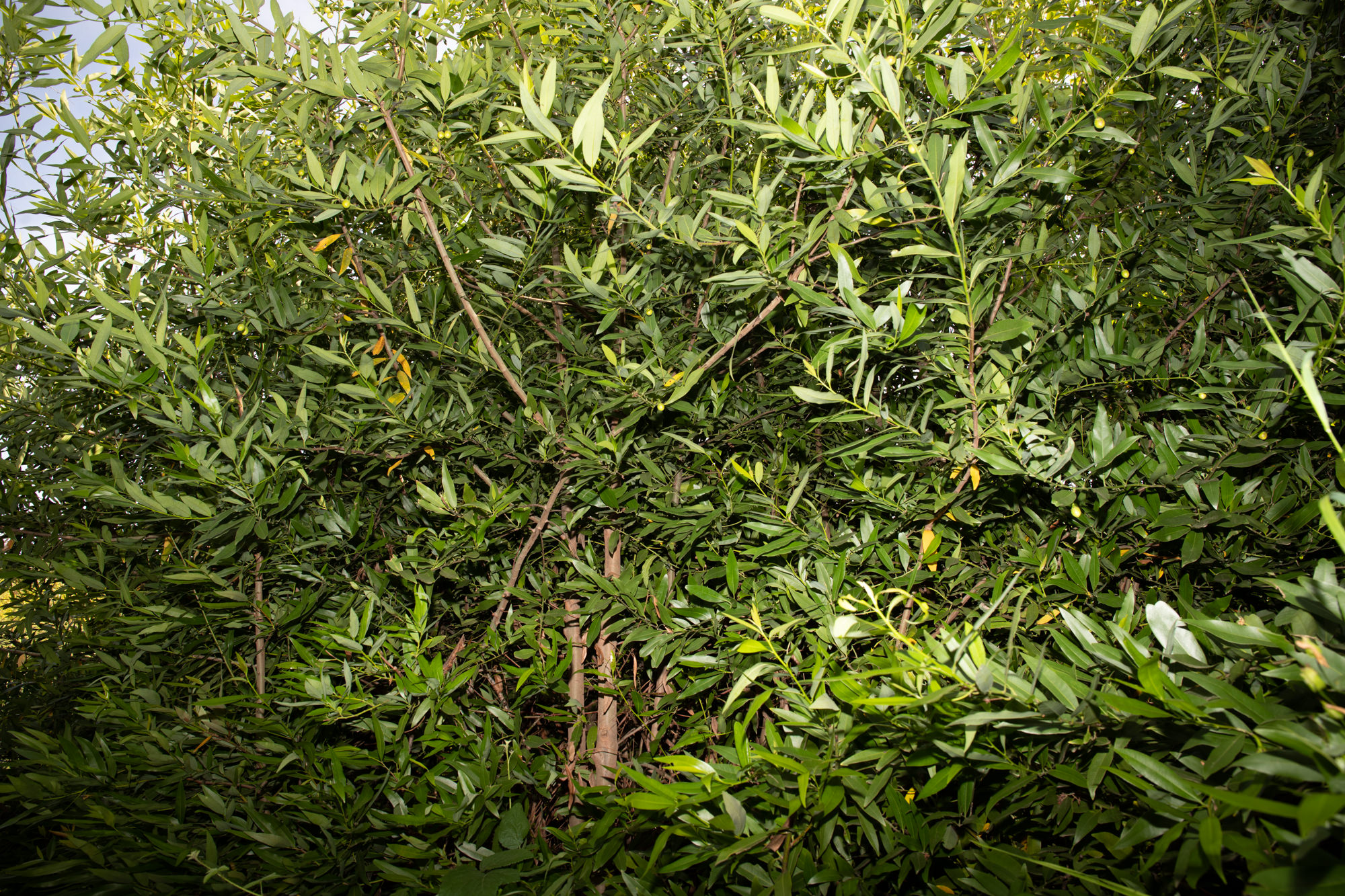 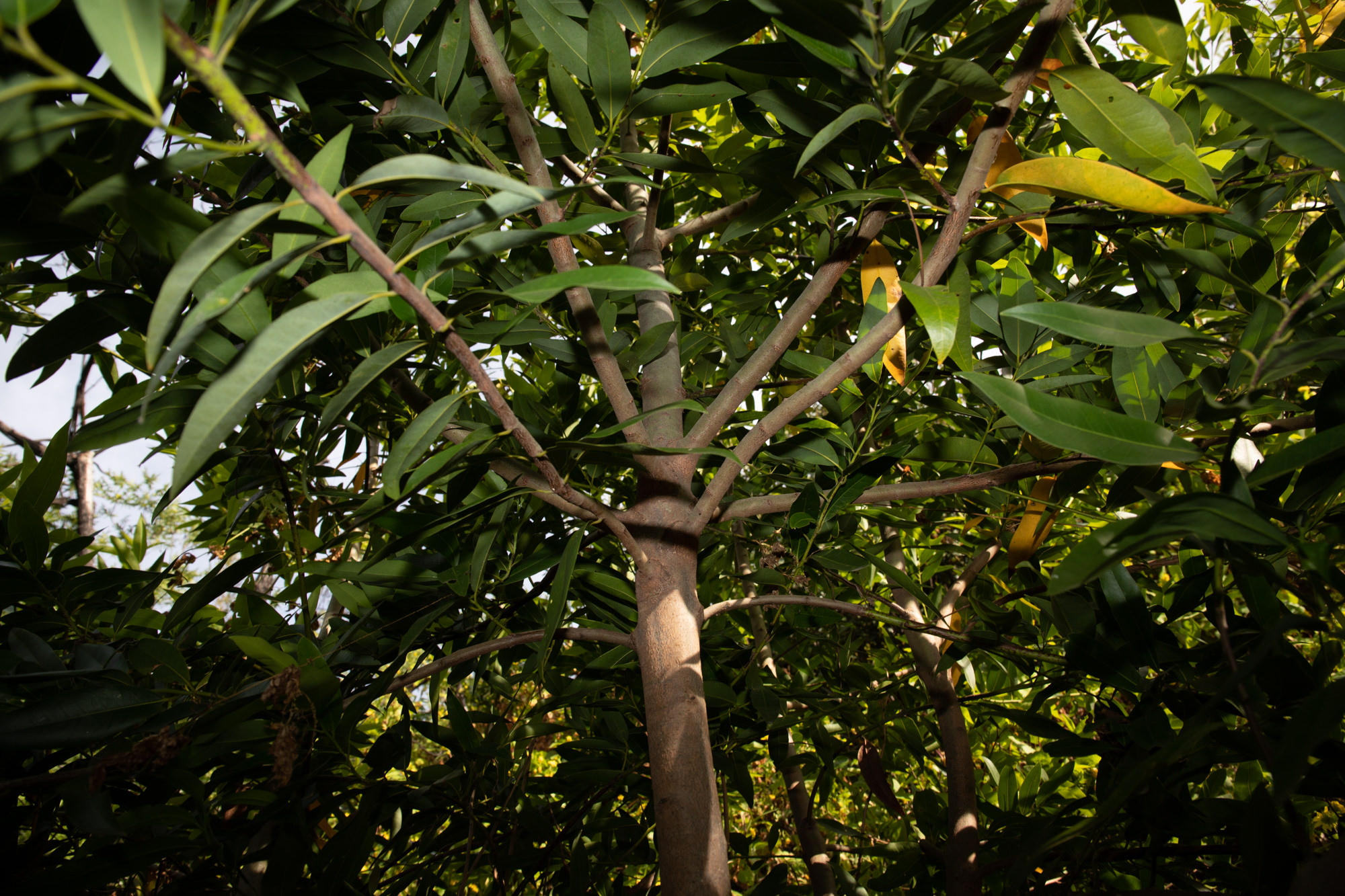 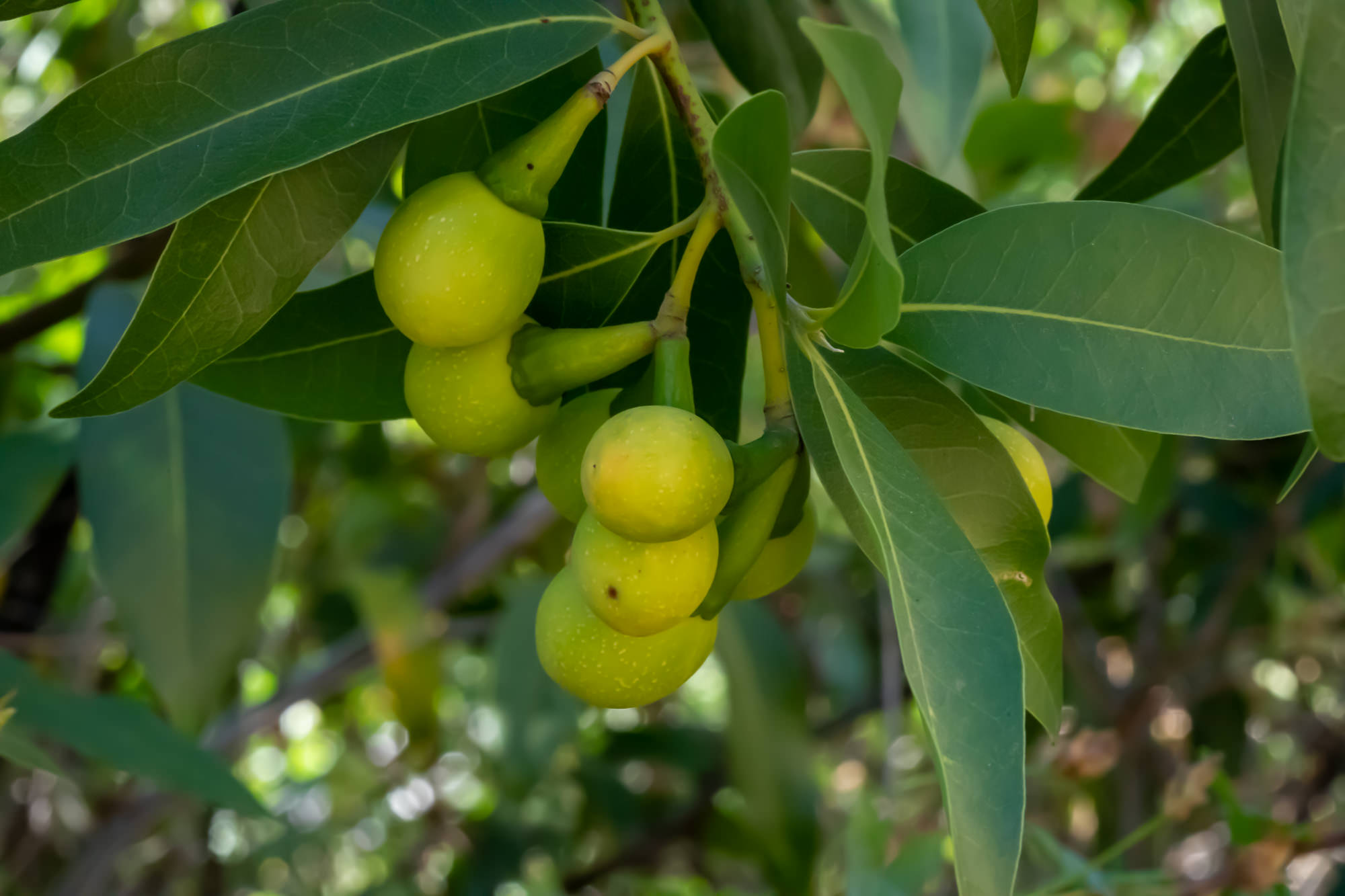 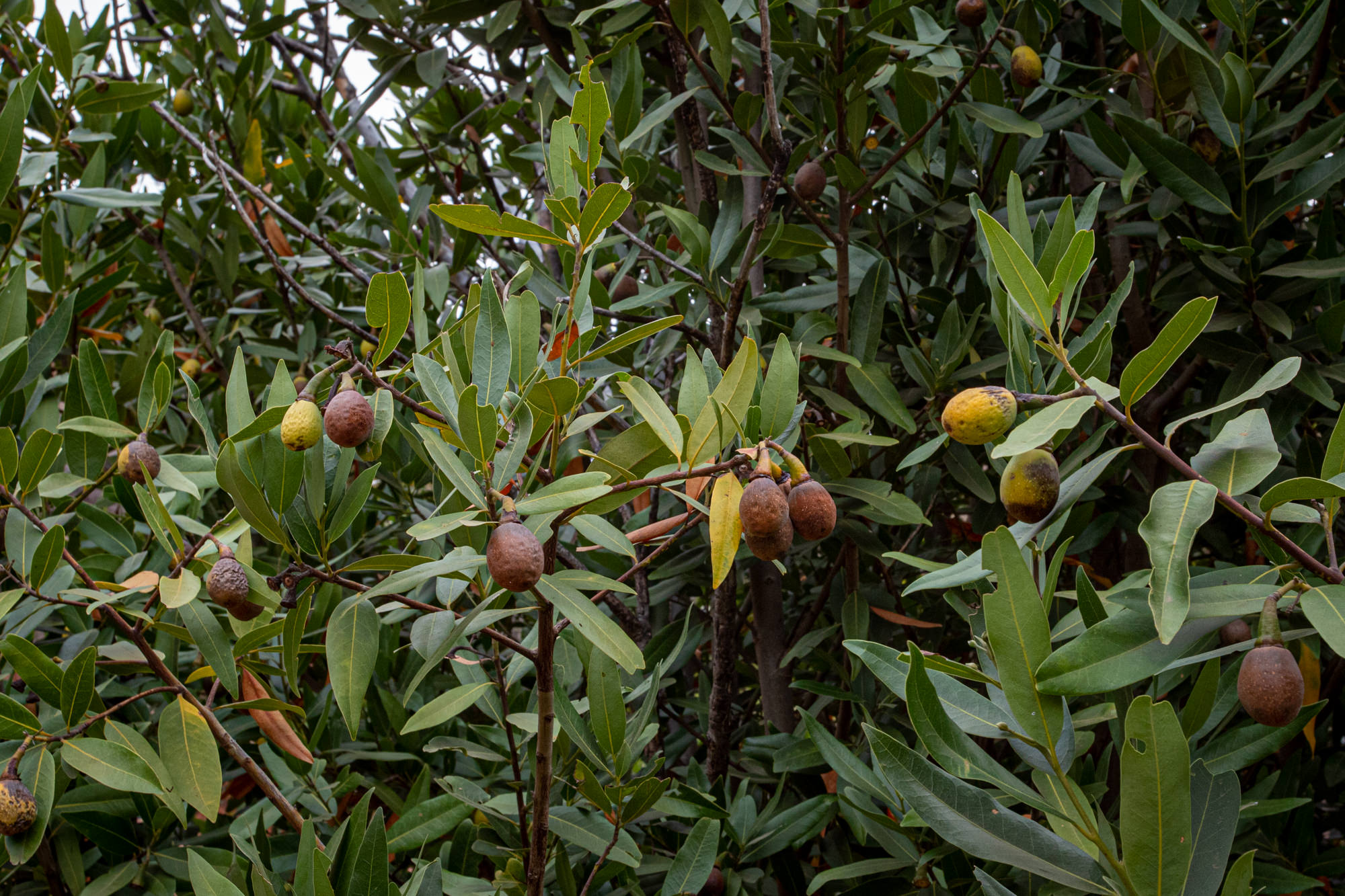 Bay Laurel - Umbellularia californica is an evergreen tree in the Lauraceae family. This family also contains Cinnamon, Avocado and Sassafras among many other species. Native to coastal forests of California at elevations up to 5000 feet. It is found throughout state. Variable in size, from a 6 ft. shrub to more than a 100 feet in height, most often ranging from 20 feet to 45 feet. Size and growth rates depend (like everything else) on local conditions. Color of the bark does range from maple blonde to walnut brown. Leaves are oblong, smooth-edged and have a peppery aroma when crushed thereby making them a useful as a cooking spice. Flowers are small, white, yellow or yellowish green, and open in late winter and early spring. The fruit is a round green berry lightly spotted with yellow and purple - it resembles an avocado - no surprise there? Bay Laurel can tolerate serpentine or clay soils. Bay Laurels are often found in clonal clusters.

Flower buds grow on the shoots from the previous season. This allows the flowers to bloom earlier than other plants. Flowers are produced in late fall at the beginning of the rainy season, Cold winters may delay flowering until mid-January. The timing of the rains is the best guide to when to find this tree with flowers. If you know the location of one of these trees, walk by it during the year to see the changes. If you want to see the flowers, observe it in January, the fruits are set by May and dropped during the Summer. California laurel begins reproducing by seed at 30 to 40 years of age and live more than 200 years. The flowers are small, yellow or yellowish-green, produced in small umbels (hence the scientific name Umbellularia, "little umbel"). Bay Laurel has perfect flowers (male and female parts in the same flower). The flowers have a lot going on. My macro lens is useful in getting a look at these relatively small but complex flowers. The flowers do not have petals but they do have six oblong sepals - a leaf type structure. Stamens are found in two rows - the outer row has six and the inner row three. For the inner row, there are two yellow glands associated with each stamen. The outer row of stamens have four anther sacs - they give the stamen a paw like appearance. The ovary is superior and includes a stigma that is mostly white.

Native Americans made tea from the root bark of California laurel and used the leaves for control of biting insects. The leaves were also used medicinally by Native Americans and pioneers for treatment of headache and rheumatism.

Fire response:
California laurel sprouts from the root crown, bole, or stump. Bole sprouts are more common on plants growing on south-facing slopes, while root collar sprouts usually appear on plants on north-facing slopes. In a somewhat anti-competitive move Bay Laurel releases terpenes that kill off competing plants to limit other plants ability to germinate under its canopy - including its own seeds.

umbella'ta/umbella'tum: refers to the arrangement of the flowers which arise in a head from a central point, i.e. bearing an umbel.