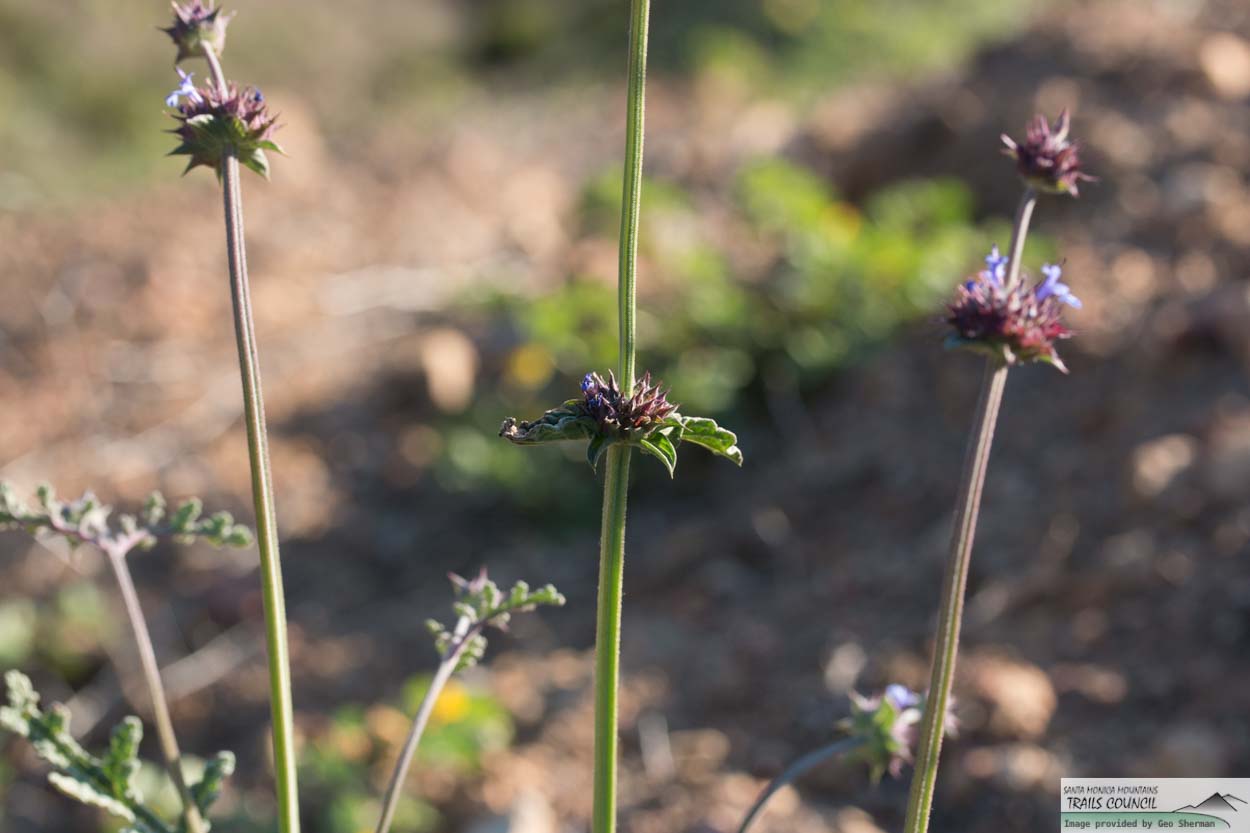 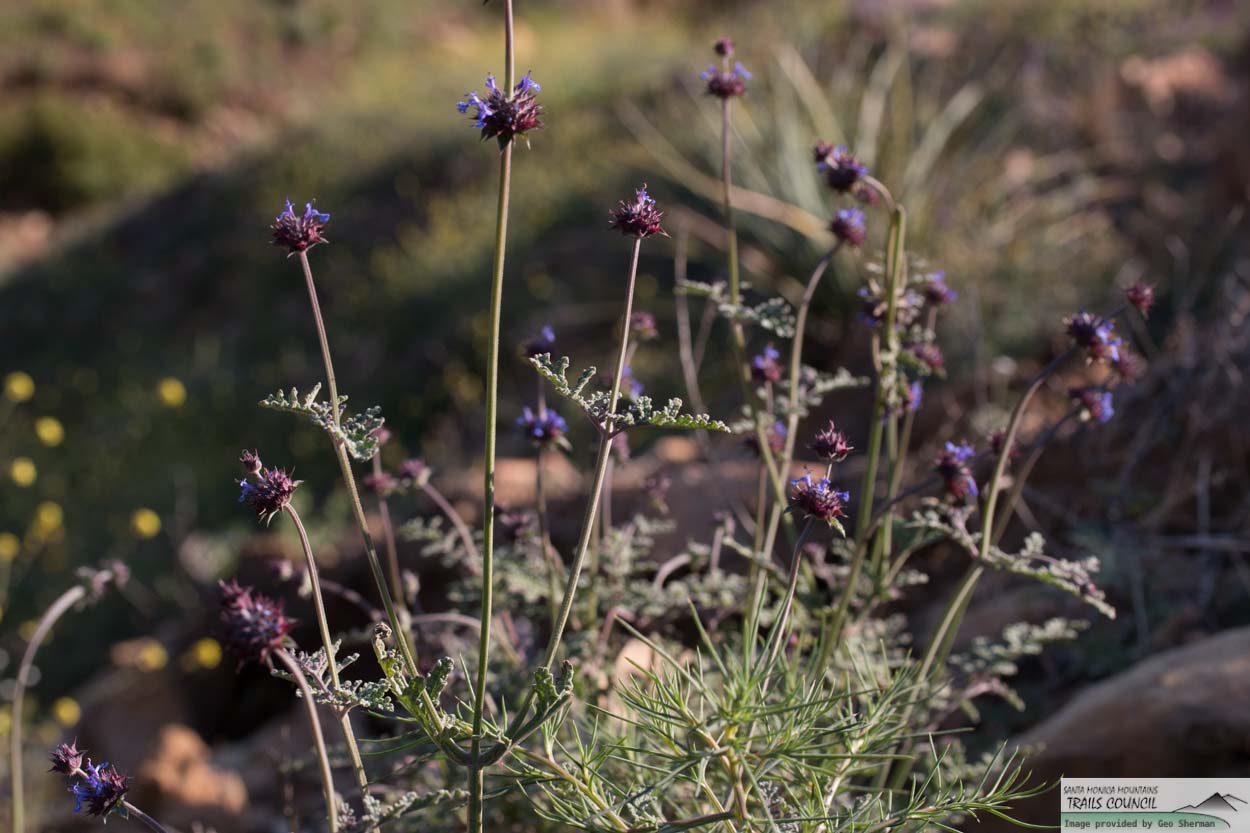 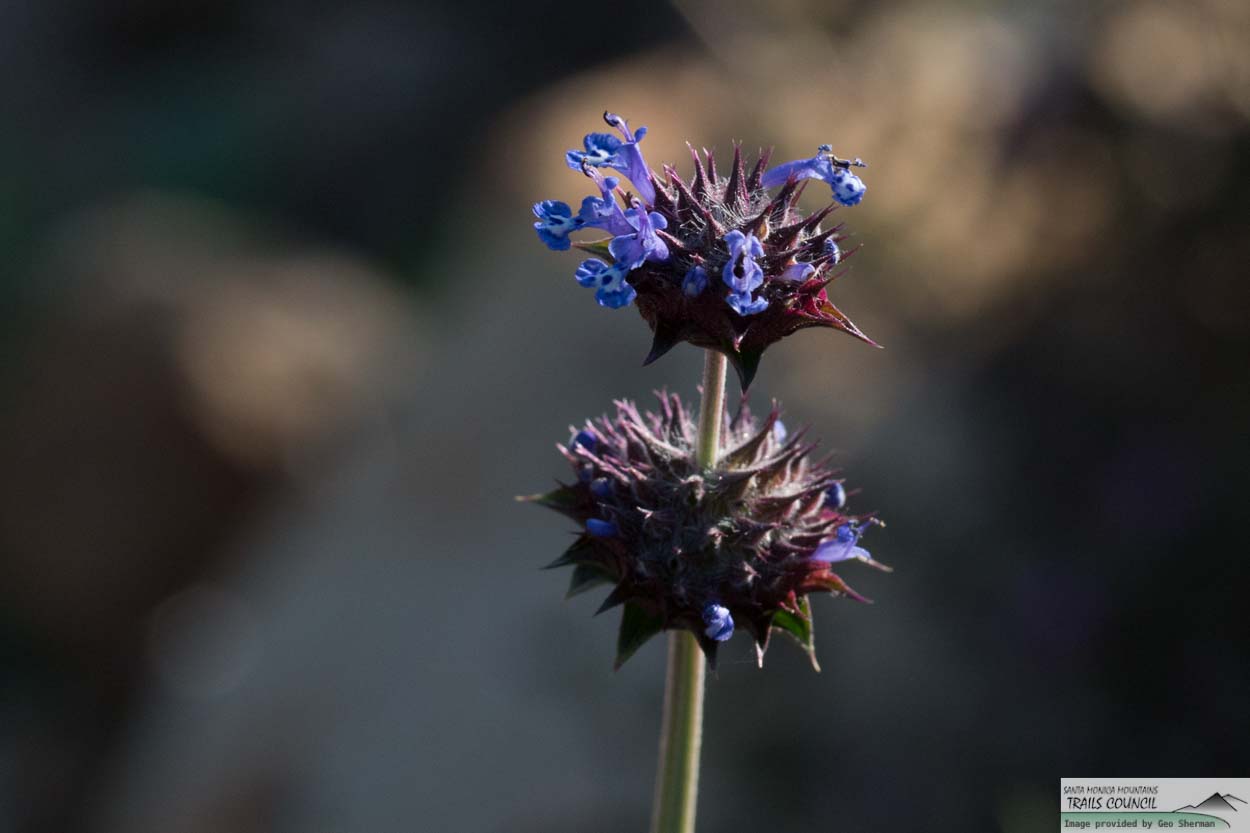 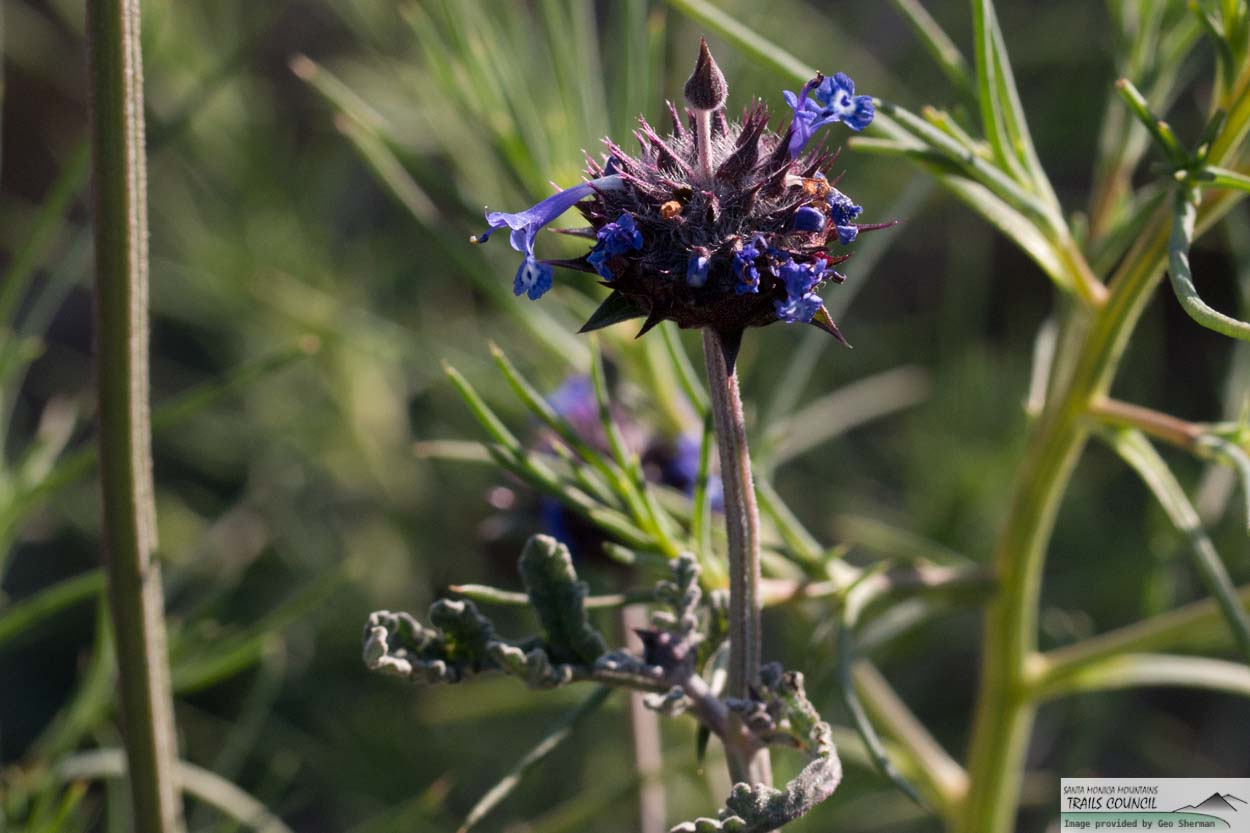 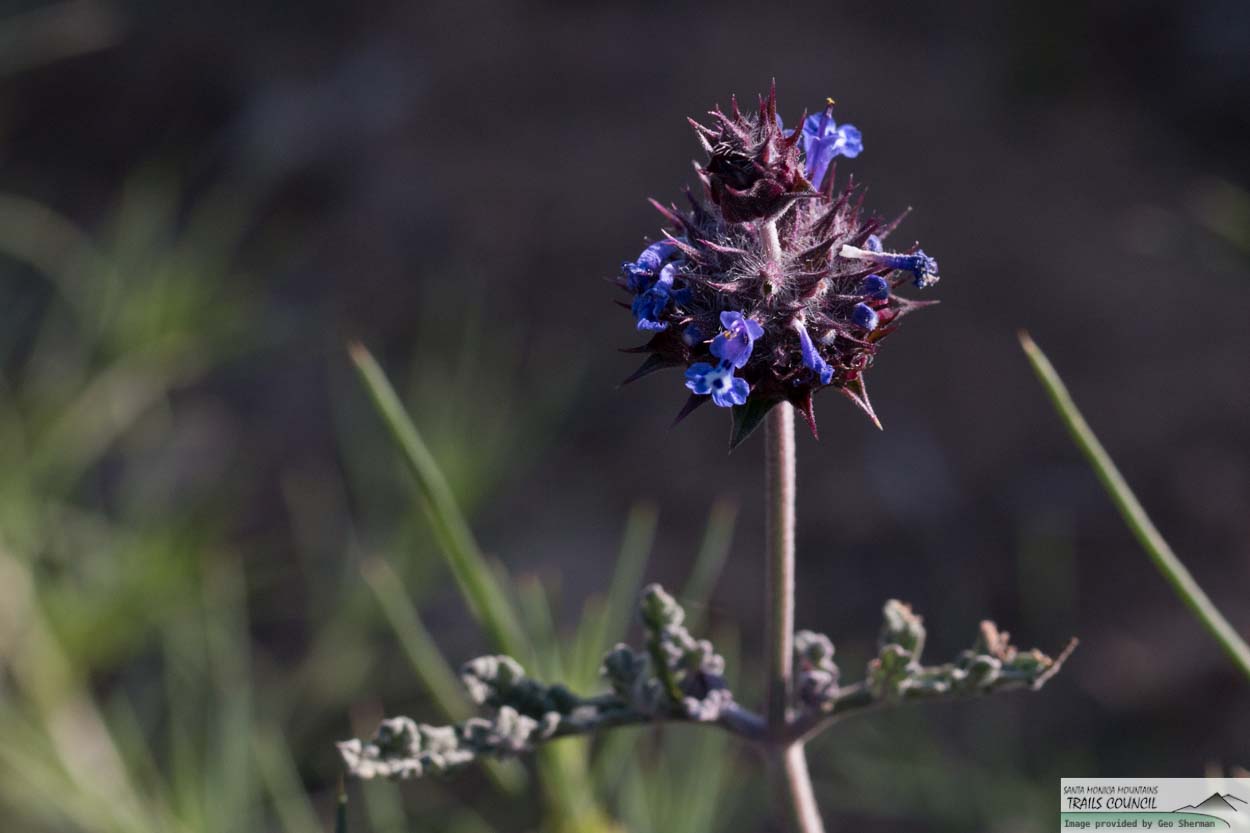 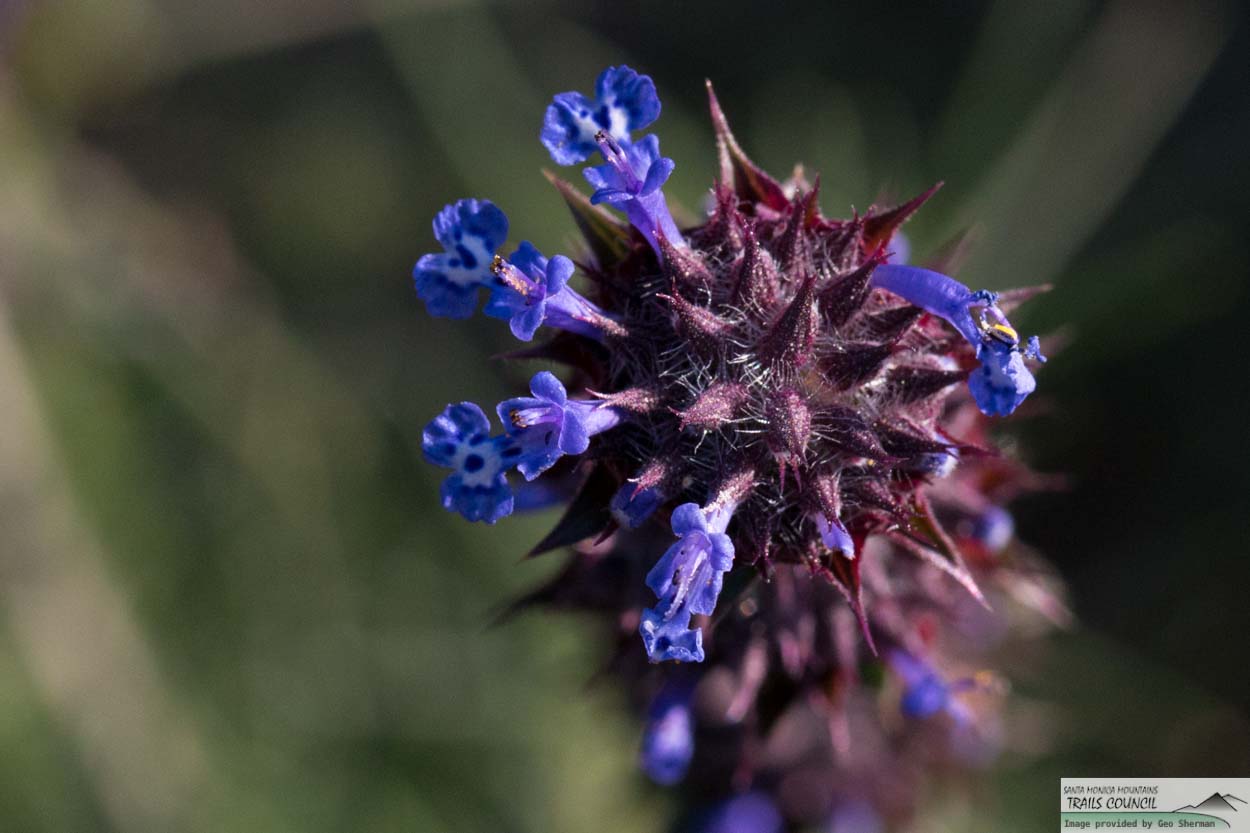 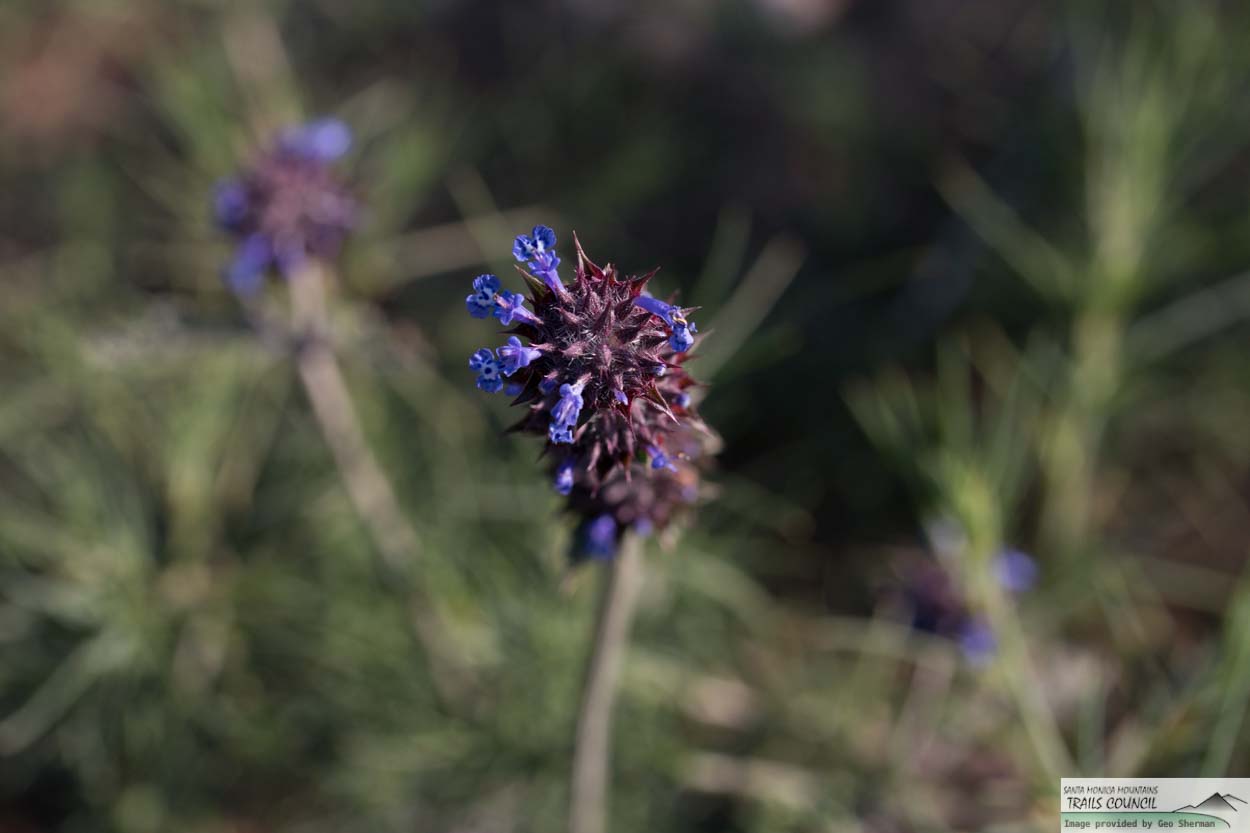 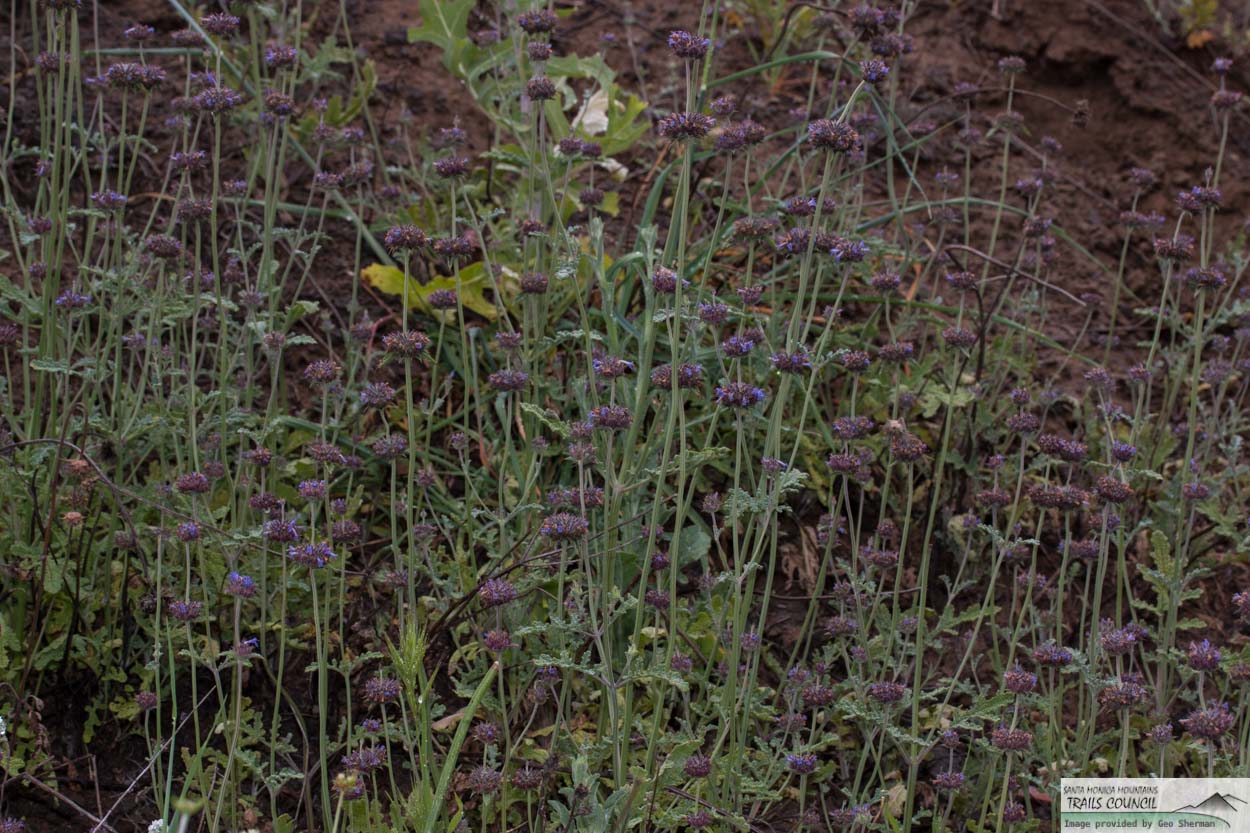 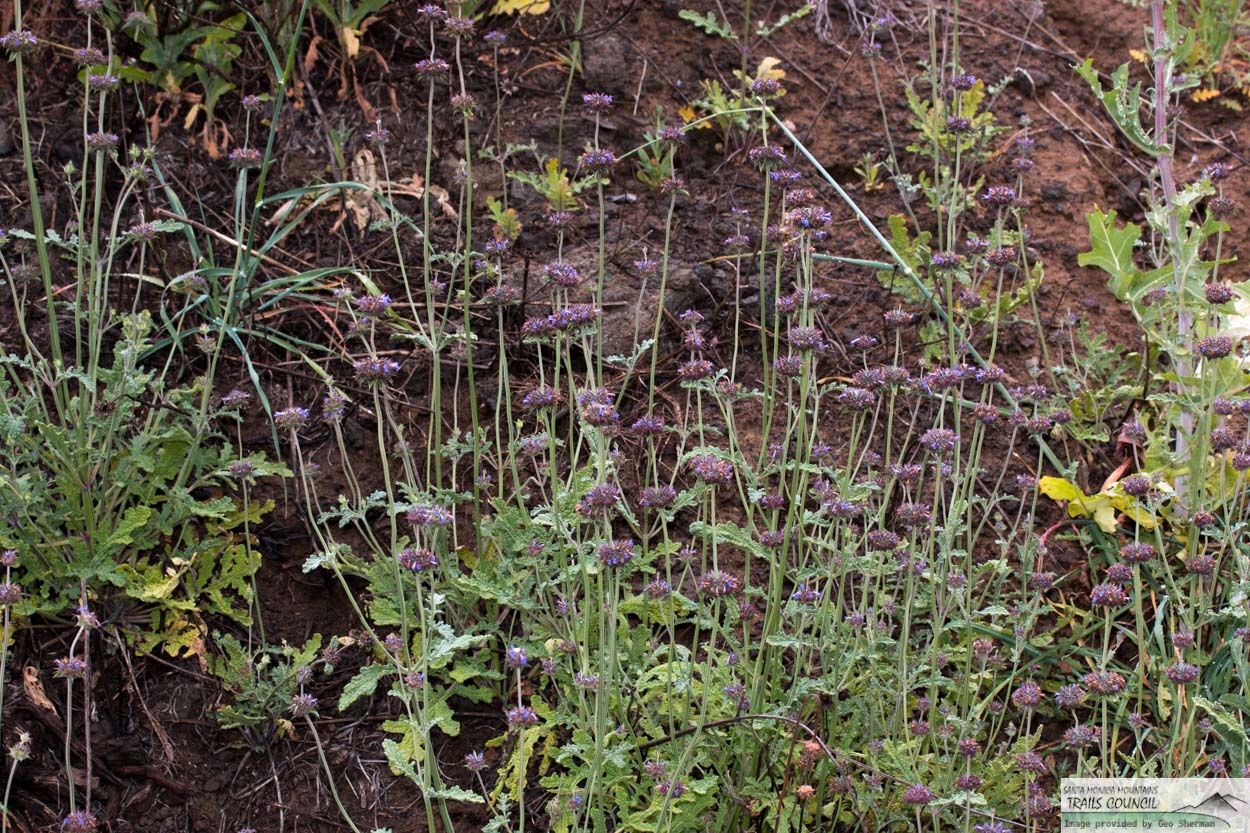 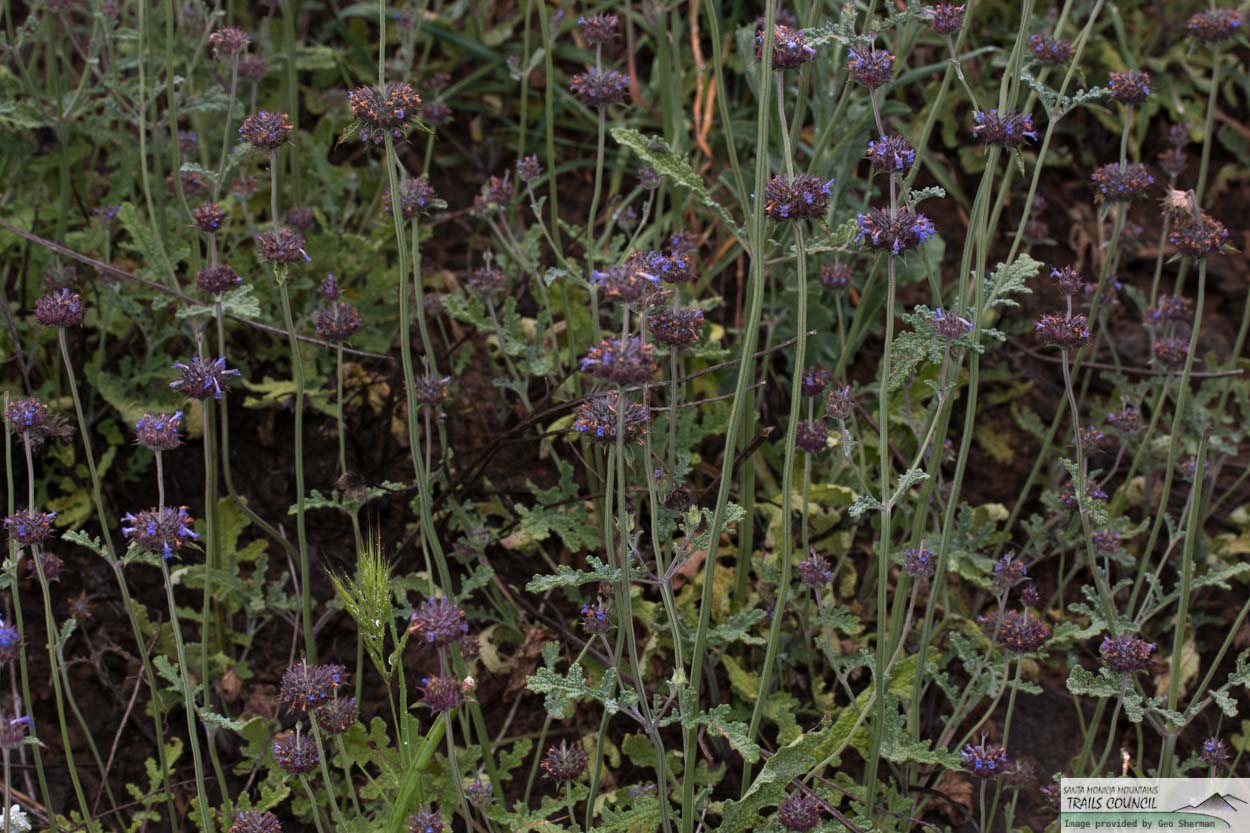 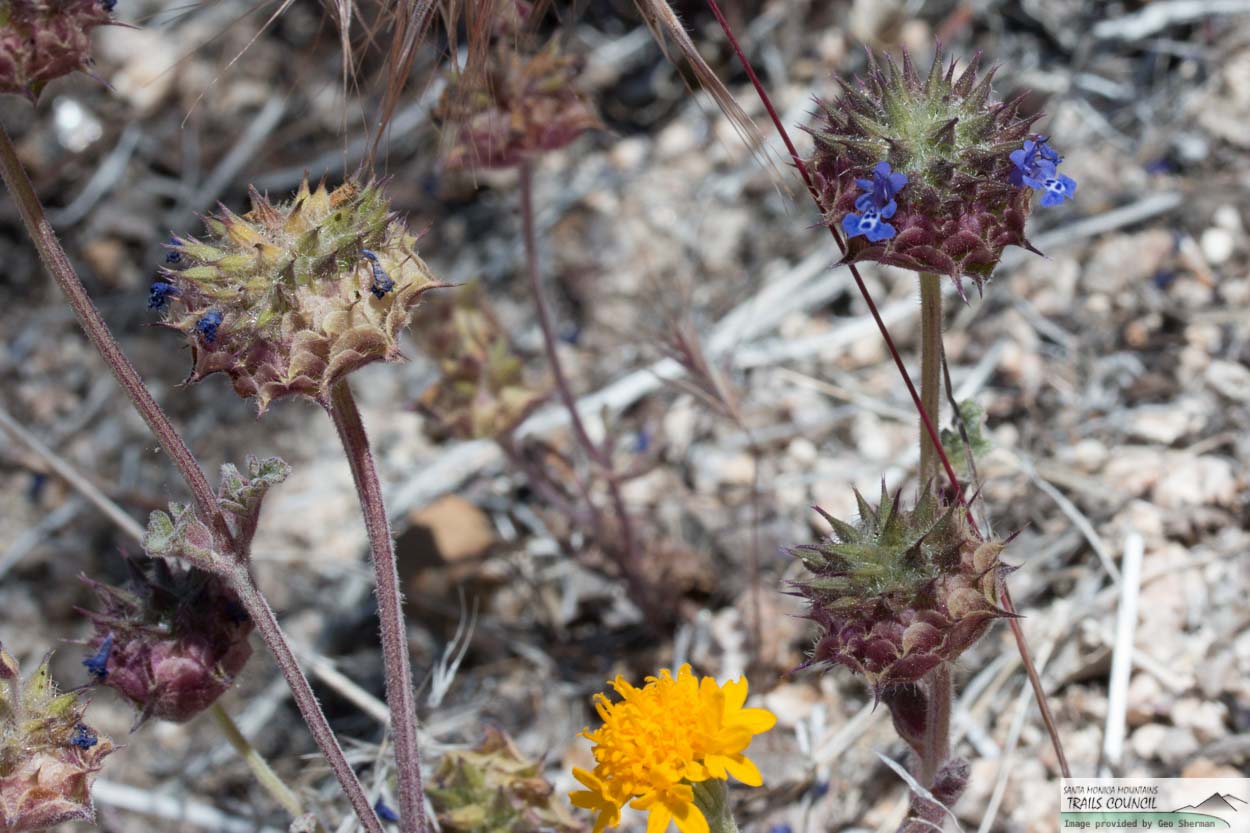 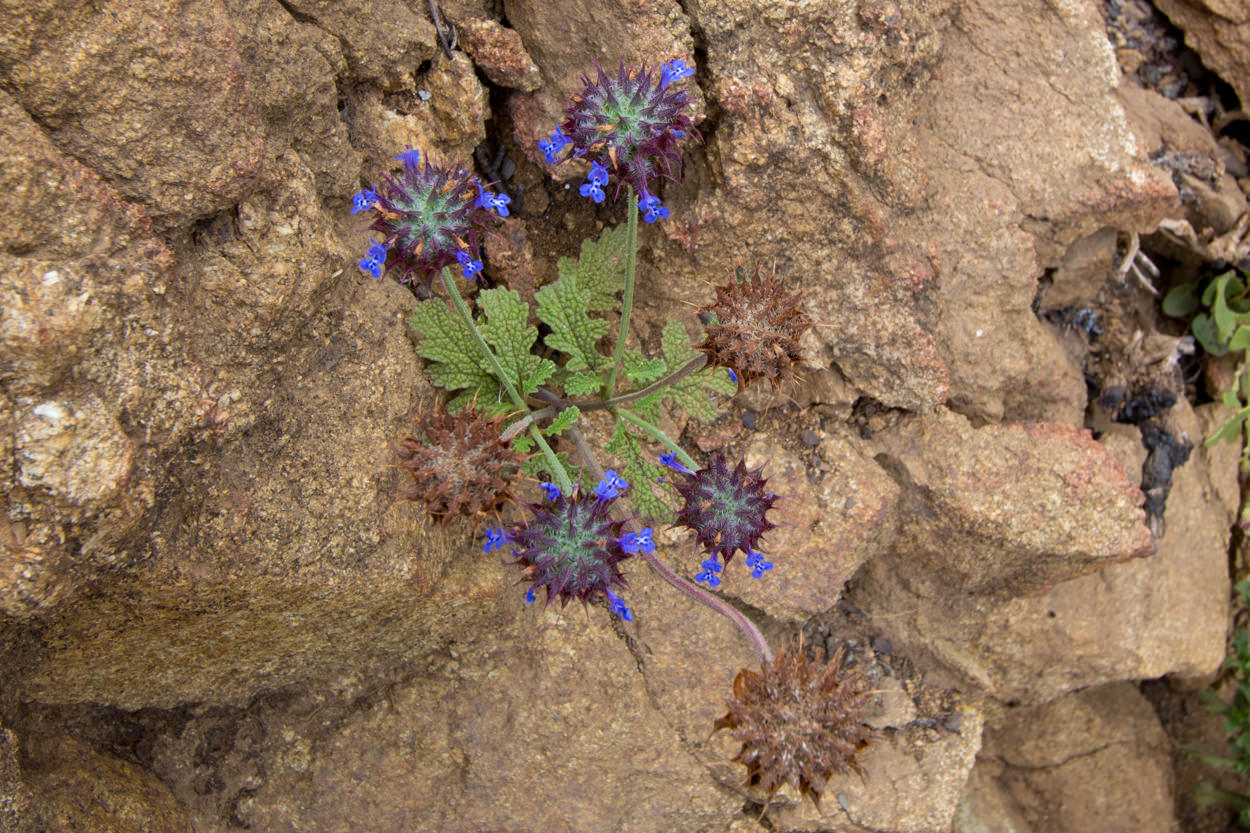 We are fortunate to have several species of Sage in our local mountains: White Sage, Purple Sage, Black Sage, Chia and Hummingbird Sage. These plants belong to the Mint family and had many uses for the native peoples of California.

A common trait of most Salvias is that they have opposite leaves with square stems and the flower is a colorful corolla having two lips of unequal length. The Chia has blue to purple flowers. A common misconception is that Sagebrush and Chia Sage are related. The more well-known Sagebrush (Artemisia californica) is not related to this group of plants and is instead a member of the Aster family. What Sagebrush and the Sages have in common is pleasant fragrance produced by the plants - so of course there are exceptions - Chia lacks the pleasing scent of other Sages. On occasion many of these plants can be found next to each other although the plants tend to self-segregate by amount of annual precipitation and/or a preference for northern or southern exposure. Chia grows in California, Nevada, Arizona, New Mexico, Sonora, and Baja California. For Chia that grows in California it is found in the Coast Ranges and southern Sierras but is most most common in the southern part of the state from the coast into the desert. The stem hairs are generally short and not dense. It has oblong-ovate basal leaves vary in length from 2 to 10 centimeters at the ground level - hence the term basal. Chia Leaves are pinnately dissected with irregularly rounded lobes . The flower stalk arises from the basal leaves, growing 10 to 50 centimeters high (depending on the conditions - hot, dry,wet). There are usually 1-2 clusters of flowers within the flower cluster. The calyx is 8 to 10 millimeter long and the upper lip is unlobed with 2 or 3) awns. The lower lip is about twice the size of the upper. The flower color can be pale blue to blue and purple tipped. Several stems emerge from the base of the plant, each bearing from one to four (2 to 3 cm apart) button-like whorls of tiny, tubular flowers (6-16mm). The pale blue to deep blue flowers have two lips; the white-tipped lower lip is cleft into three lobes, with the central lobe slightly larger in size. Several contrasting leafy, burgundy-colored bracts subtend the flower heads. A pointed tip protrudes from a central notch in each bract. Each flower results in up to 13 tiny, gray to light brown, flat seeds 1.5-2mm in length. The fruit is a nutlet that is tan to grey in color and 1.5 to 2 millimeter in length. Thick wrinkled leaves (10 to 15 cm long) are dark green and deeply lobed with a thin covering of fine, soft, grayish hairs on the upper surface. Leaves grow predominantly from the basal area of the plant and as is typical of most plants become smaller as they move up the stem. Chia was an important food for Native Americans. The seeds have amazing properties - soak a few seeds in water and the resulting solution can power you thru an all day walk - your mileage may vary. Urbanization has its costs and Chia was once more common, its populations have declined due to overgrazing, urban development, and fire suppression (Timbrook et al. 1982). This plant is a known fire follower and the Native Americans would burn their fields from time to time to increase their harvest. Flowers bloom in late spring or early summer, from March through June in California -depending on the rain. After the flowers bloom, the blossoms dry and turn from clear blue to golden, and remain dry upon their stems. The tiny seeds disperse by being shaken out of the dry blossoms.

Name Origin: Sal'via: from the Latin salveo, "I am well," columbar'iae: one reference states that this plant reminded its namer, George Bentham, of Scabiosa columbaria, and possibly derives from Latin columbarius meaning "of or pertaining to doves or appearing dove-like." http://www.calflora.net/botanicalnames/pageCI-CY.html