Plant of the Month - Golden Star 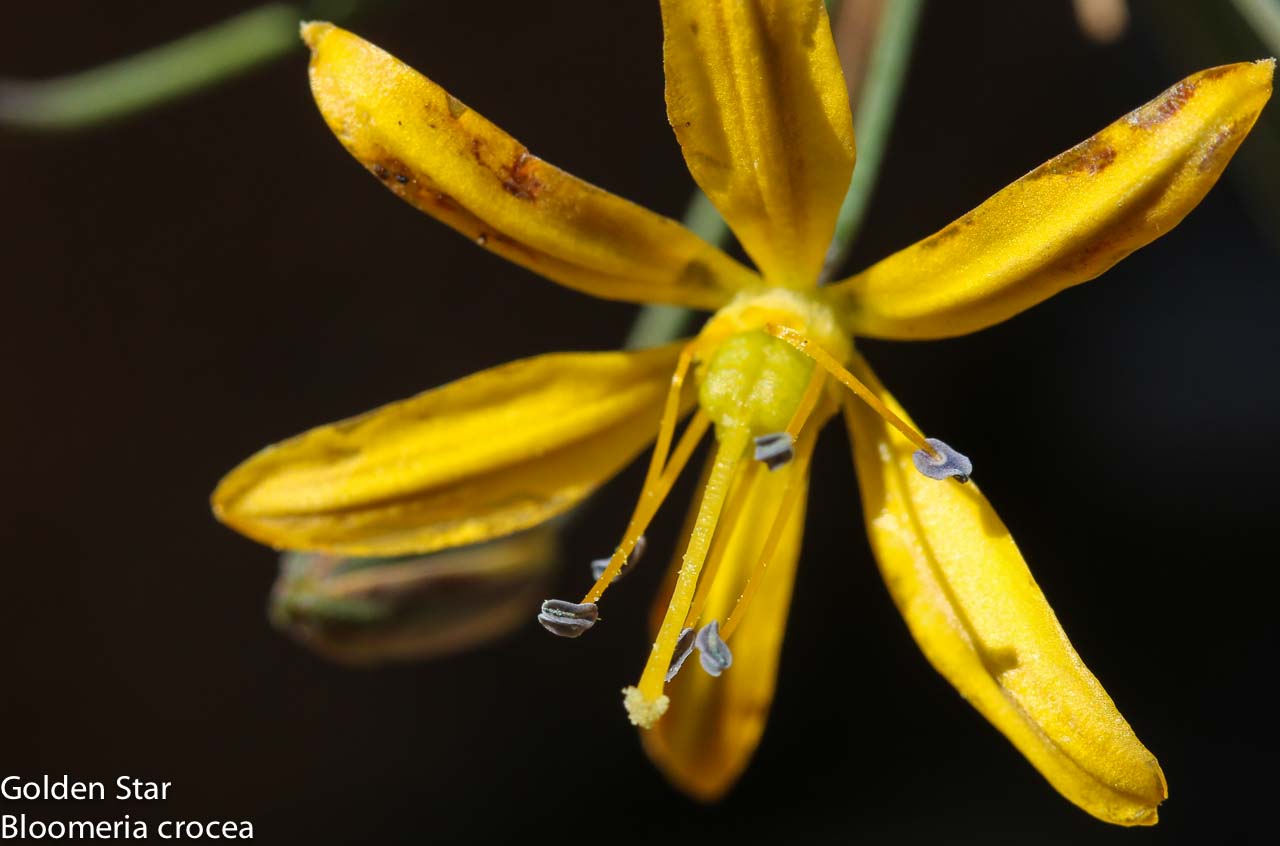 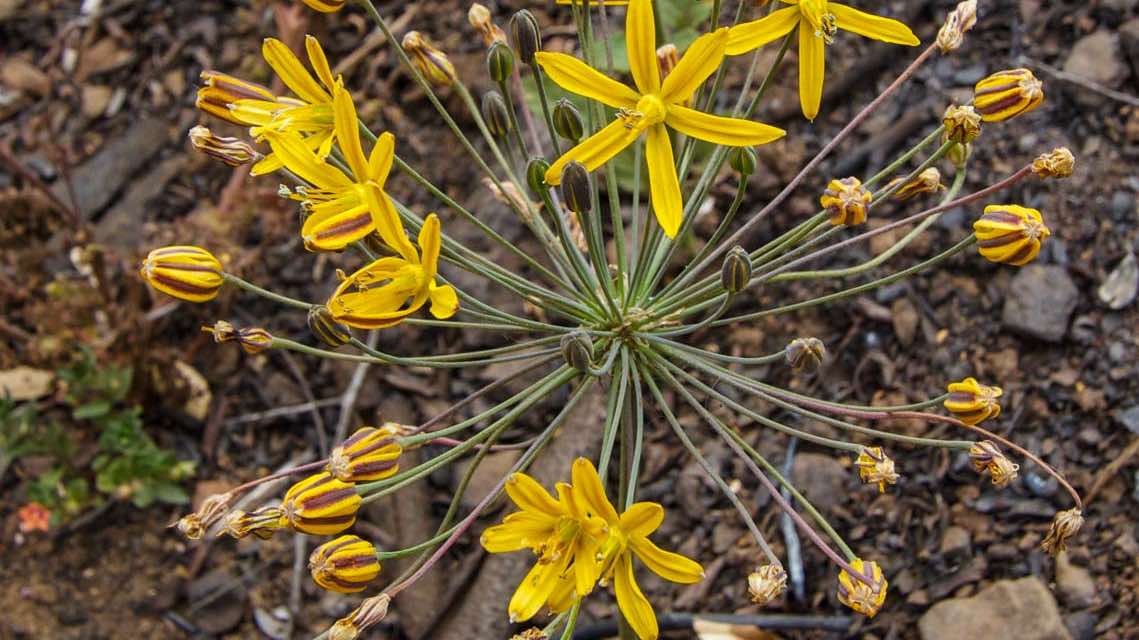 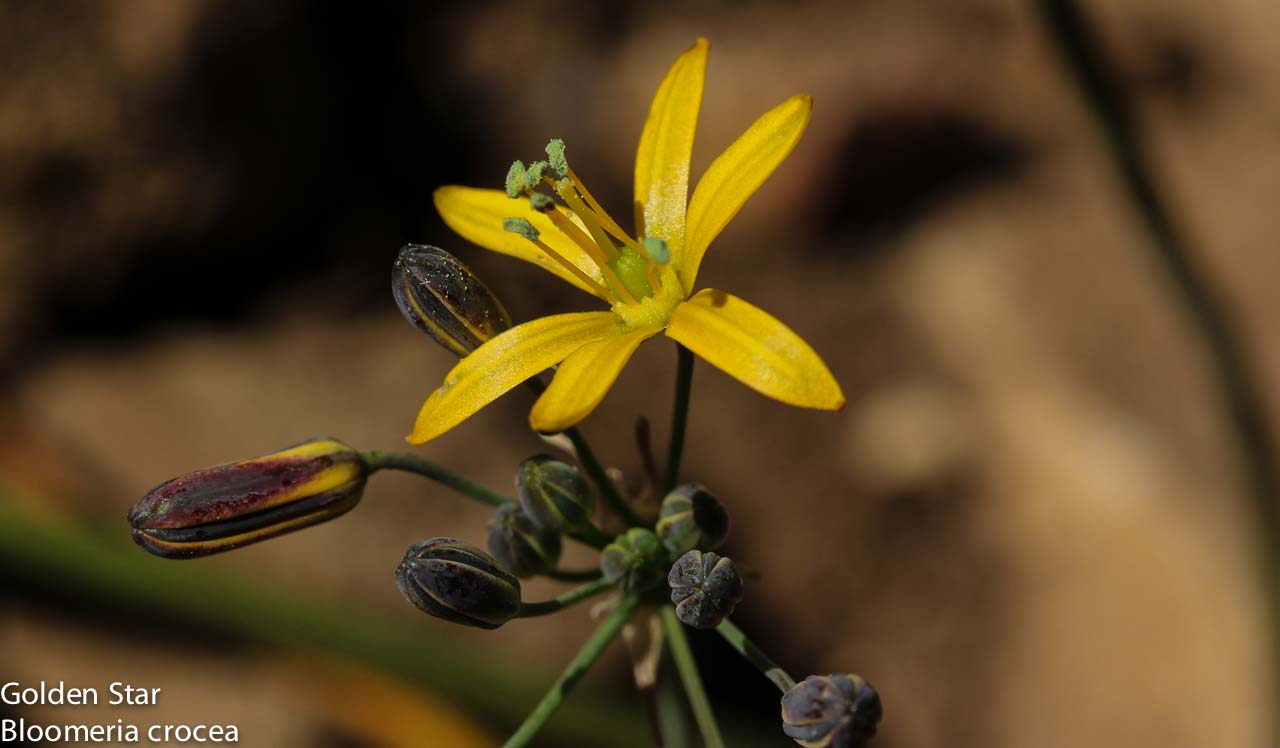 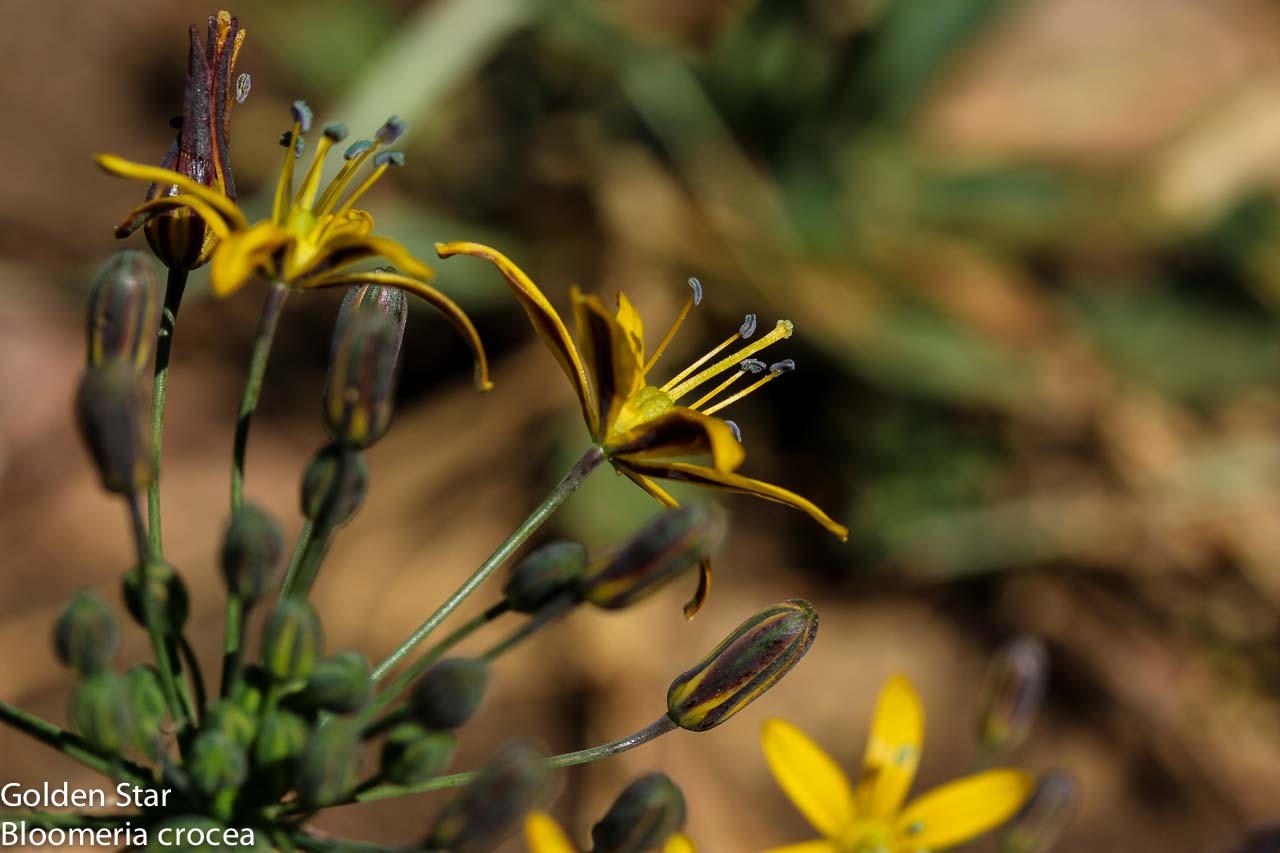 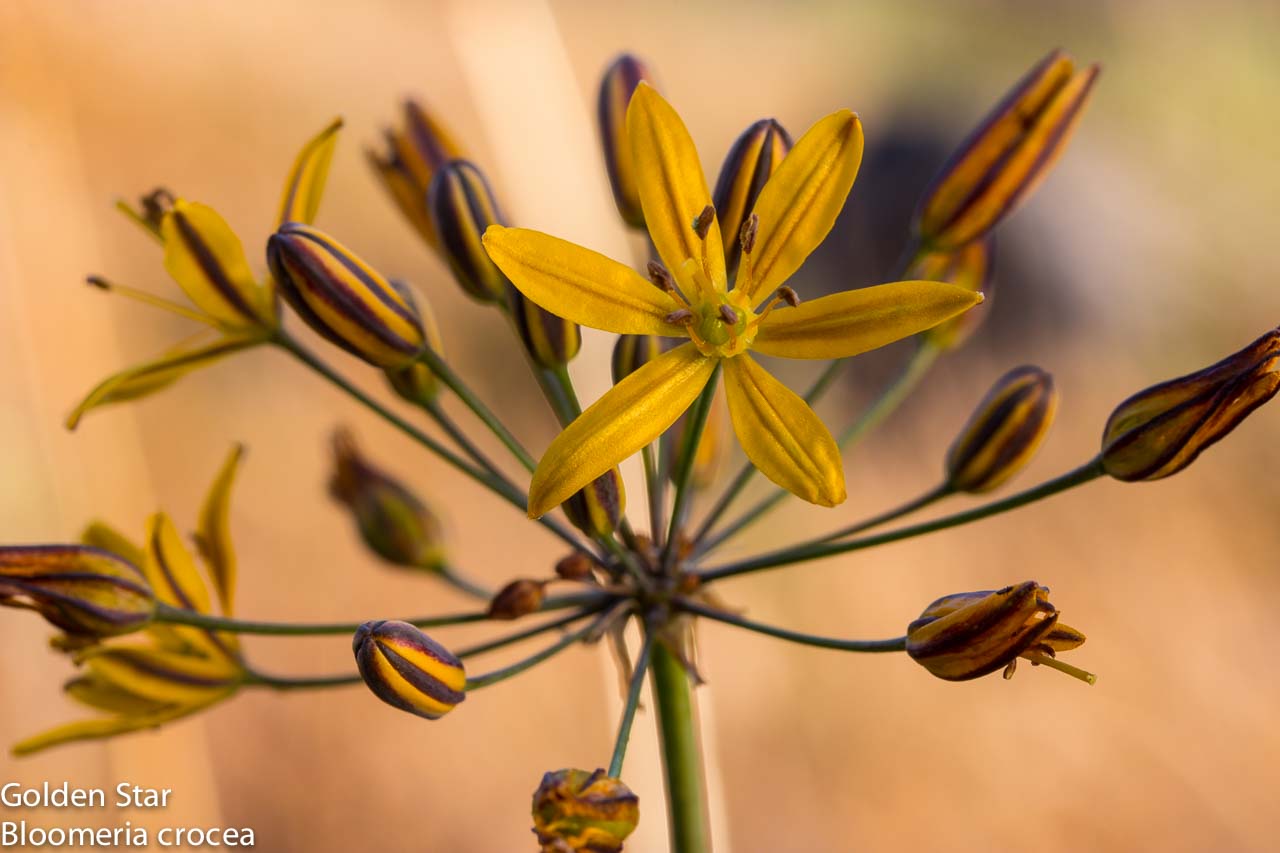 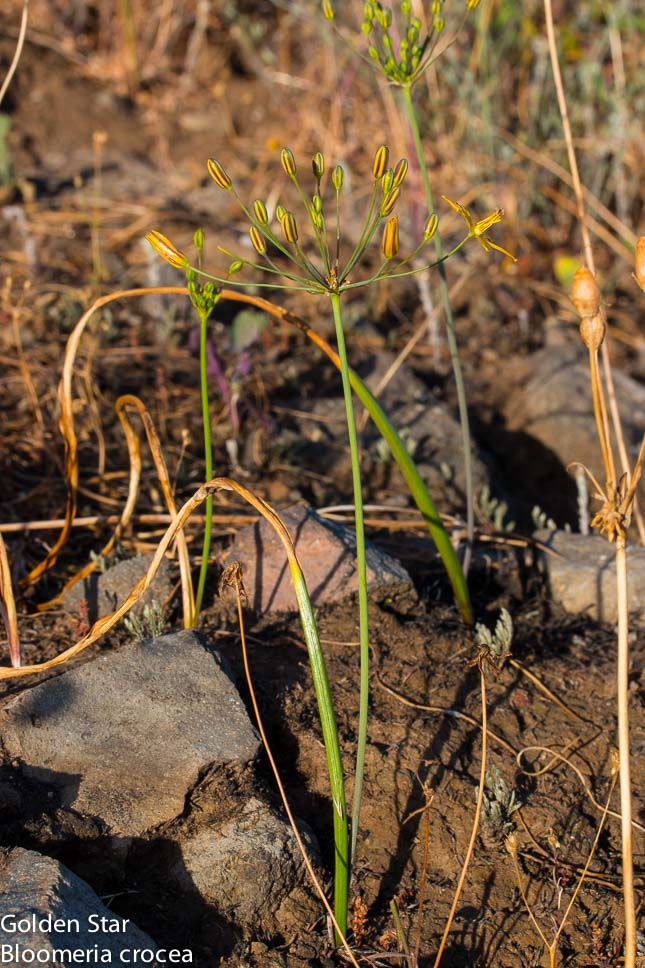 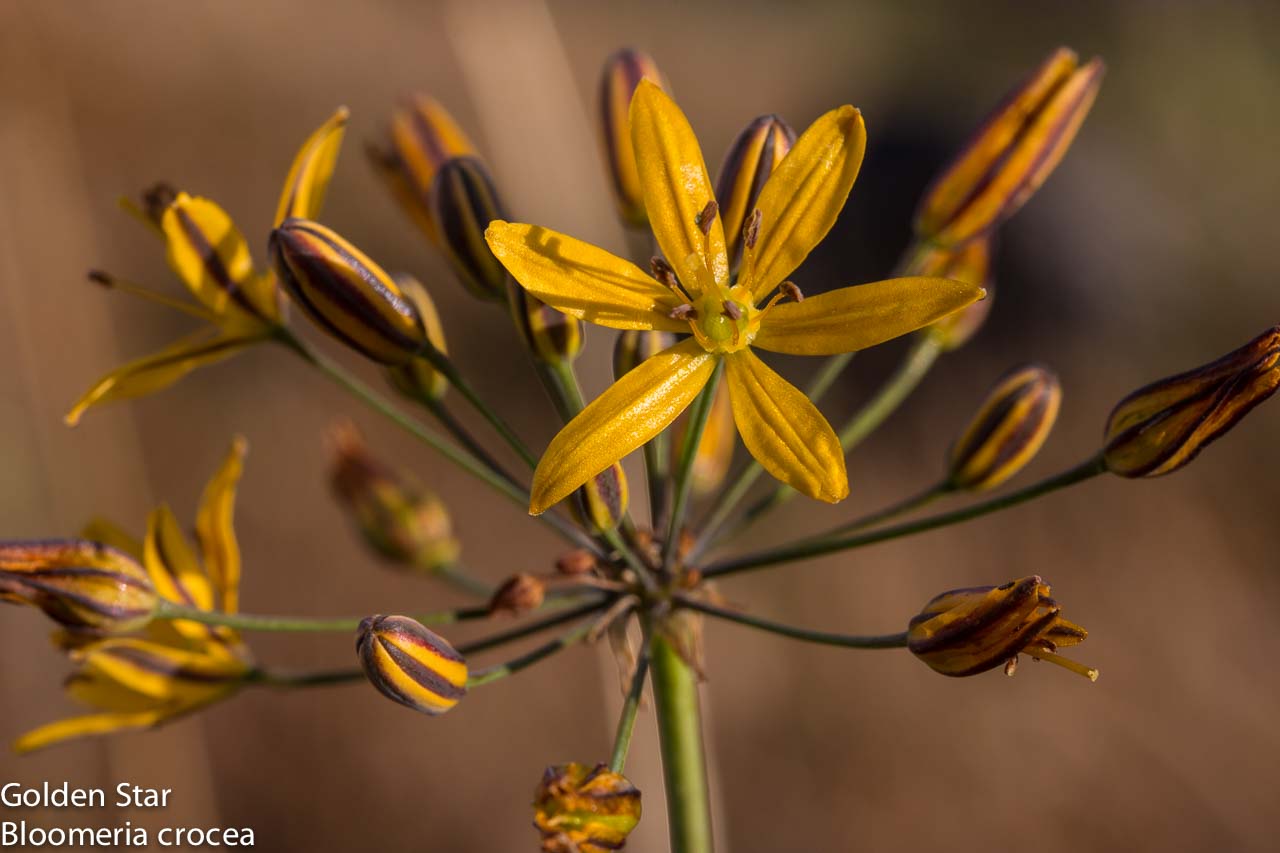 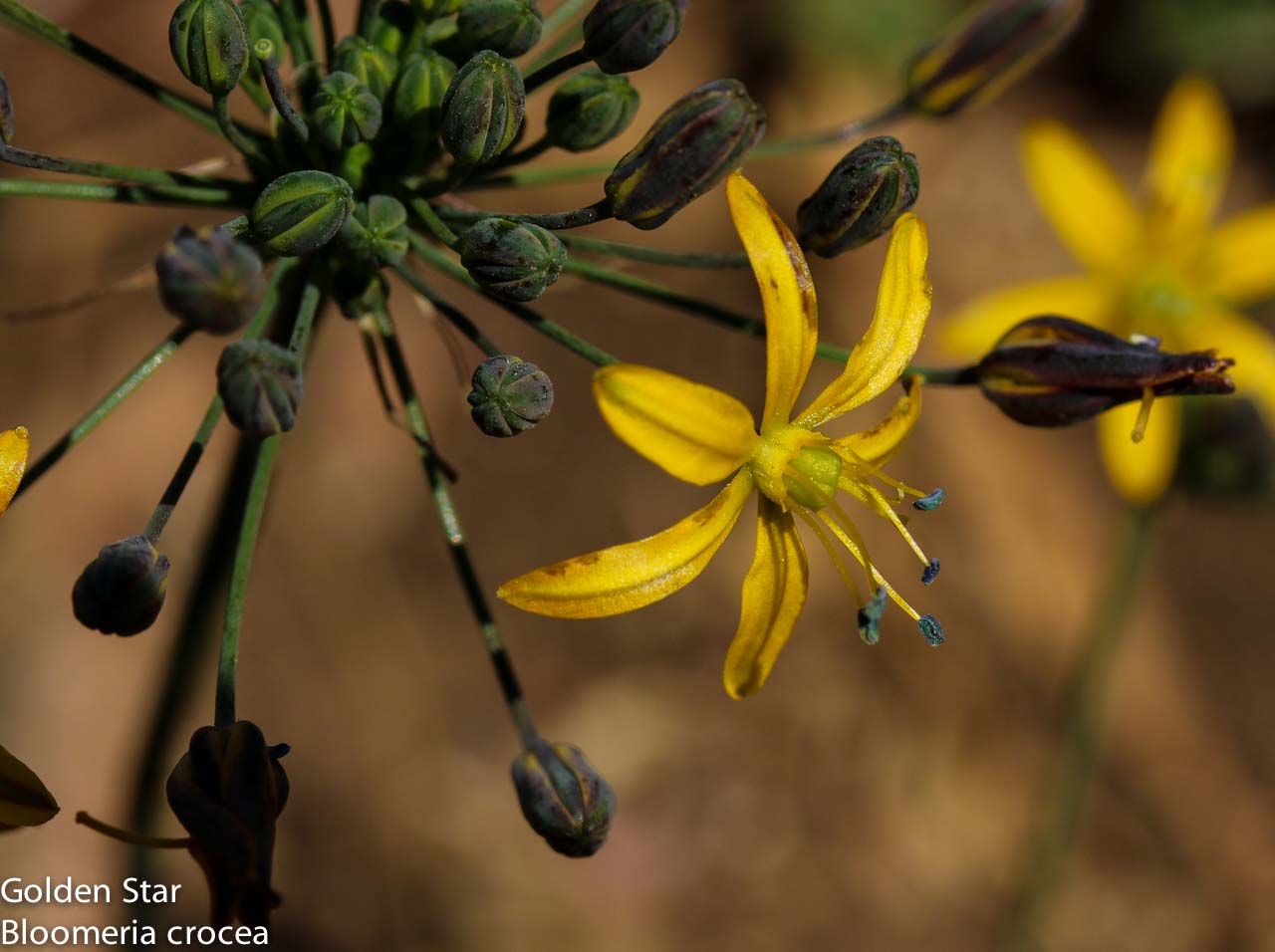 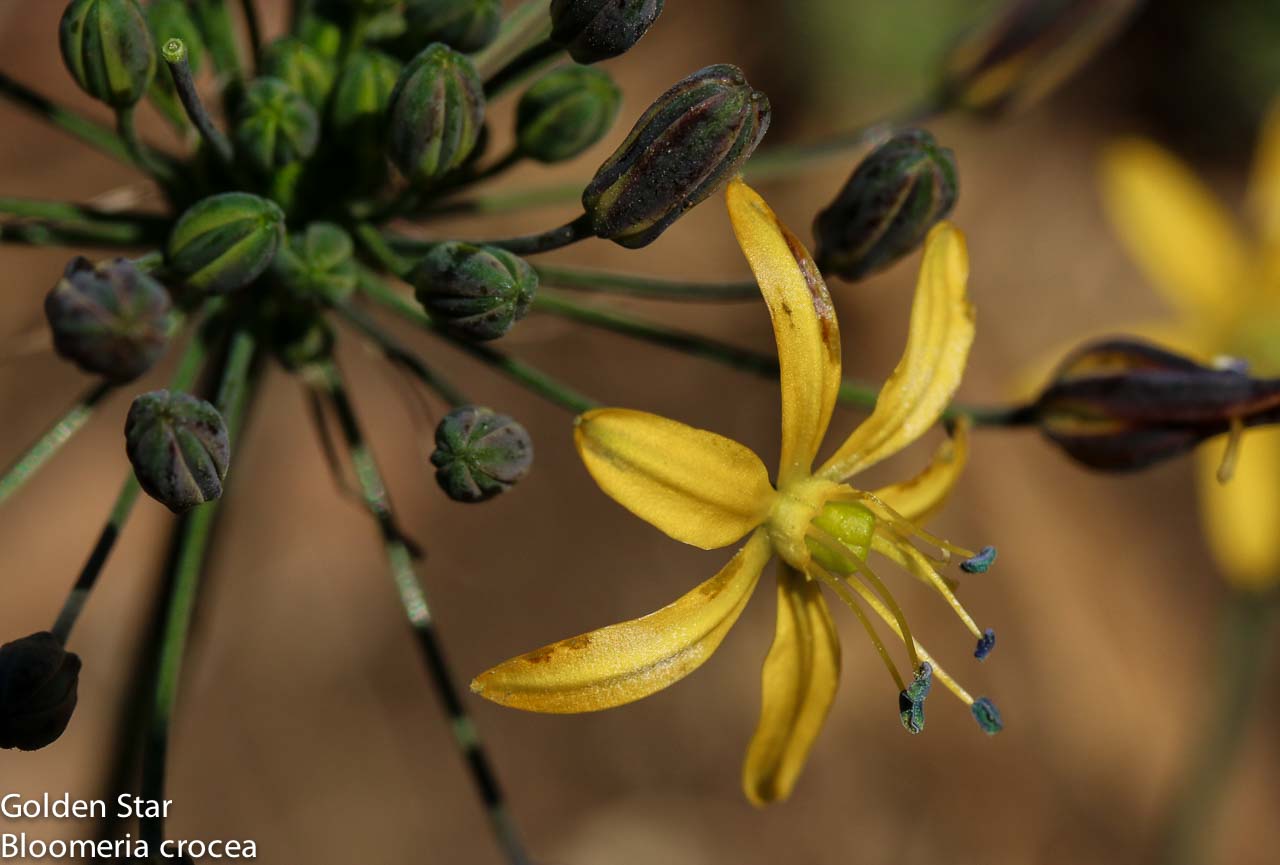 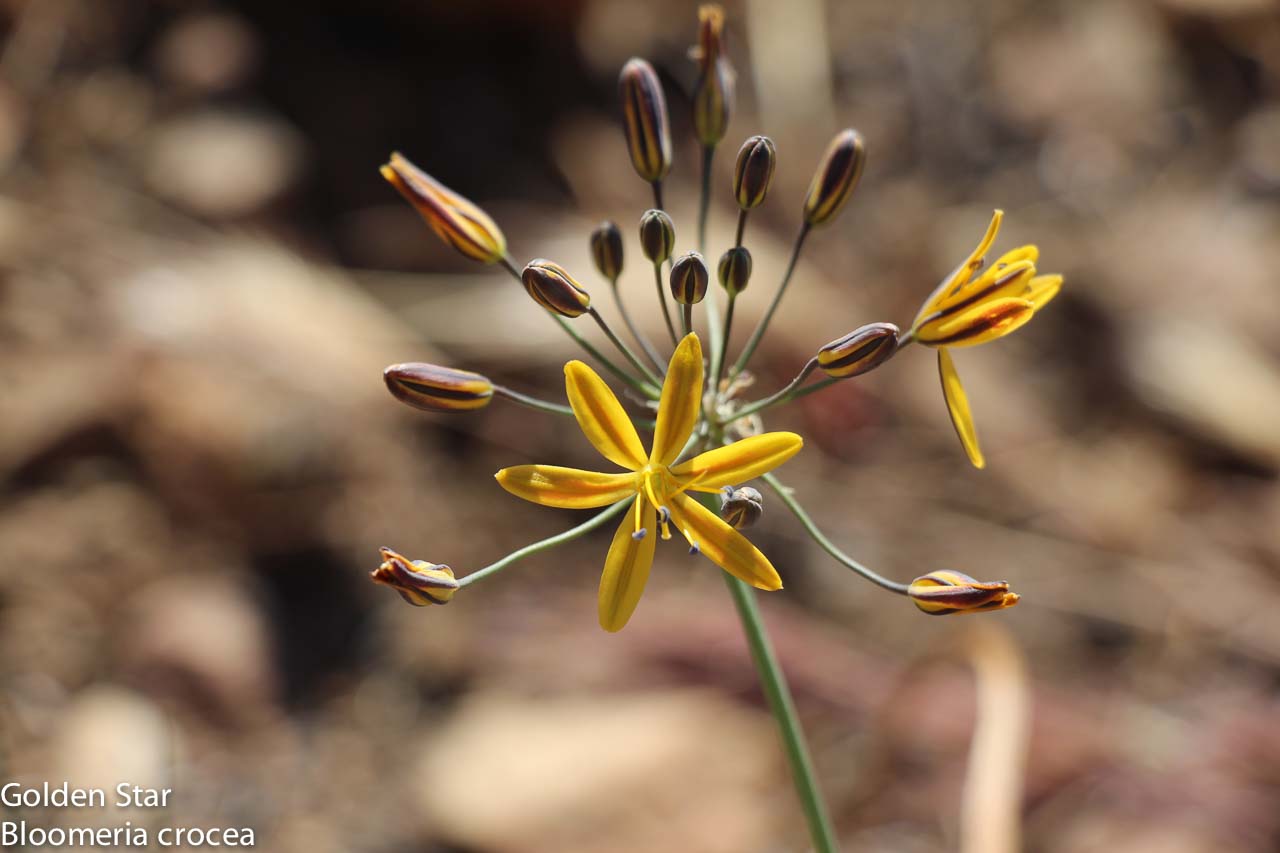 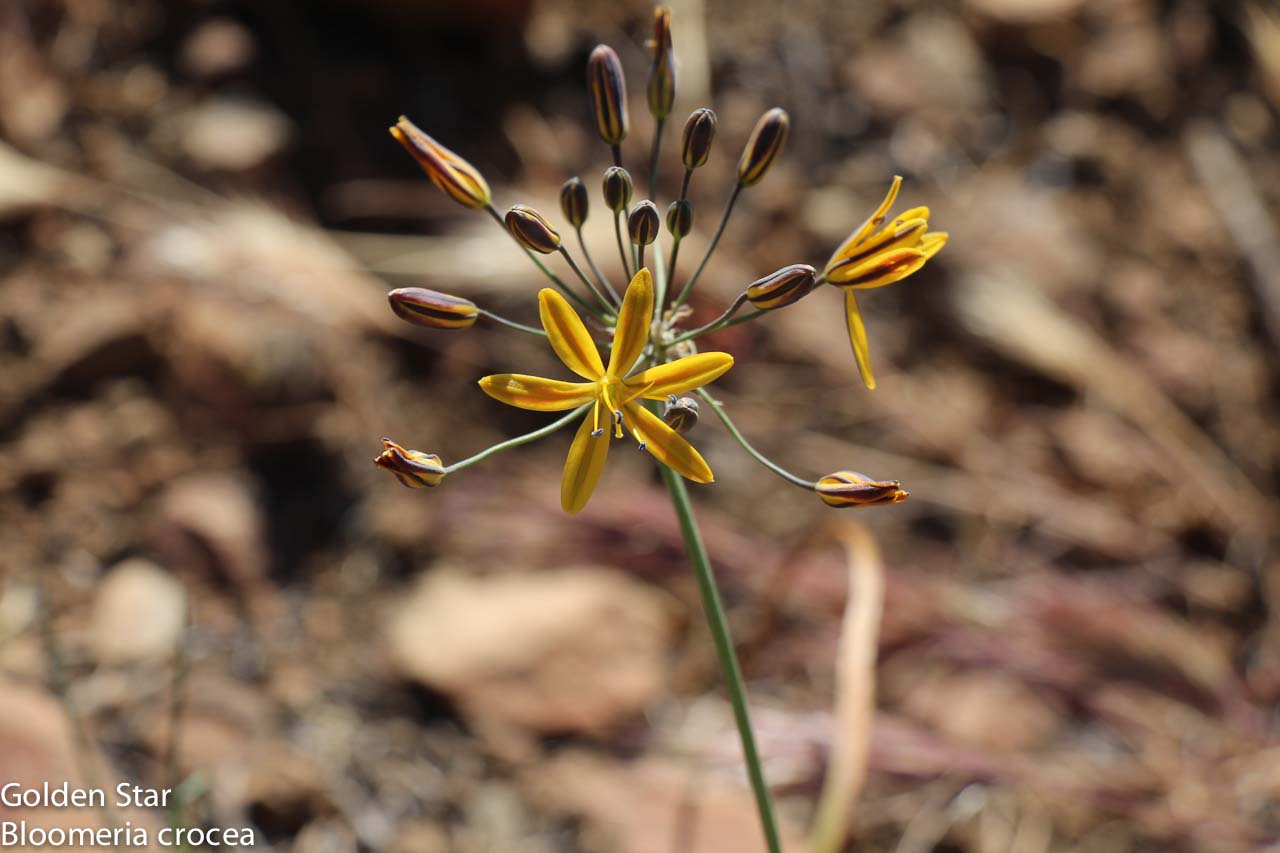 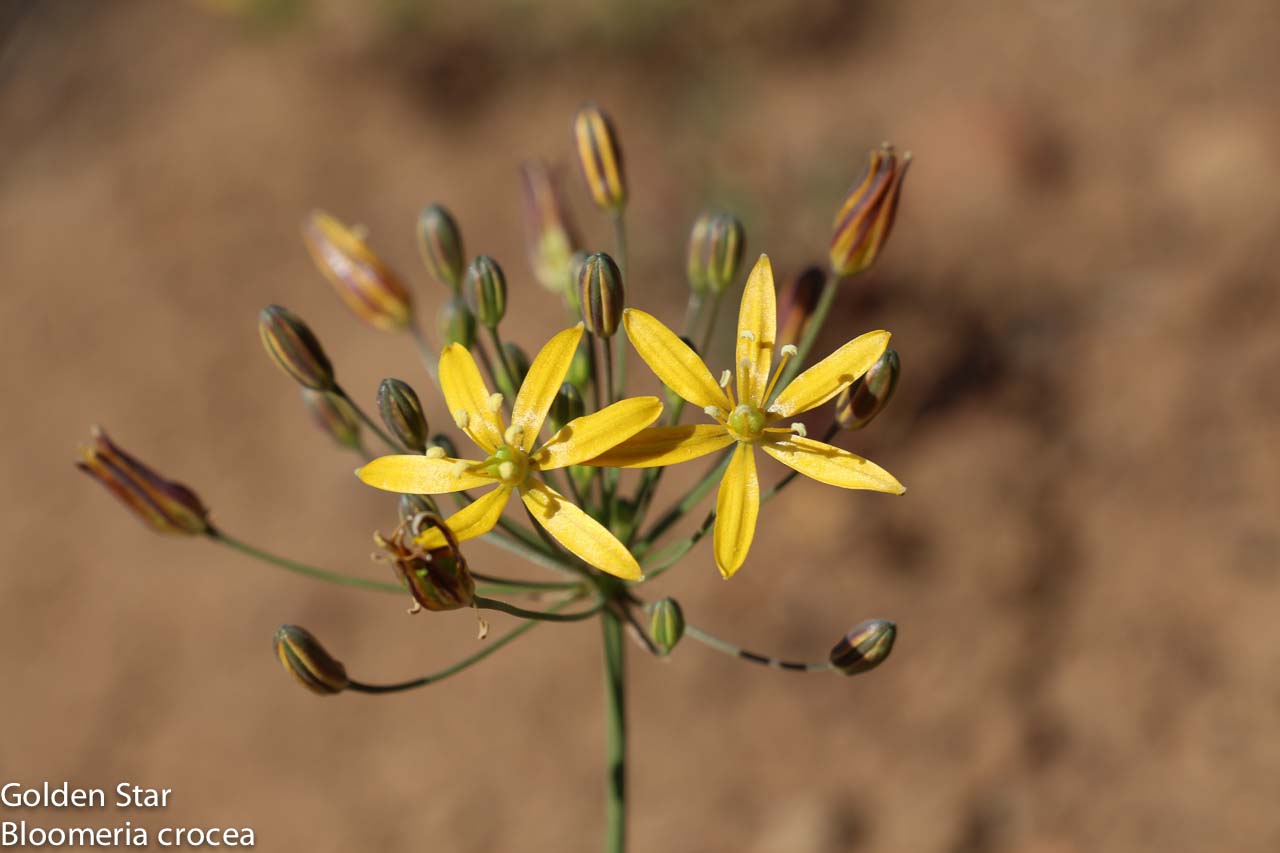 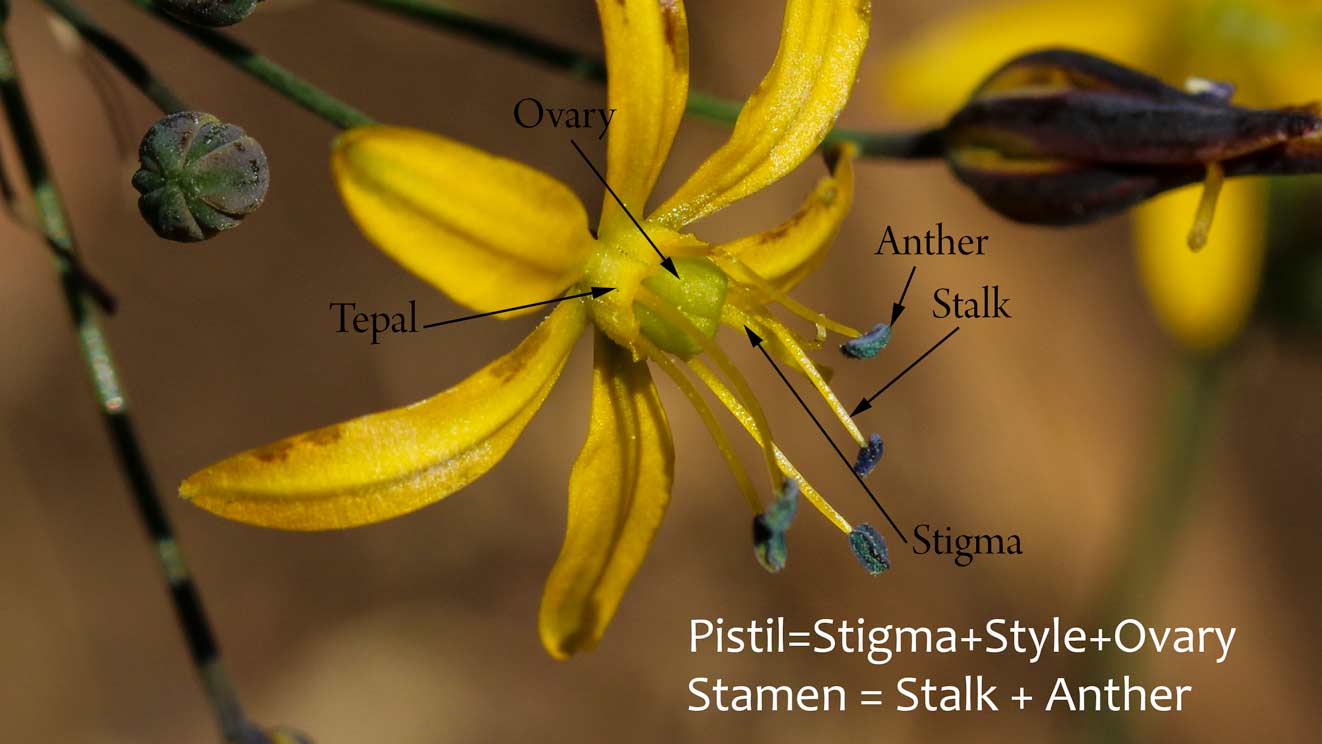 After the initial bloom of Spring fades, the dimunutive Goldenstar - Bloomeria crocea begins to bloom and take its turn in the spotlight. This plant is termed a geophyte. This means it has an underground storage organ (botanists call this a starchy corm) with a new corm arising each year from the old one. This organ allows the plant to live several years (perennial) and allows this plant to prosper after a fire has swept through an area. This plant has the ablity to grow from seeds or bulb. Another plant that you will often see with a similar corm are Blue Dicks.

Bloomeria crocea, is a perennial herb that is native to California. This plant usually has but a single leaf that typically dies back before the flowers begin to bloom. This plant is usually found in the following plant communities: Chaparral, Coastal Sage Scrub, Valley Grassland, Southern Oak Woodland, Foothill Woodland.

The flowers are at the end of umbrella like spokes radiating from the stalk. Botanists use the term umbel to describe this. From wikipedia: An umbel is an inflorescence which consists of a number of short flower stalks (called pedicels) which spread from a common point. Other plants with similar structures are Penisular Onion, Sanicle, Wild Carrot and Lantana. There can be more than 100 flowers on a plant with several buds opening every day (not all 100+ bloom at once!). Look carefully at the flower and you will see a cup formed by the fusing of the Tepal and the Anthers. This cup holds nectar for our pollinators.

The bulbs require three to four year' s to become mature enough to flower. The beautiful flowers on this plant are around for just a fraction of the life span of this plant. If you see one of these plants on the trail stop and observe the anthers, if you are lucky they will be coated with blue pollen. Look at how the blooms are in various stages from closed bud to dying bloom.

The bulbs were used by the Indians for food — eaten raw. Some native Americans used the corms of Bloomeria crocea to make a starchy sealant to close the gaps of seed-gathering baskets. The fibrous skin was removed and corms were rubbed on a grinding stone.