Plant of the Month - Sawtooth Goldenbush 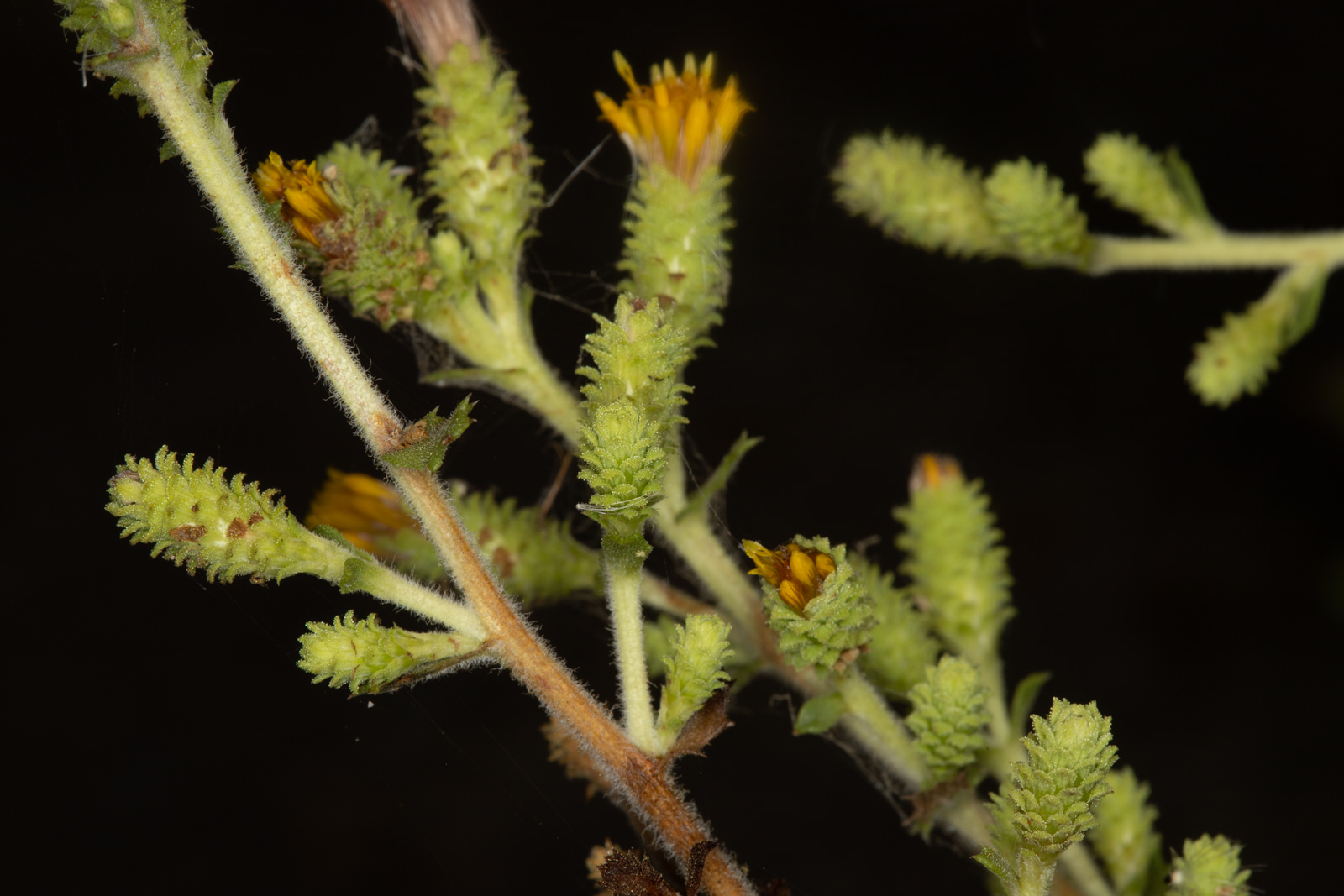 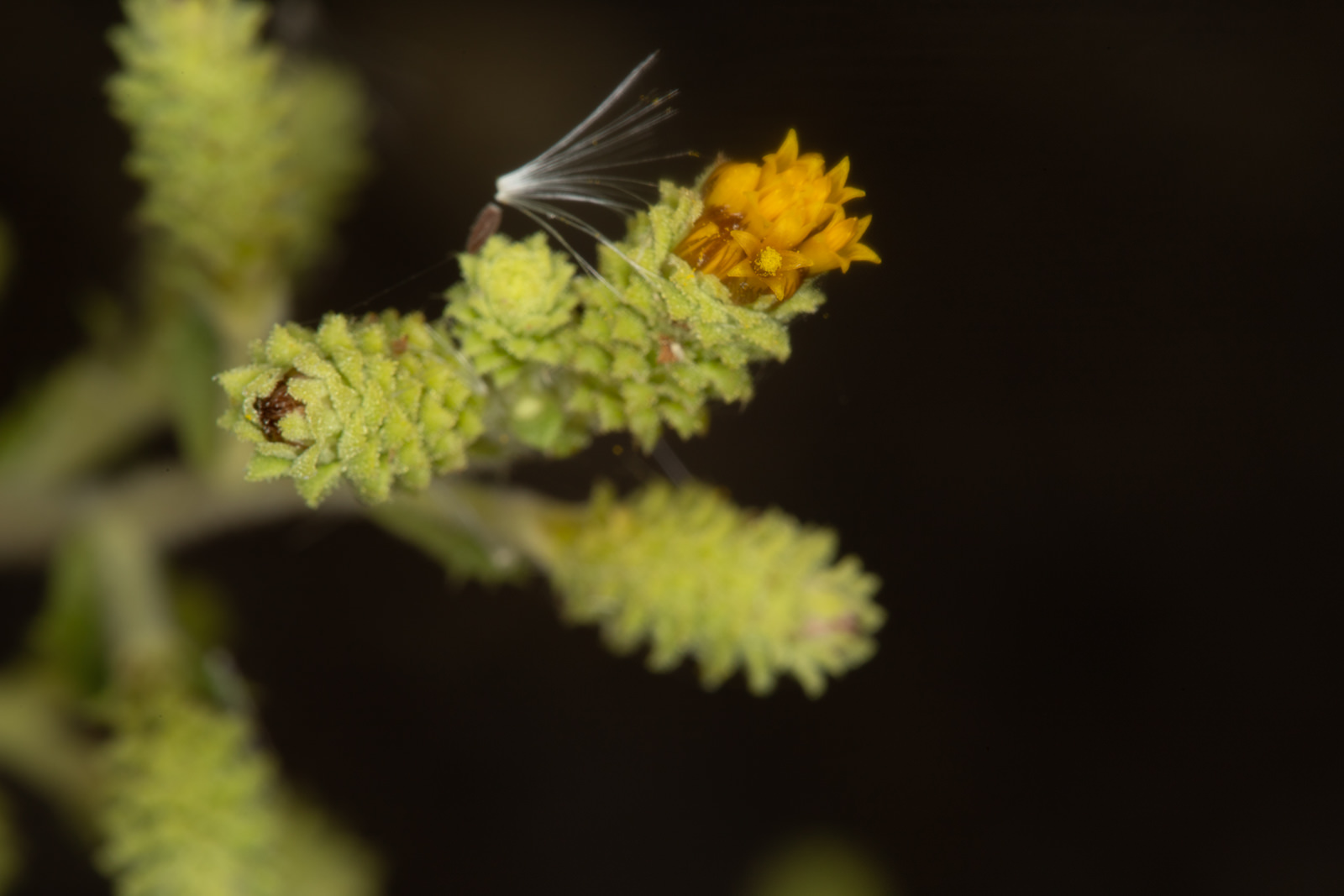 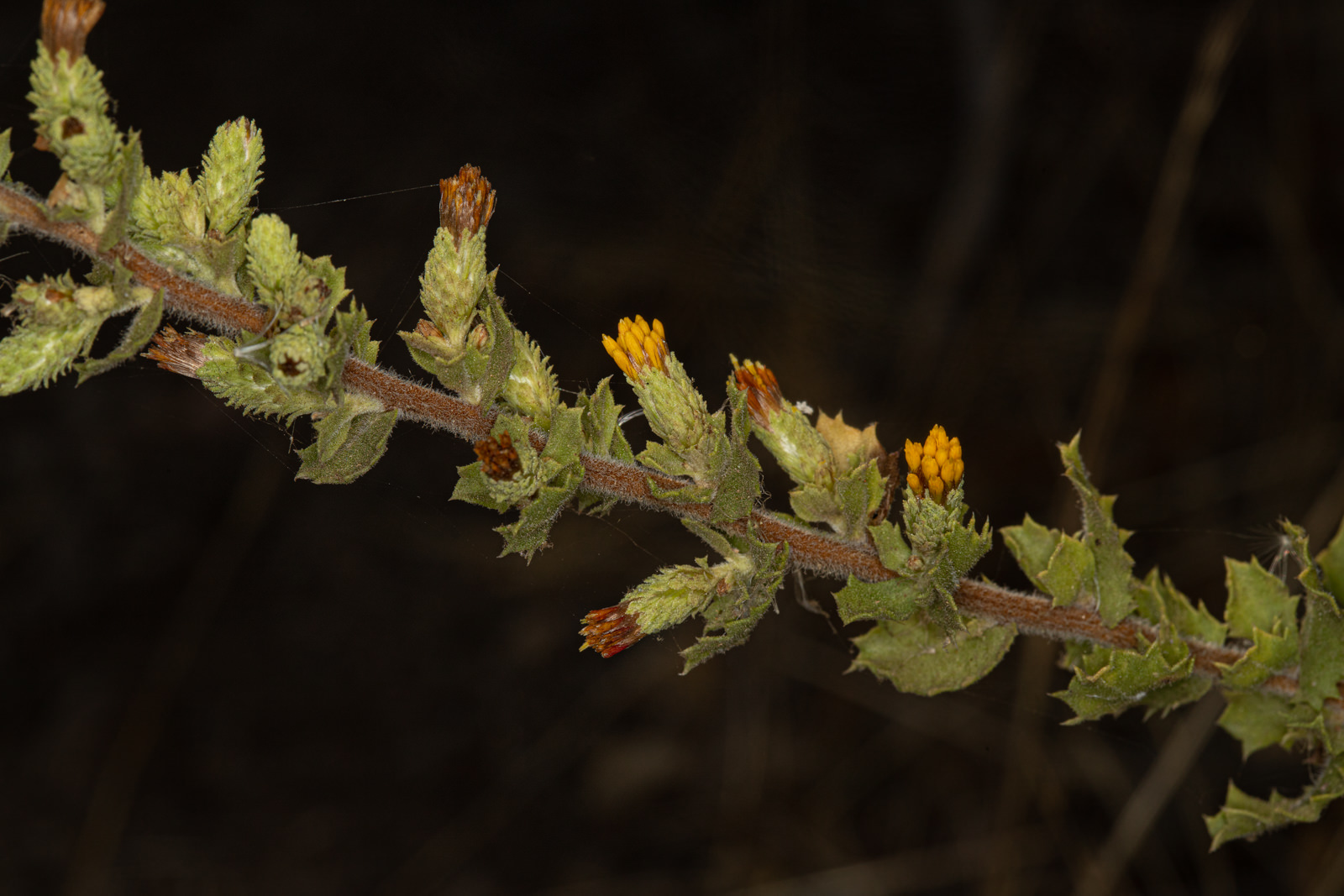 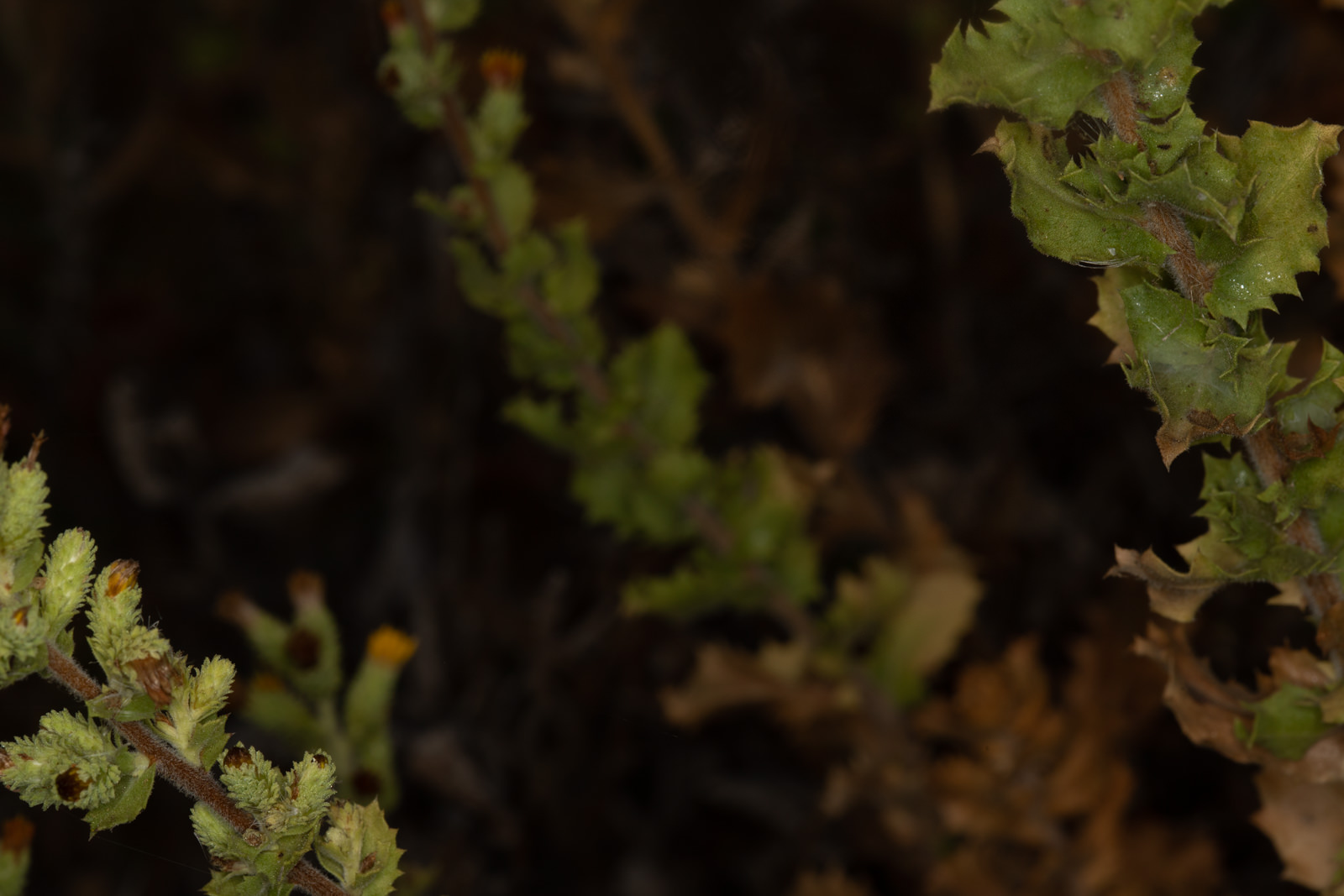 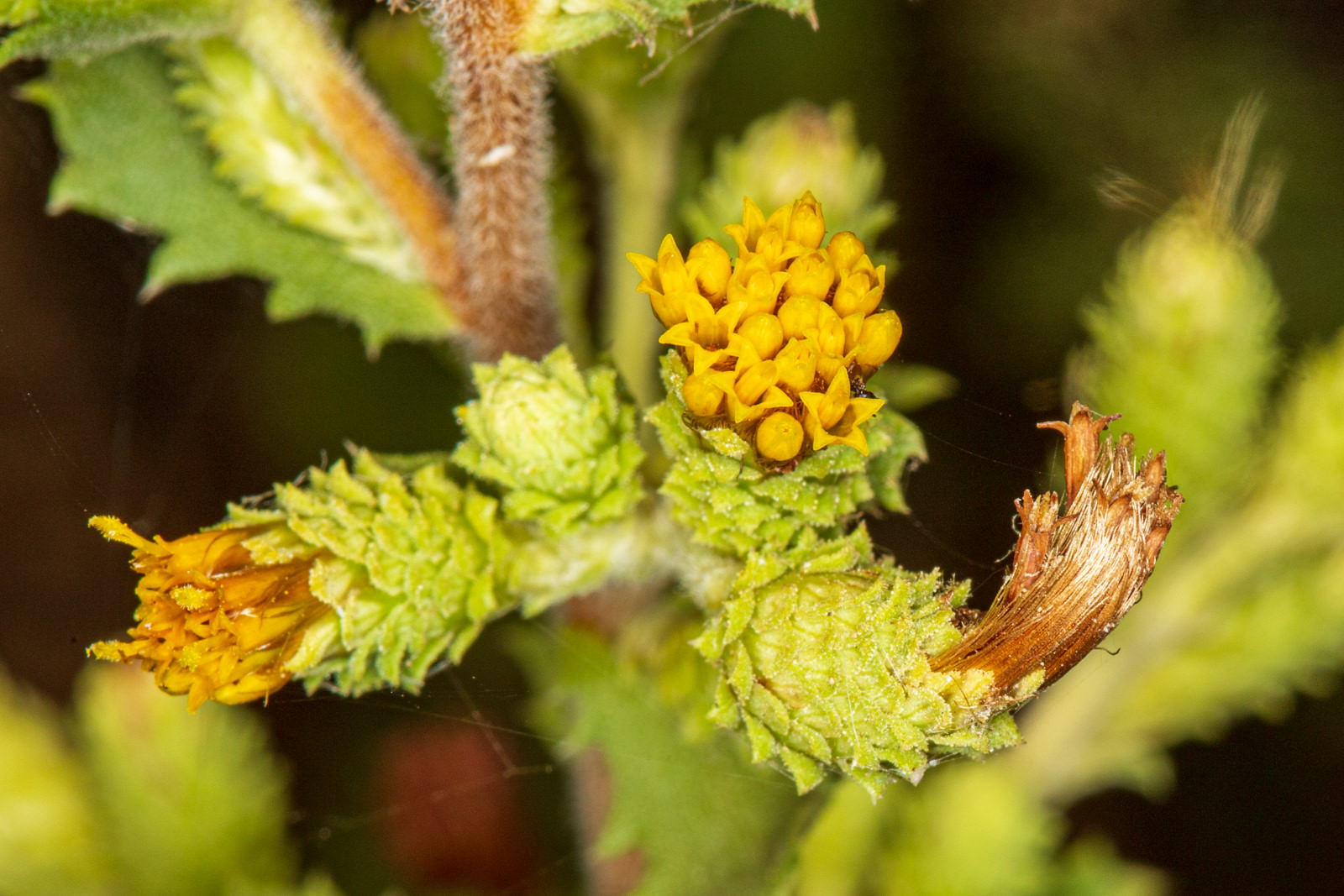 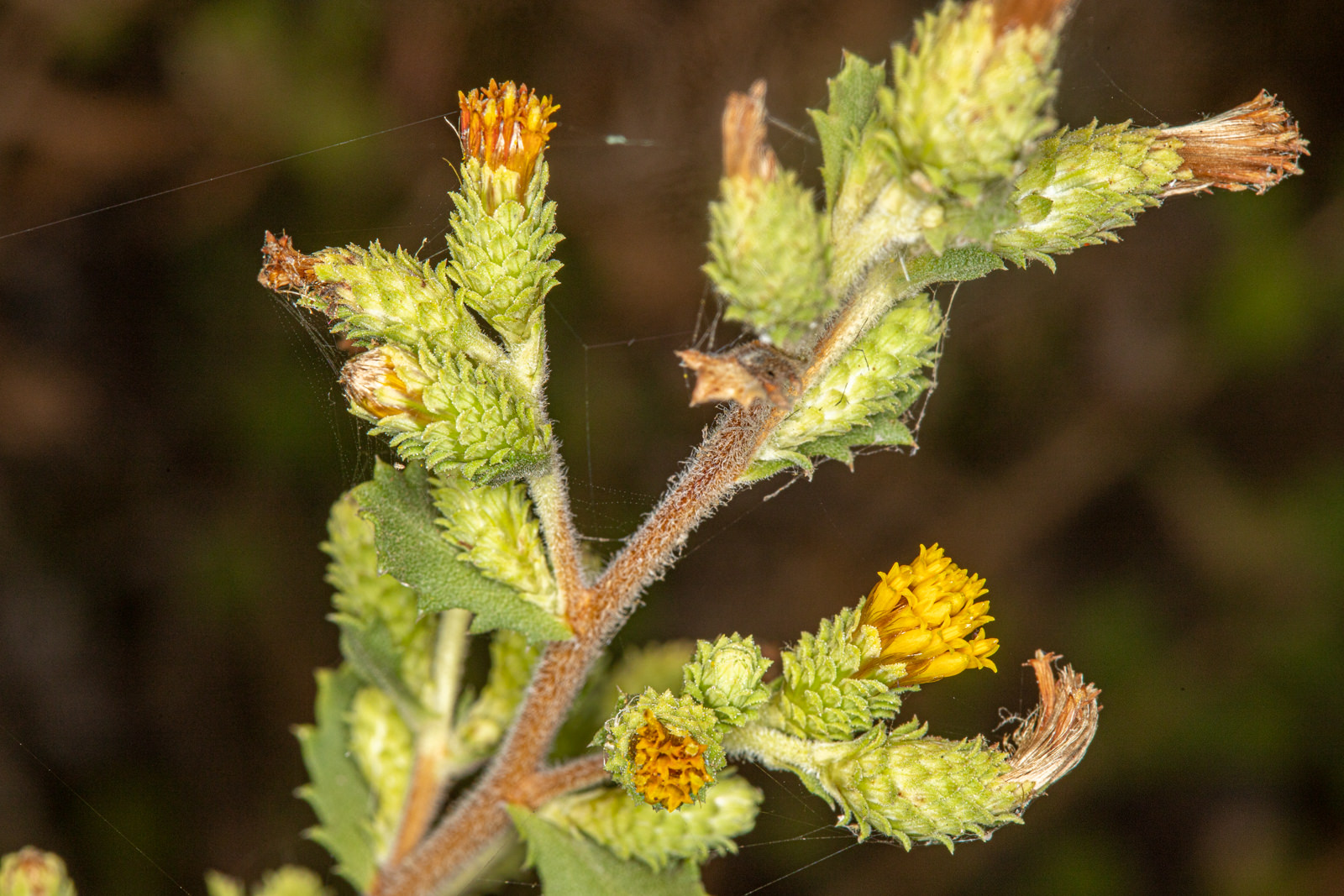 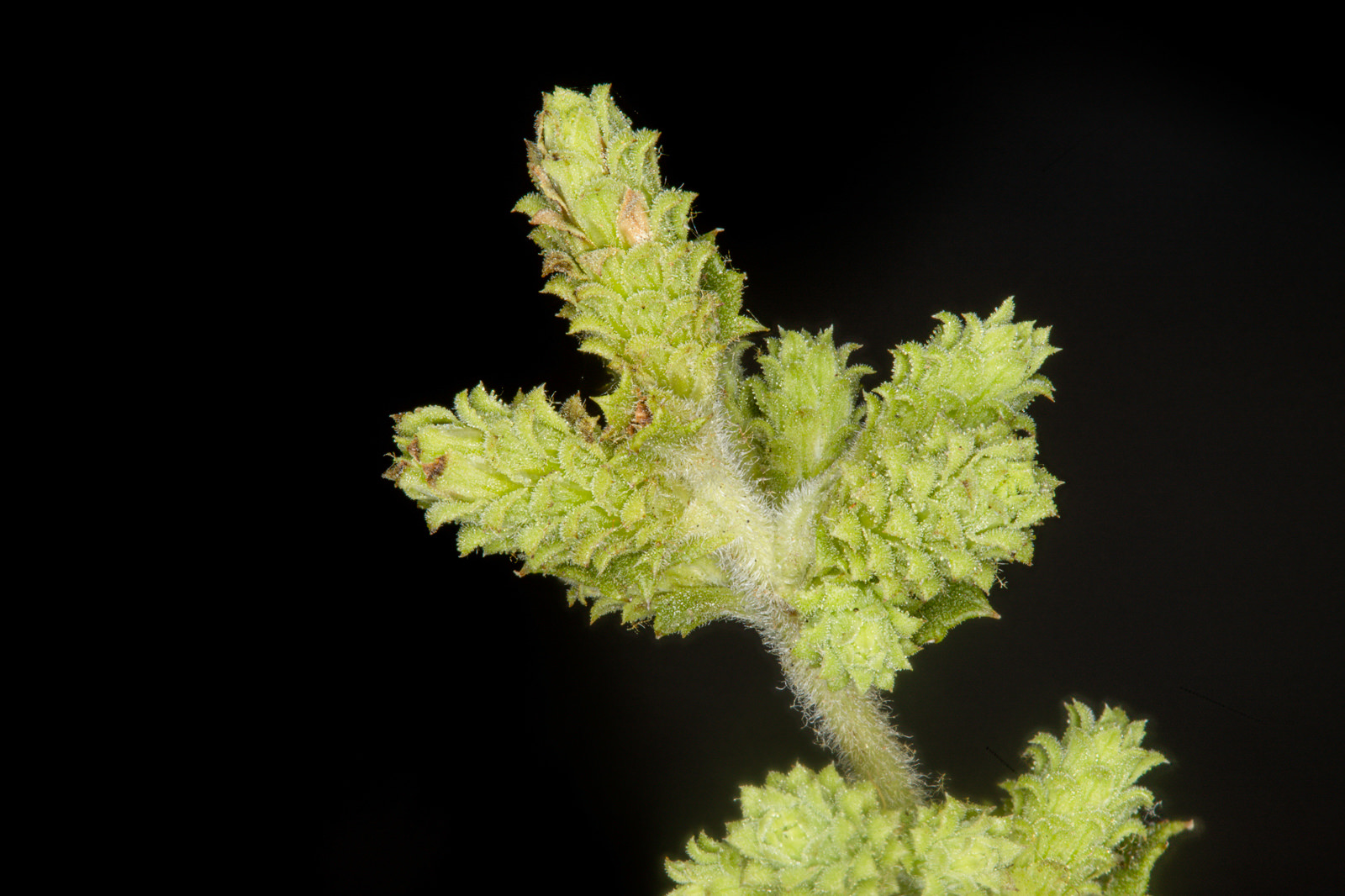 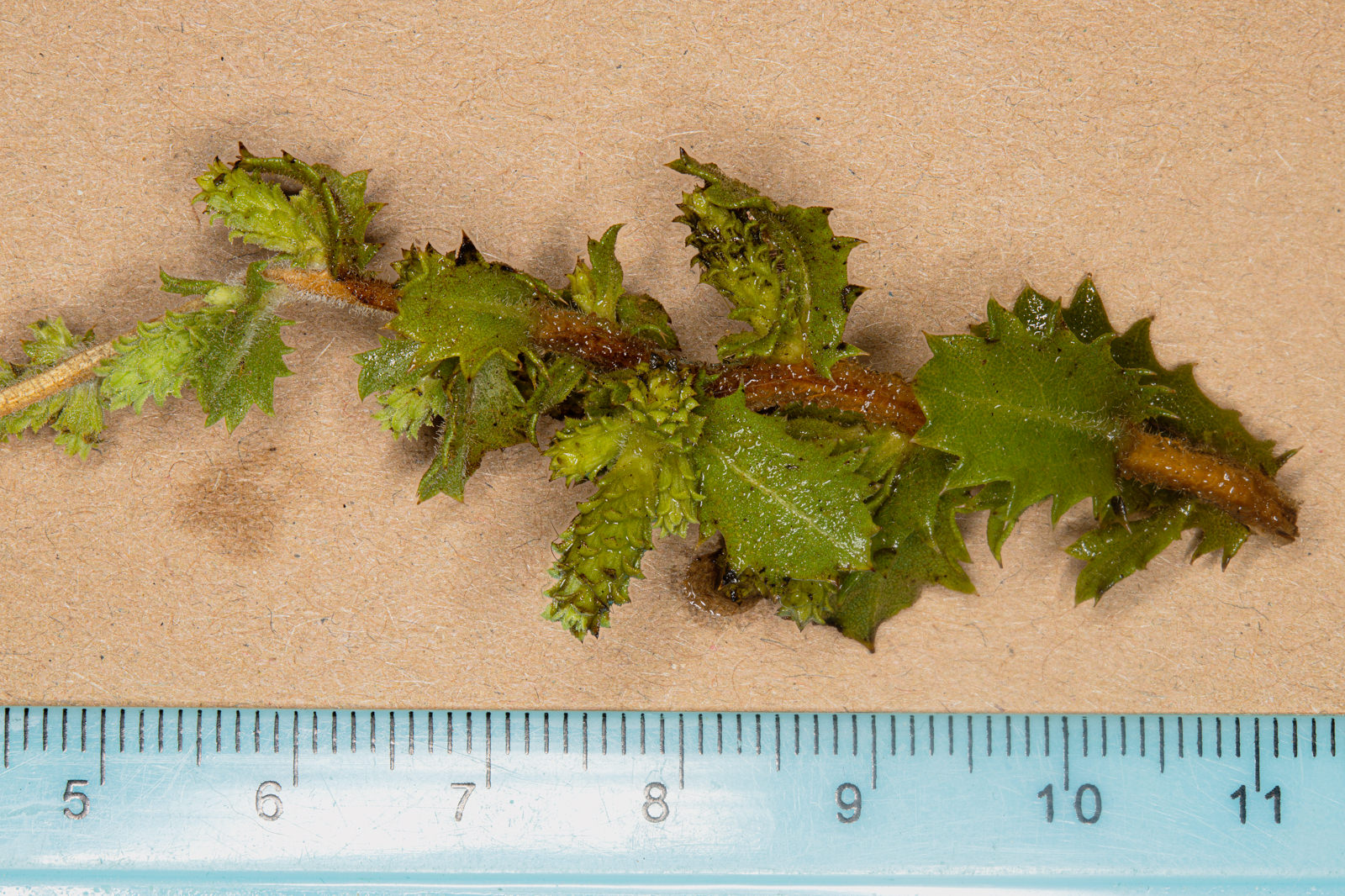 Sawtooth goldenbush (Hazardia squarrosa) is a native plant in the Sunflower family that blooms in the Summer/Fall. Tiny yellow flowers that resemble flowering pine cones and sharply pointed, holly-like leaves are what distinguish this plant from another similar plant - goldenbush (Isocoma menziesii) often found in the same locations. Both species are late summer bloomers, providing an important nectar source for pollinators. Preferred habitat: dry, open chaparral, below 4000 feet (1250 m) occasionally in sage scrub and grasslands.

Sawtooth goldenbush can take different forms: upright or spreading, a multi-branched sub-shrub. Typically, less than three feet (1 m) high. - leaves are opposite. Look for outer branches covered with loose white hairs and branching at sharp angles. The leaves are small and oval, thick and leathery, clasping the stem directly. Leaves are generally less than 1.5 inches ( 4 cm) long with sharp teeth on the margins. Leaf is smoother on top and the bottom may have white hairs lots of white hairs.

Looking carefully at the flowers reveals that a series of overlapping phyllaries (individual bracts) resemble a pine cone. with a flower poking out of the top. This flower is a composite but lacks ray florets (typically composite flowers can be either disk floret only, ray floret only or having both disk and ray florets). These florets are corralled into a common base (receptacle), appearing to be a single flower. Many plants with clusters of flower will bloom at the same time and provide a splash of color to make their presence known. Not this one. Blooms are scattered throughout the plant at differing times. The plant blooms in the months between June and October. Seeds are dispersed by the wind.

Native Peoples boiled sawtooth goldenbush in water to use for bathing, which was thought to be a cure for general bodily aches and pains.

Like other plants that bloom in the Summer, over time a Cost Benefit Analysis of sorts has been done. The best choice for one species may not work for another. Plants that bloom in the late Summer or Early Fall have less competition for pollinators but more limited access to water. There is a cost for limiting transpiration. Water loss from photosynthesis occurs during the exchange of gasses (carbon dioxide and oxygen); less transpiration reduces the amount of conversion to oxygen and organic compounds that feed the plant. Trading faster growth and seed production for drought tolerance and the chance of more successful pollination has worked for the continuation of this species.

Link to Calfora.net - the best source of this fascinating information! Hazardia: named after Barclay Hazard (1852-1938), a California botanist, born in Newport, RI and not the sharp pointy leaves. squarrosa:means either "scaly or rough" or "with the leaves spreading at right angles.