Plant of the Month - Telegraph Weed 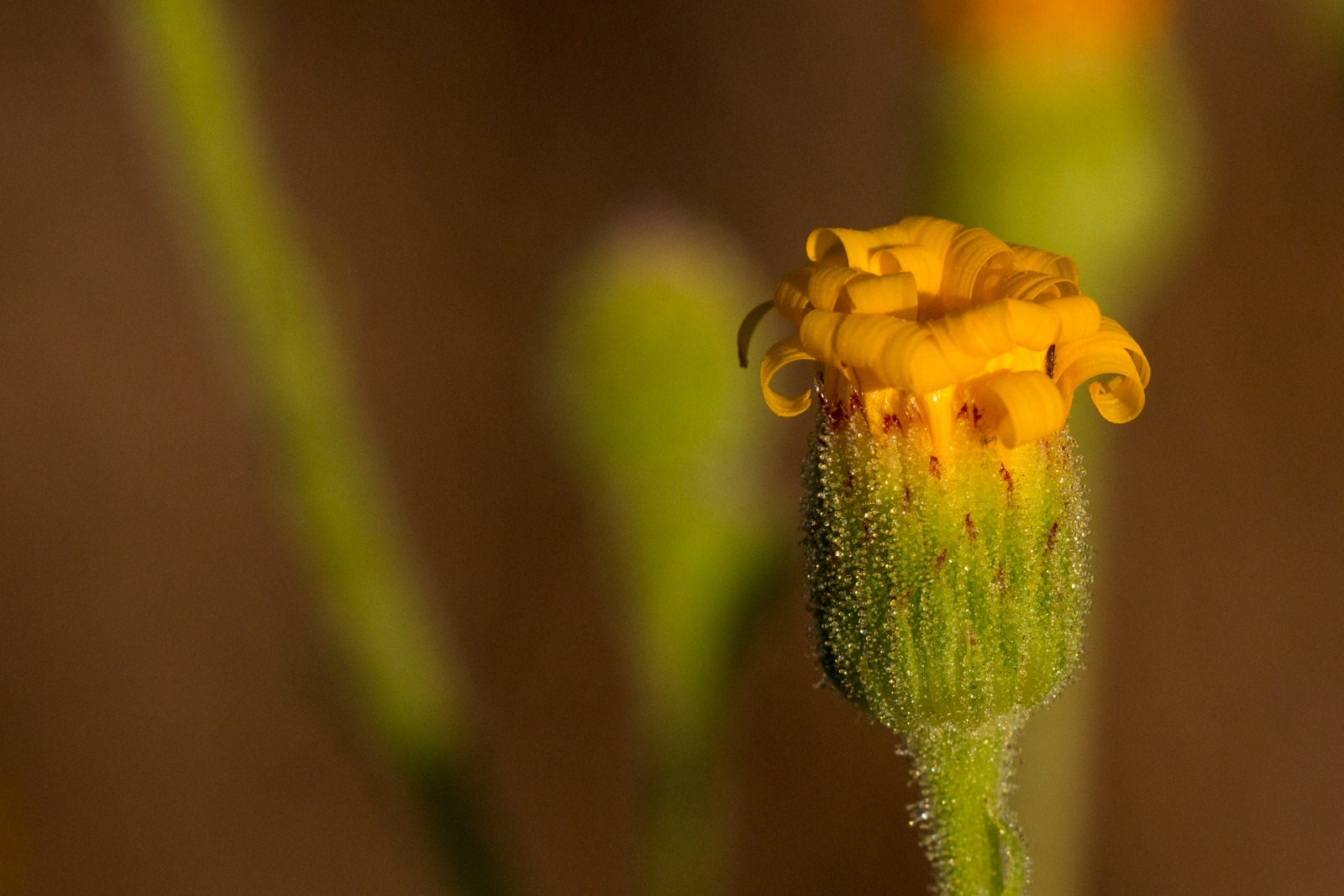 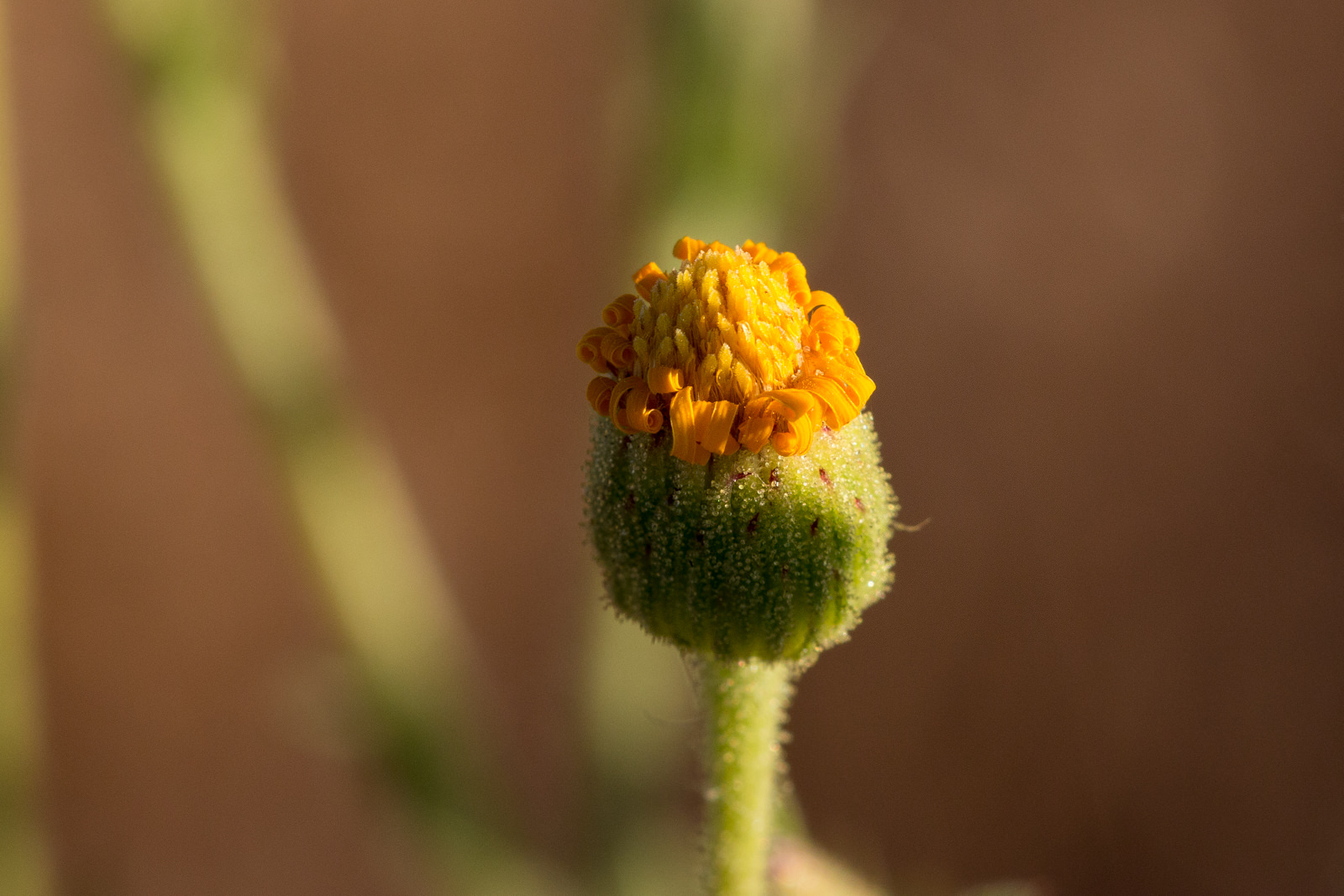 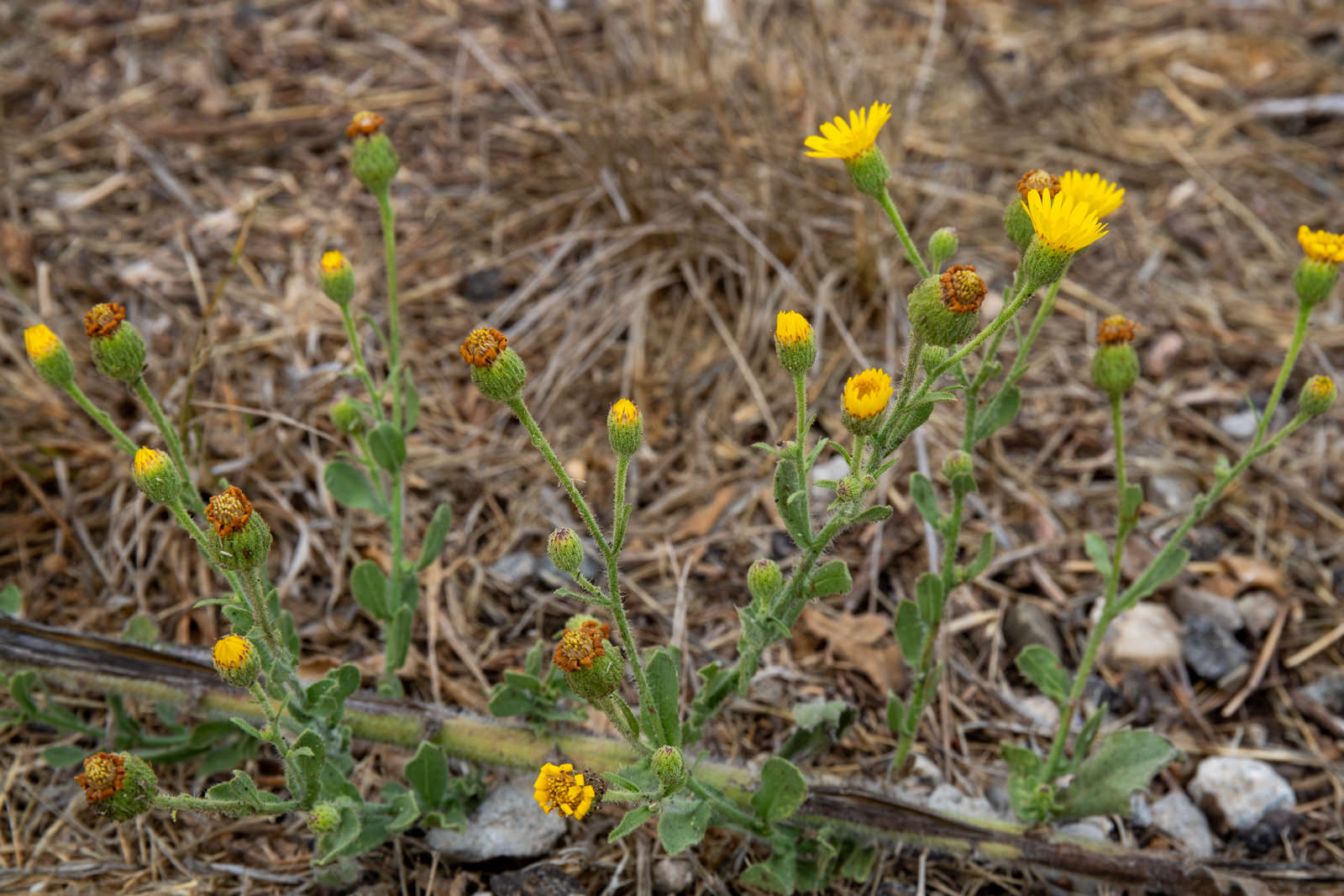 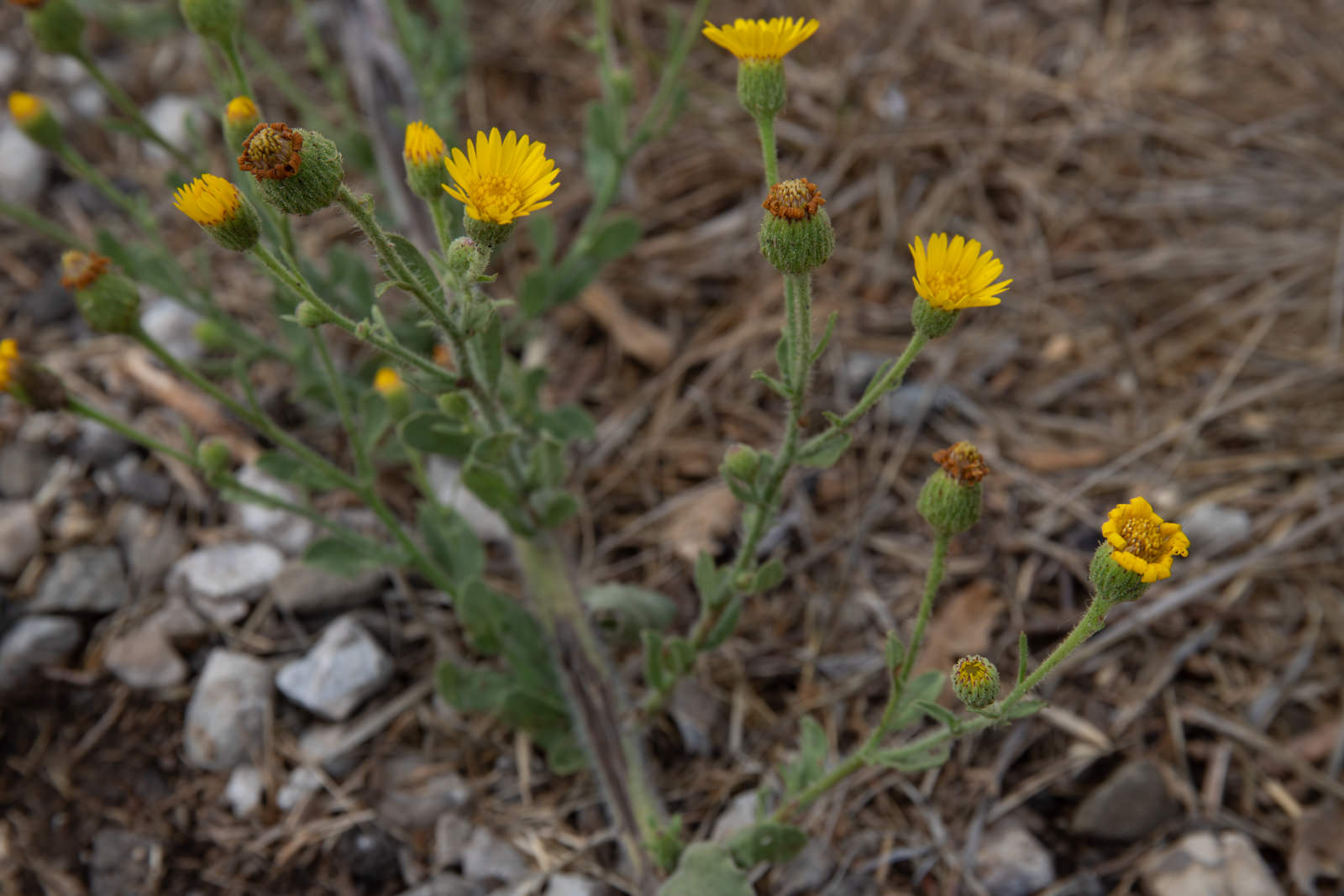 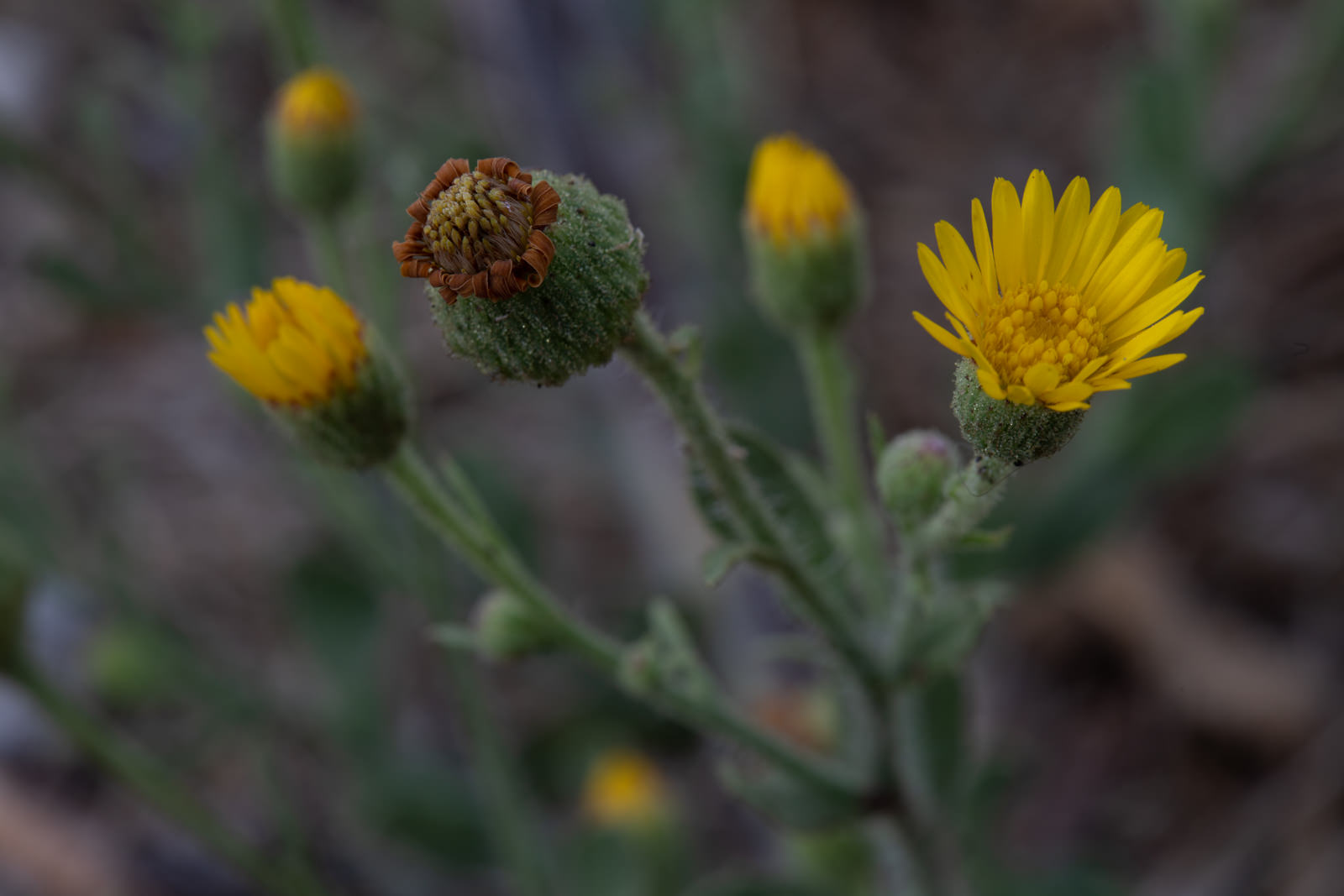 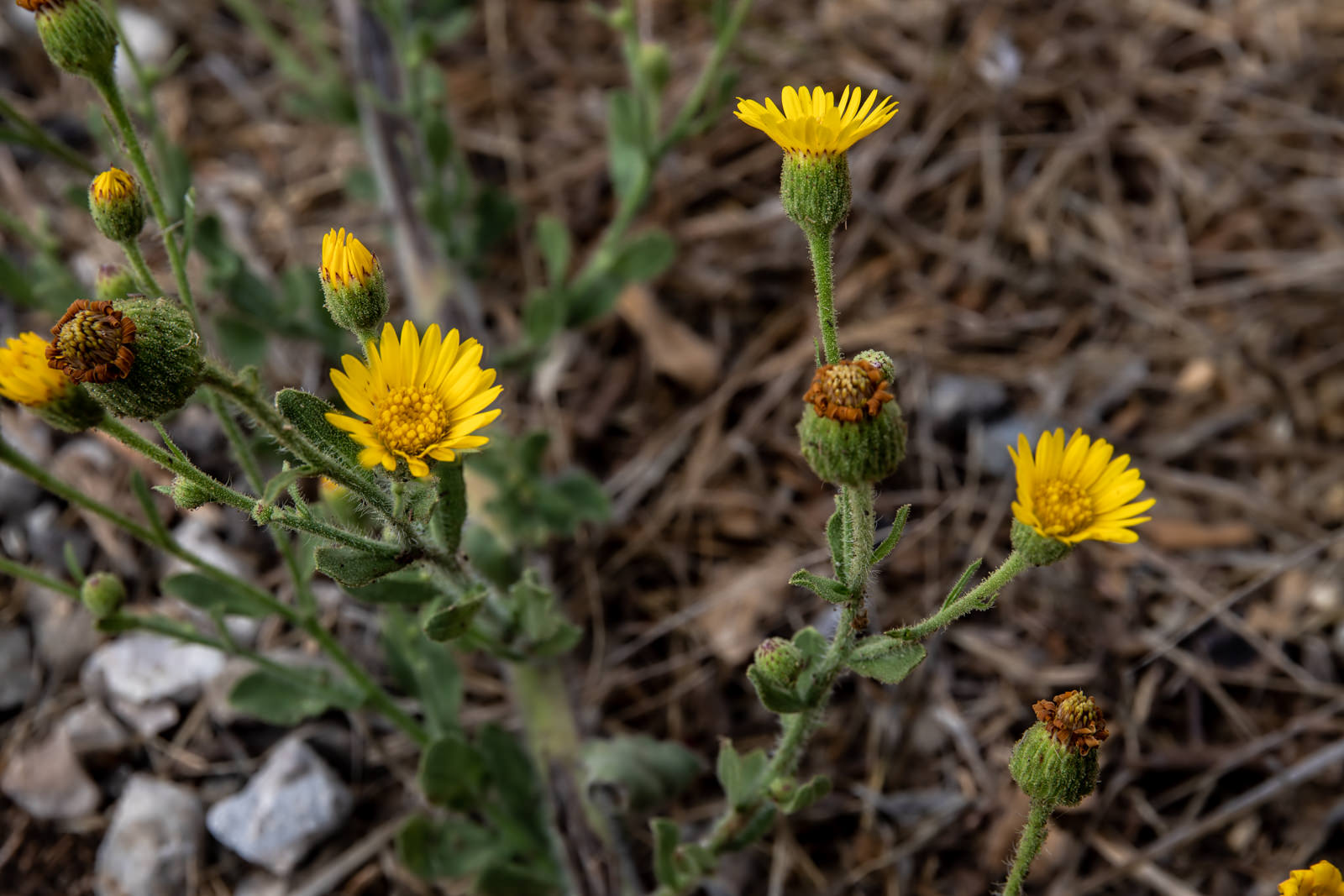 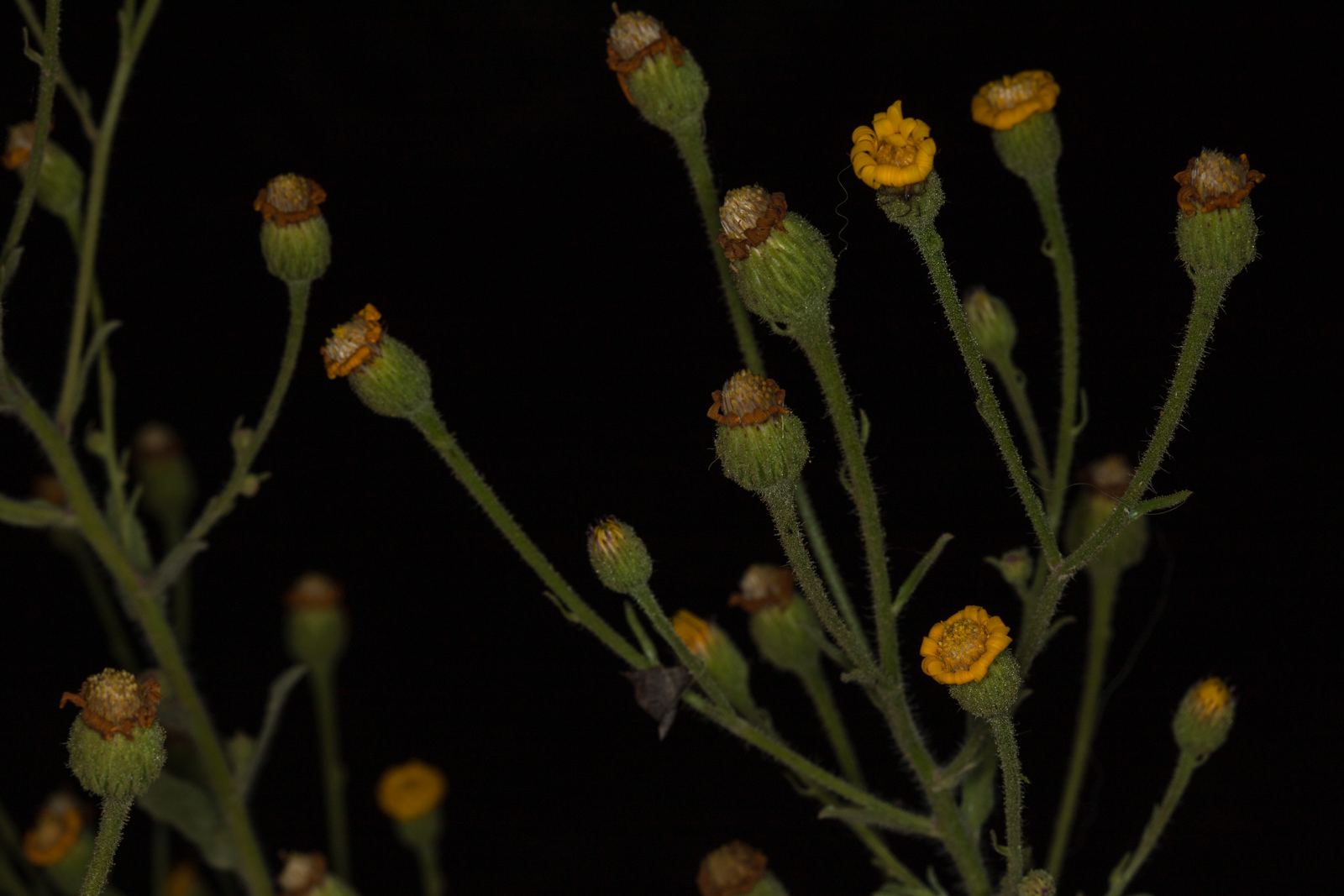 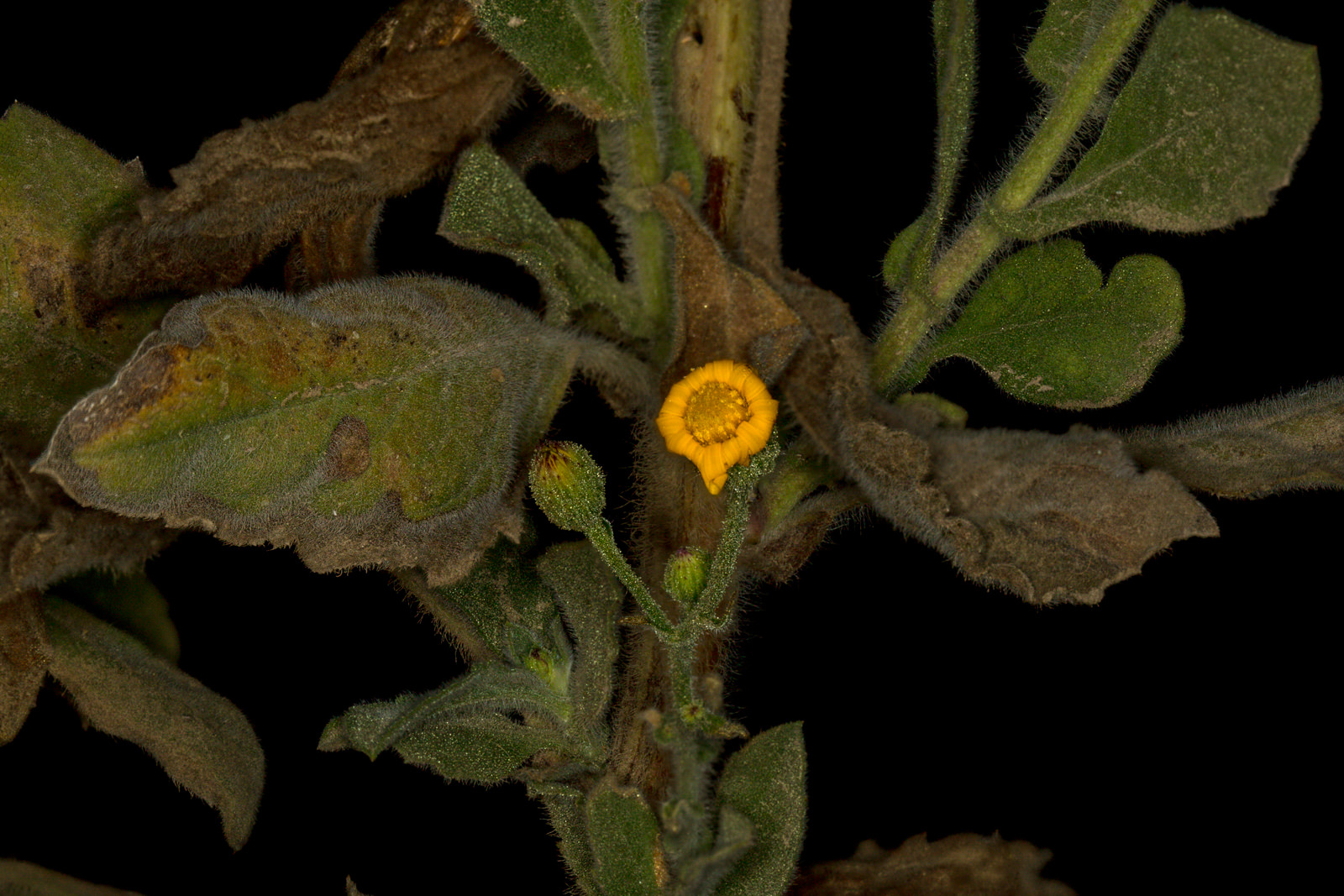 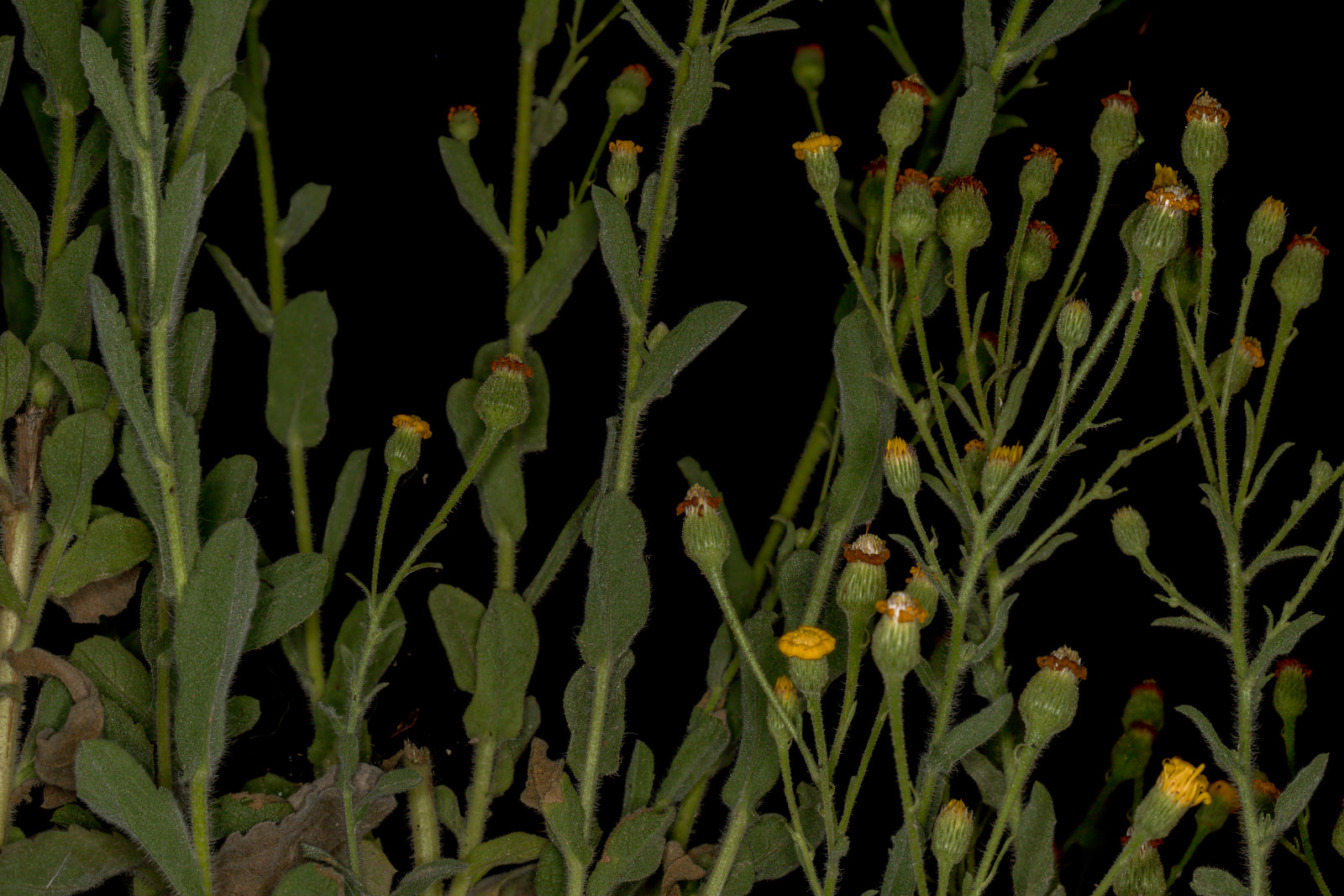 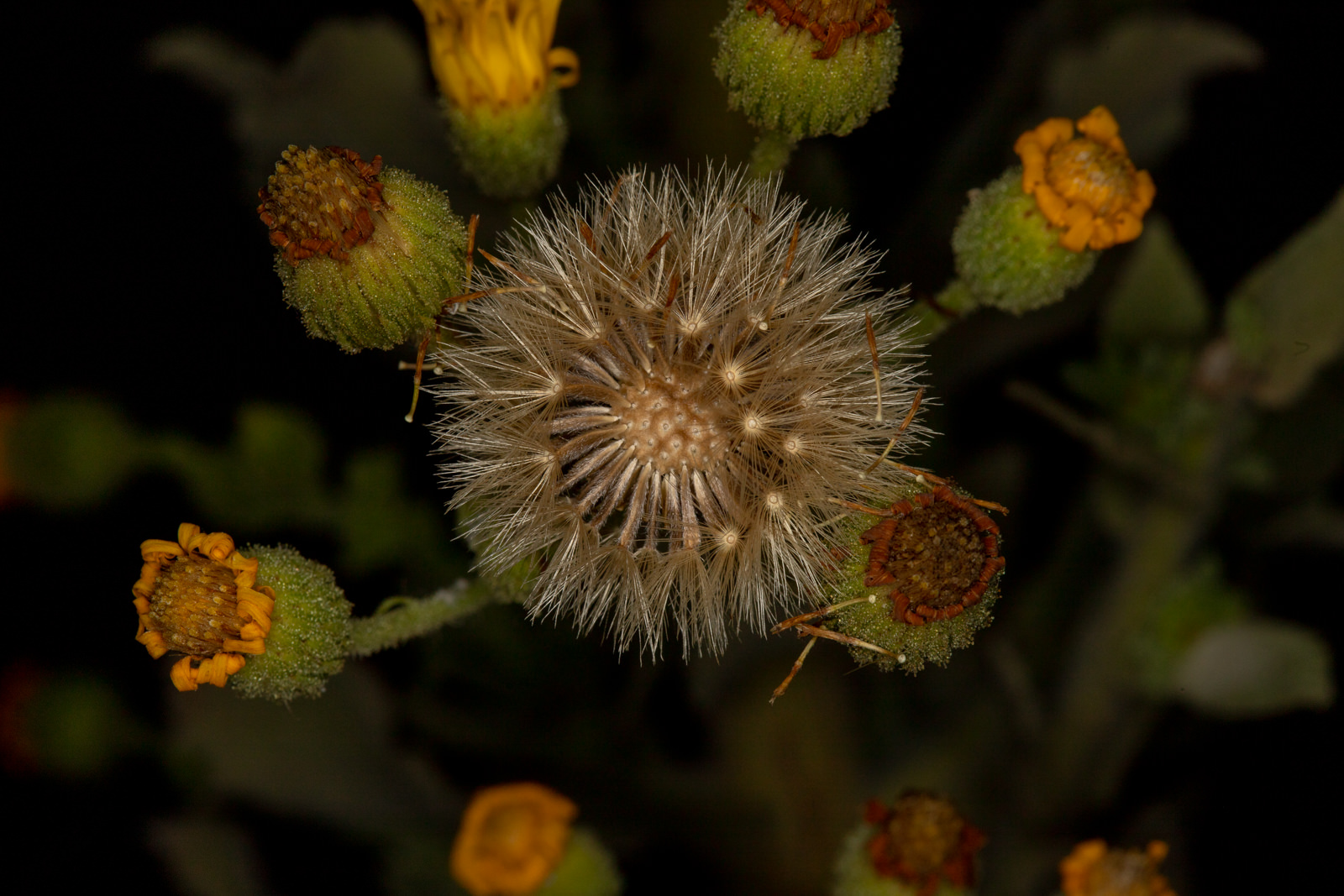 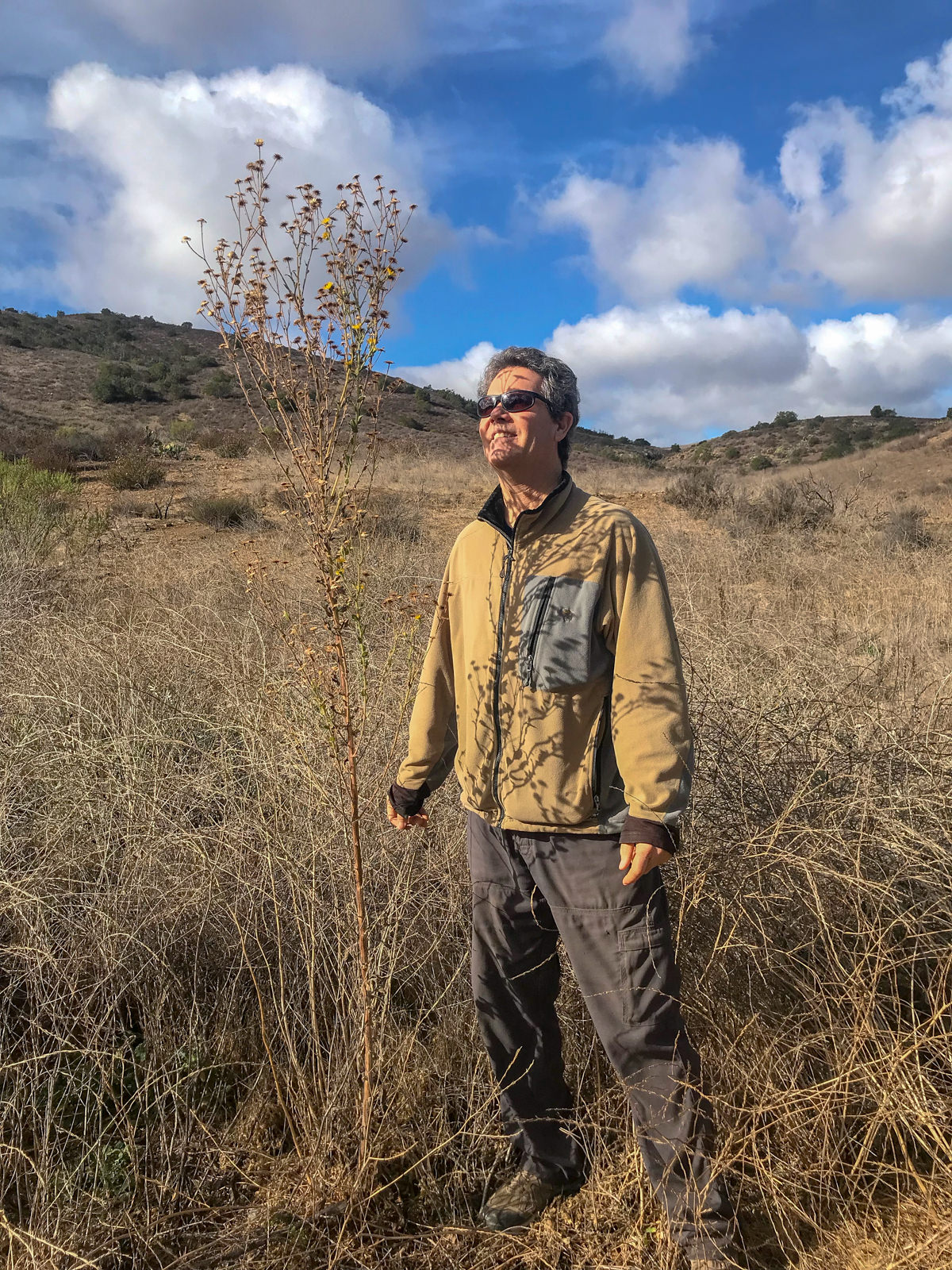 Telegraph Weed or more precisely Heterotheca grandiflora is a Native to our mountains as well other mountains down into Baja California. Utah and Nevada are recent hosts to this plant after introduction there. Not surprisingly, after it found its way into Australia and New Zealand, it is now considered invasive as it spreads its way into new territory. You can often see this plant blooming throughout the year (Summer is when this plant blooms most profusely ) on bare and sandy disturbed soil at the edge of a road or trail.

This plant can be more than a meter and a half tall - commonly it is less than a meter in height. What drew my attention were the scores of small yellow flower-heads (15-22 mm across) which grow at the tips of the branches. This plant is a member of the Sunflower family, so it has both ray flowers and disk flowers rather than petals. Blooming in the Summer makes this plant essential to the survival of pollinators and visitors that appreciate the delightful flowers in a season where there are fewer plants in bloom. From a basal rosette of leaves emerges a tall shoot with lots of fine hairs along with dense foliage. These fine hairs are adept capturing moisture from fog and providing some defense against bugs and insects. You can also see the resin glands in some of the images (they look like small dots on the stem and leaves). These glands are specialized trichomes (hairs) that produce and release secretions. This plant is one of the more ‘sticky’ natives, with a strong aroma - that some liken to creosote. Sticky, fragrant chemicals along with the hairs - deter herbivory, protecting the young leaves and late blooms. This plant disperses some of these chemicals into the surrounding soil to inhibit the growth of other seedlings (the proper term for this is allelopathic chemicals). Leaves alternate on stems.

Labeling this plant as a weed seems odd since it is native and grows in terrain unsuitable for many other natives. The grandiflora part of its scientific name seems misplaced as well. The flowers are numerous and not what most would consider large. Flowers are in produced in abundance on this plant - that characteristic could have made for a better descriptor. Perhaps the weed designation was for the fact that this plant is smelly if you touch it, scratchy when touched (after it has dried out) and its appearance can be unsightly after the flowers are gone.

This species reproduces only by seed. Hairs on these small seeds assist wind dispersal, allowing them to cover significant distances. Attachment to clothing and animals can assist the seeds to find new fertile ground.

Telegraph plant is considered to have medicinal properties which are not surprising for a plant with such a strong aroma. Chumash used the oils to repel fleas (Chumash Ethnobotany page 95). Antibacterial and antifungal properties have been associated with the chemicals produced by Heterotheca grandiflora.

Name Origin:Heterothe'ca: derived from the Greek heteros, "different," and theke, "ovary," from the unlike achenes of the ray and disk florets. The genus Heterotheca was published in 1817 by Alexandre Henri Gabriel de Cassini. (ref. genus Heterotheca)
Name Origin was found on calflora.net - a wonderful site for native plant information.