Plant of the Month - Wand Buckwheat 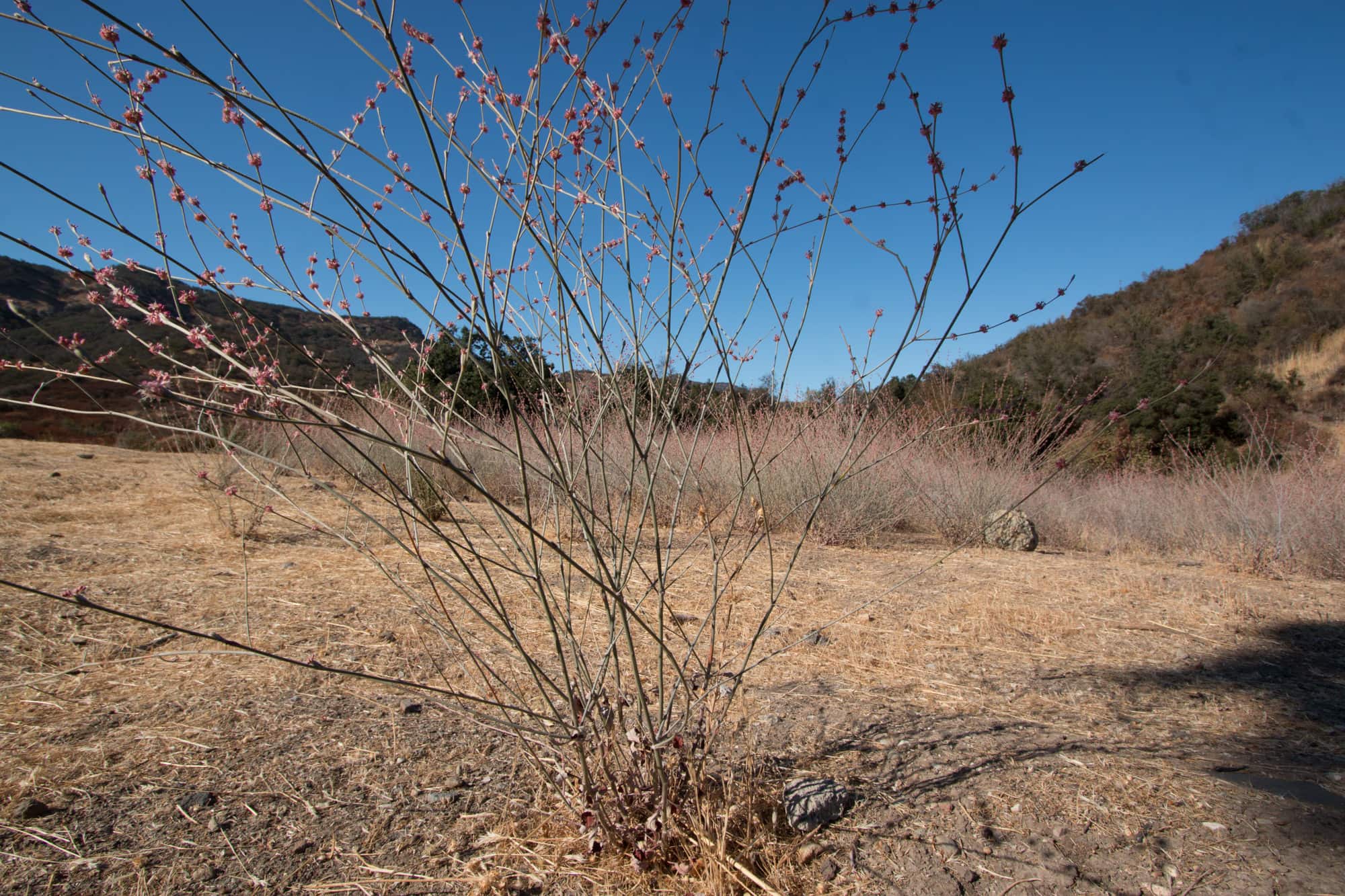 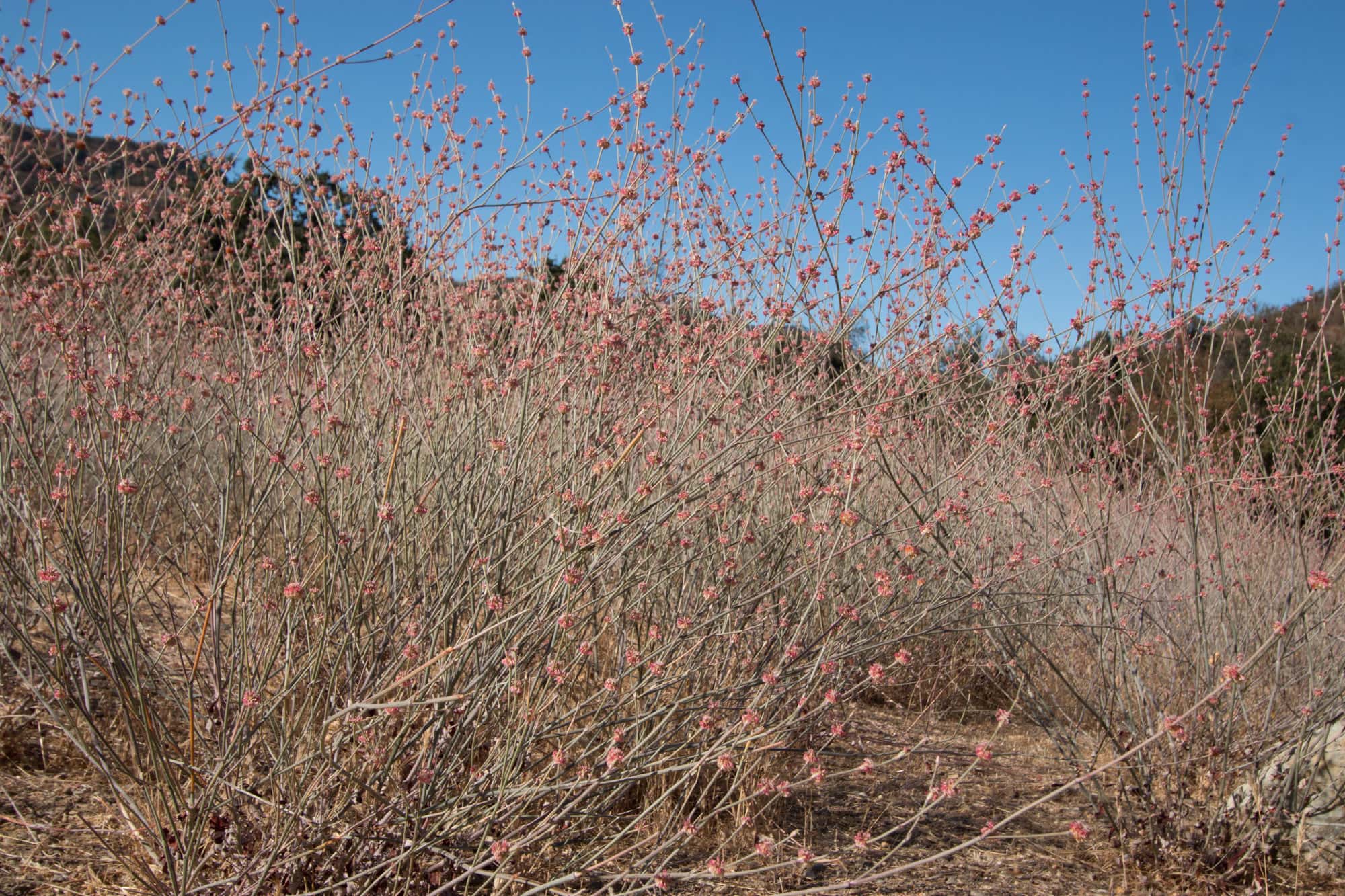 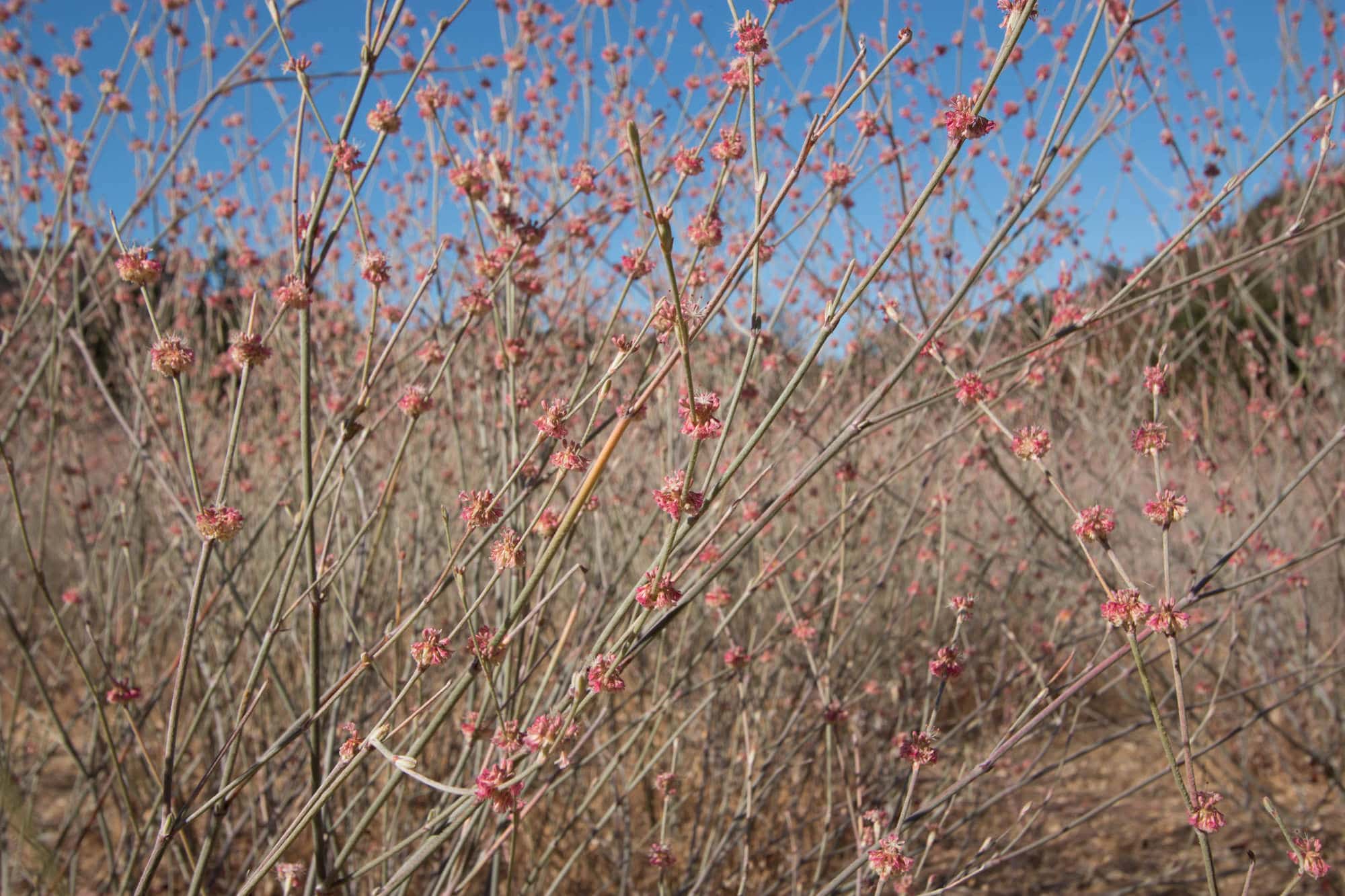 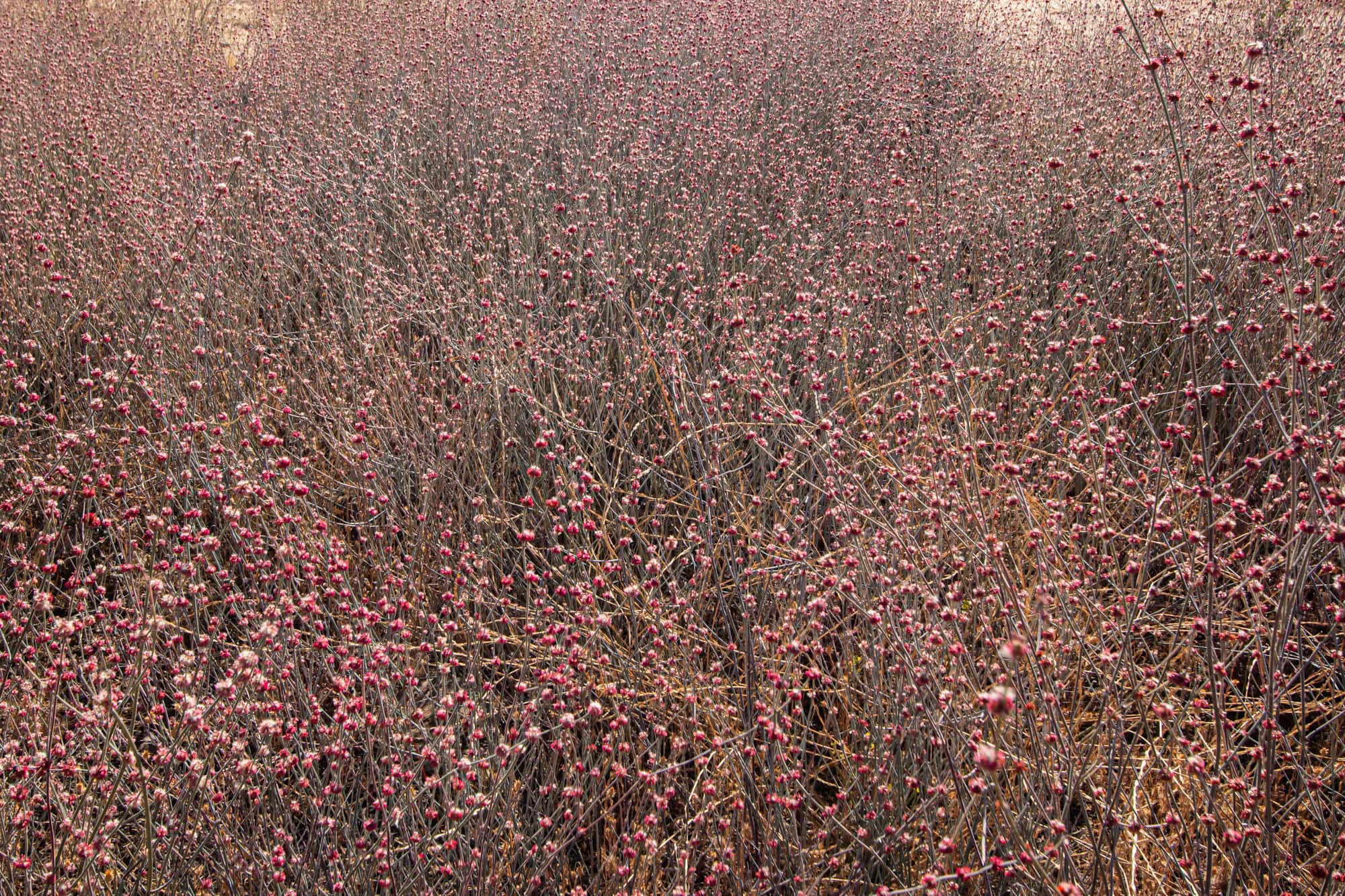 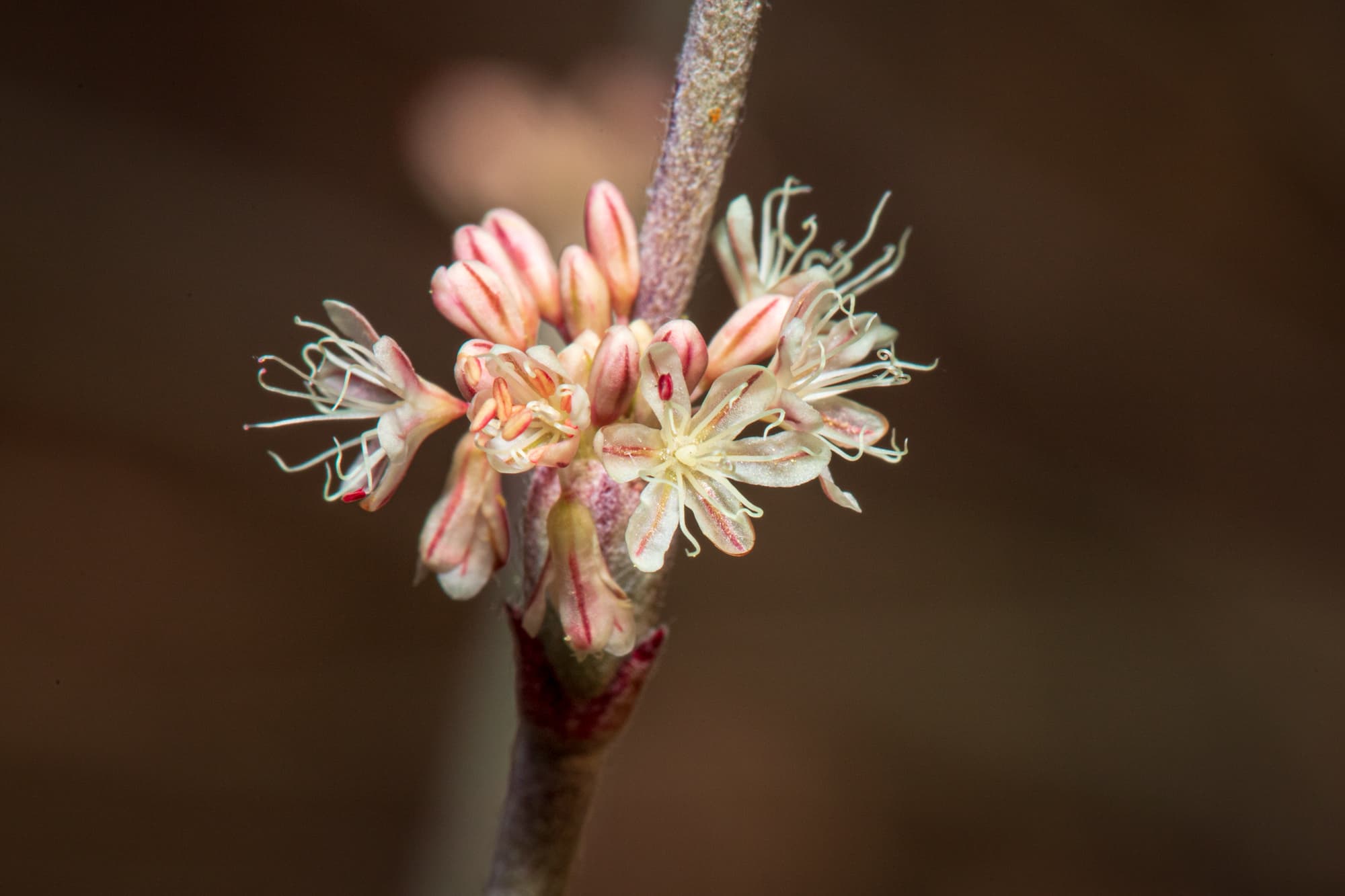 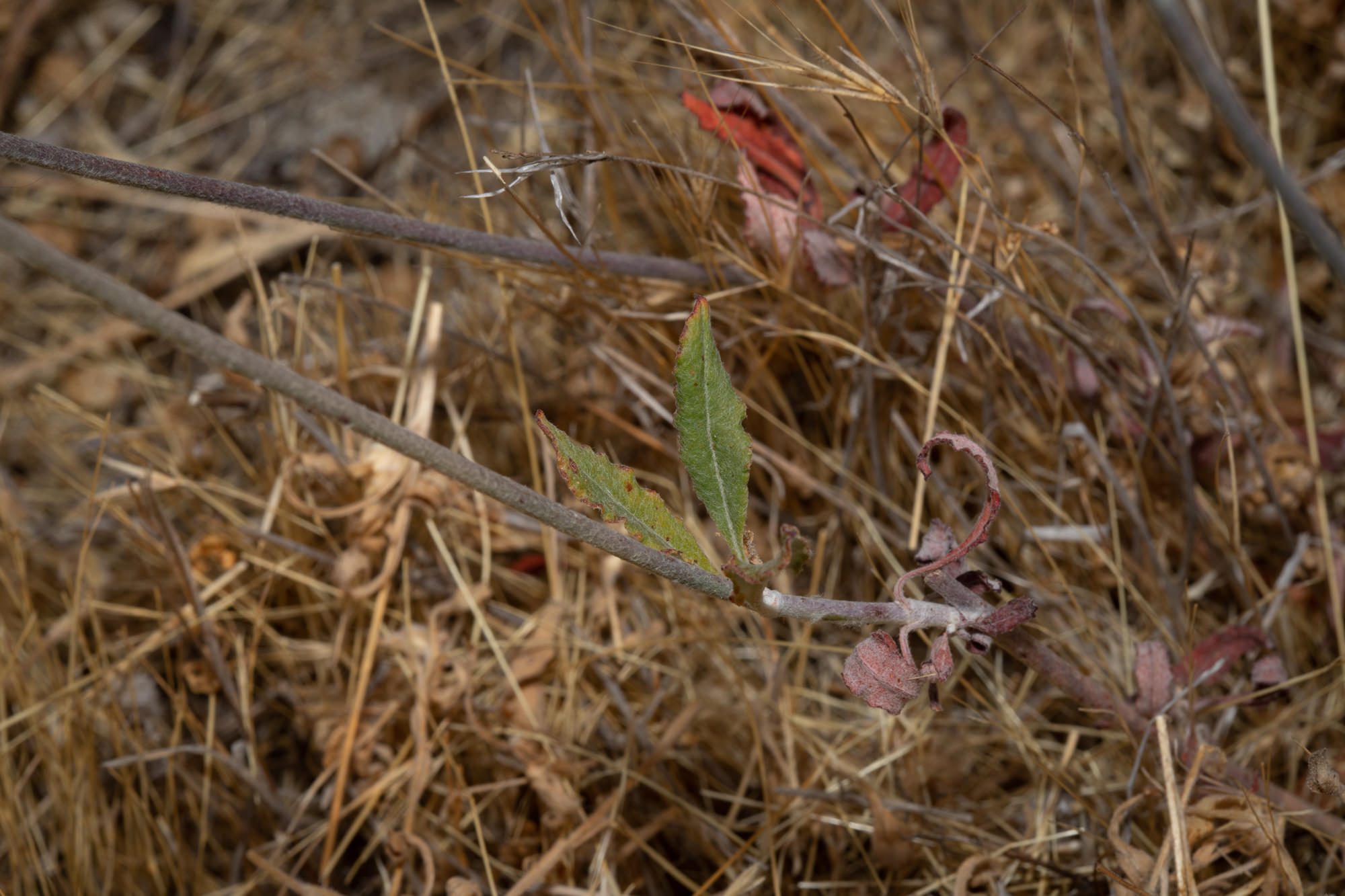 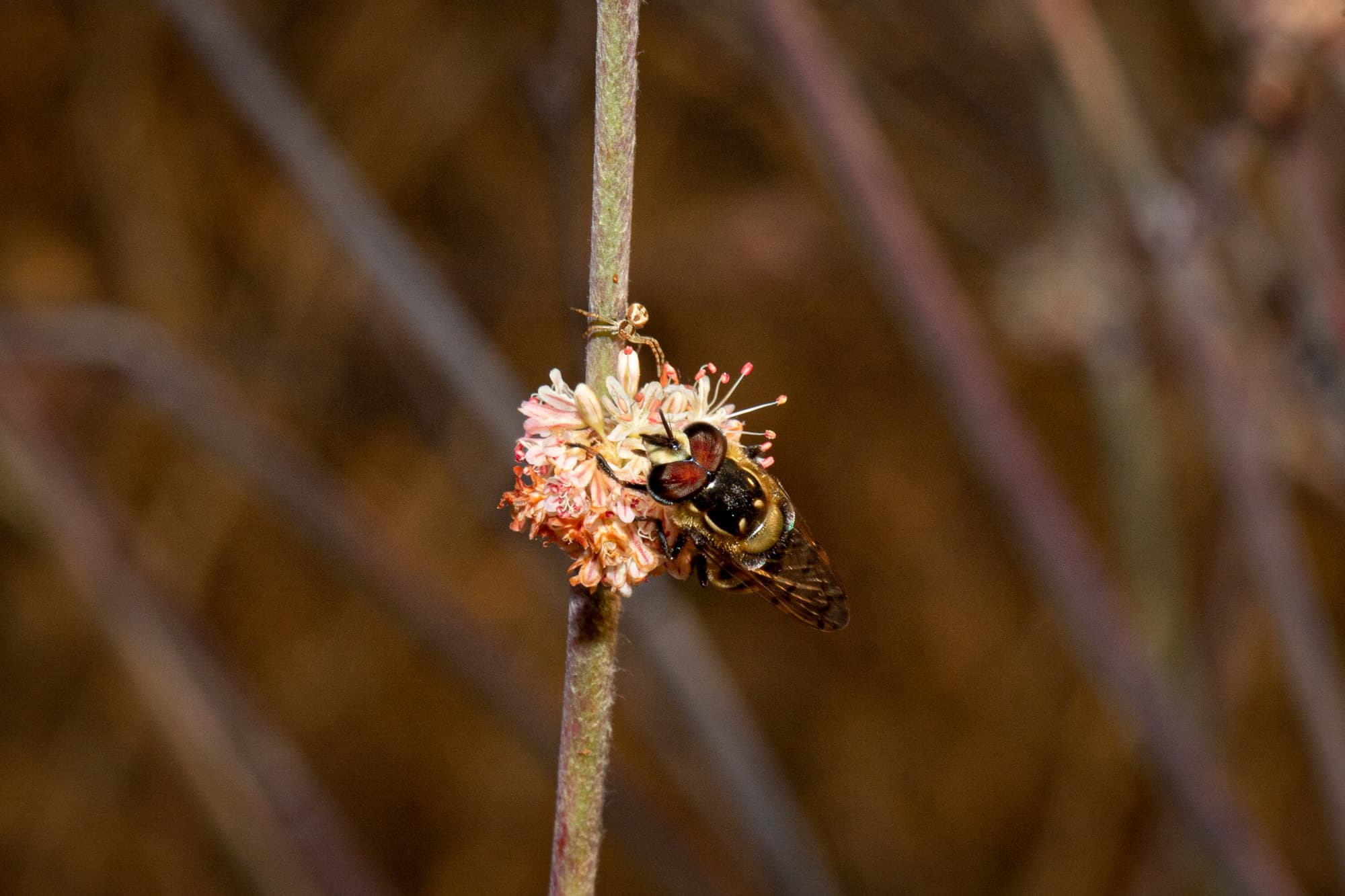 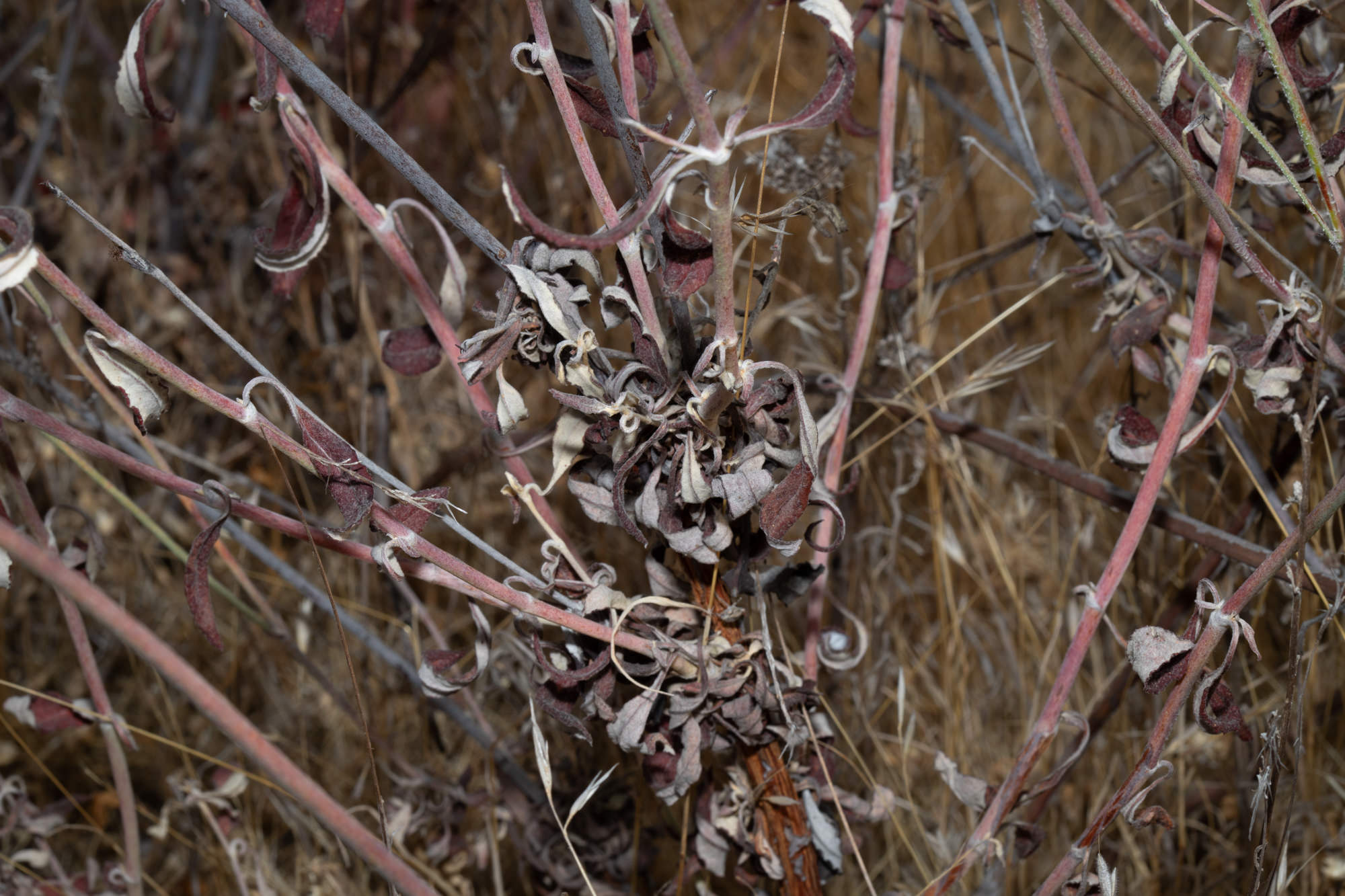 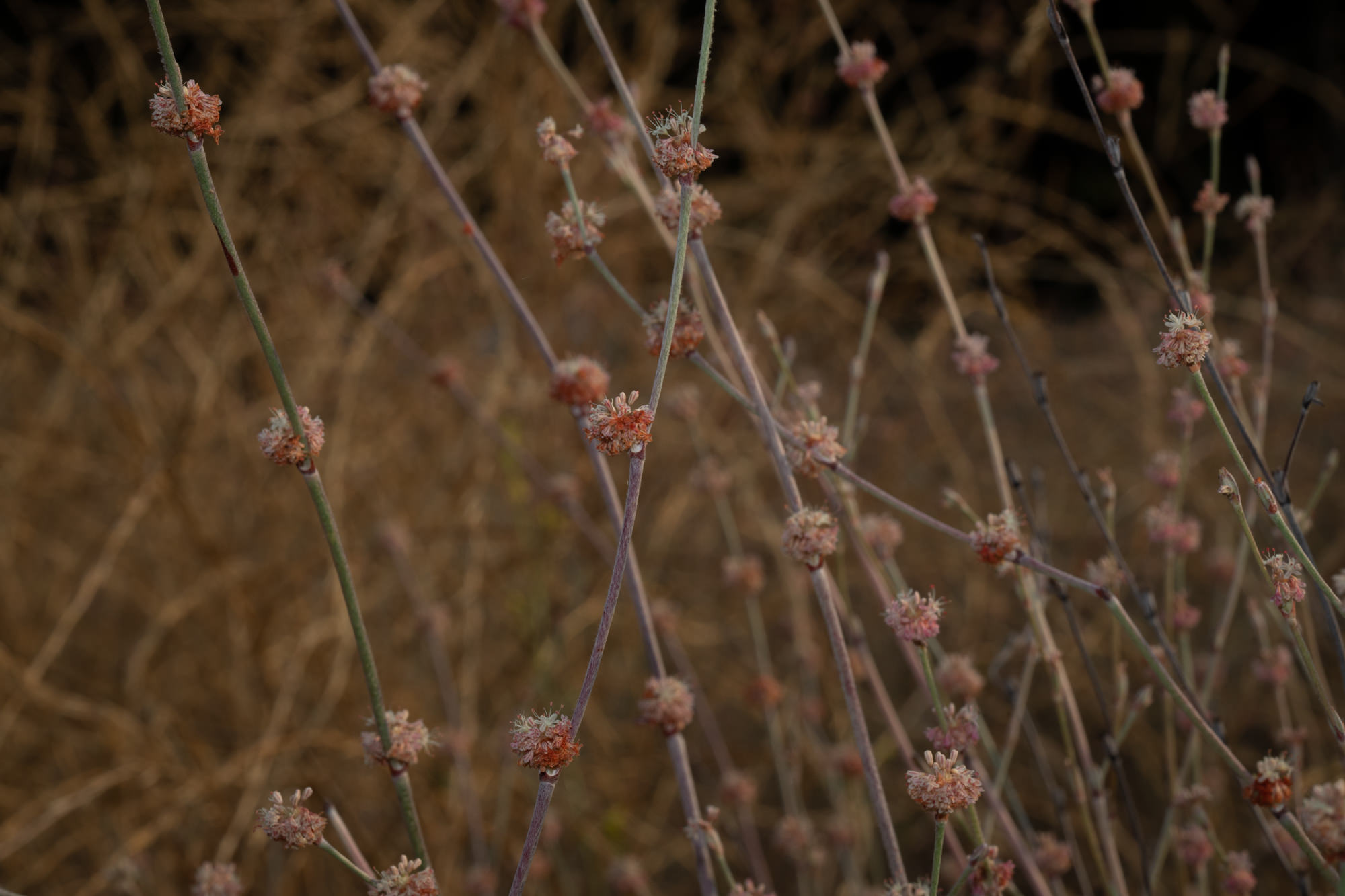 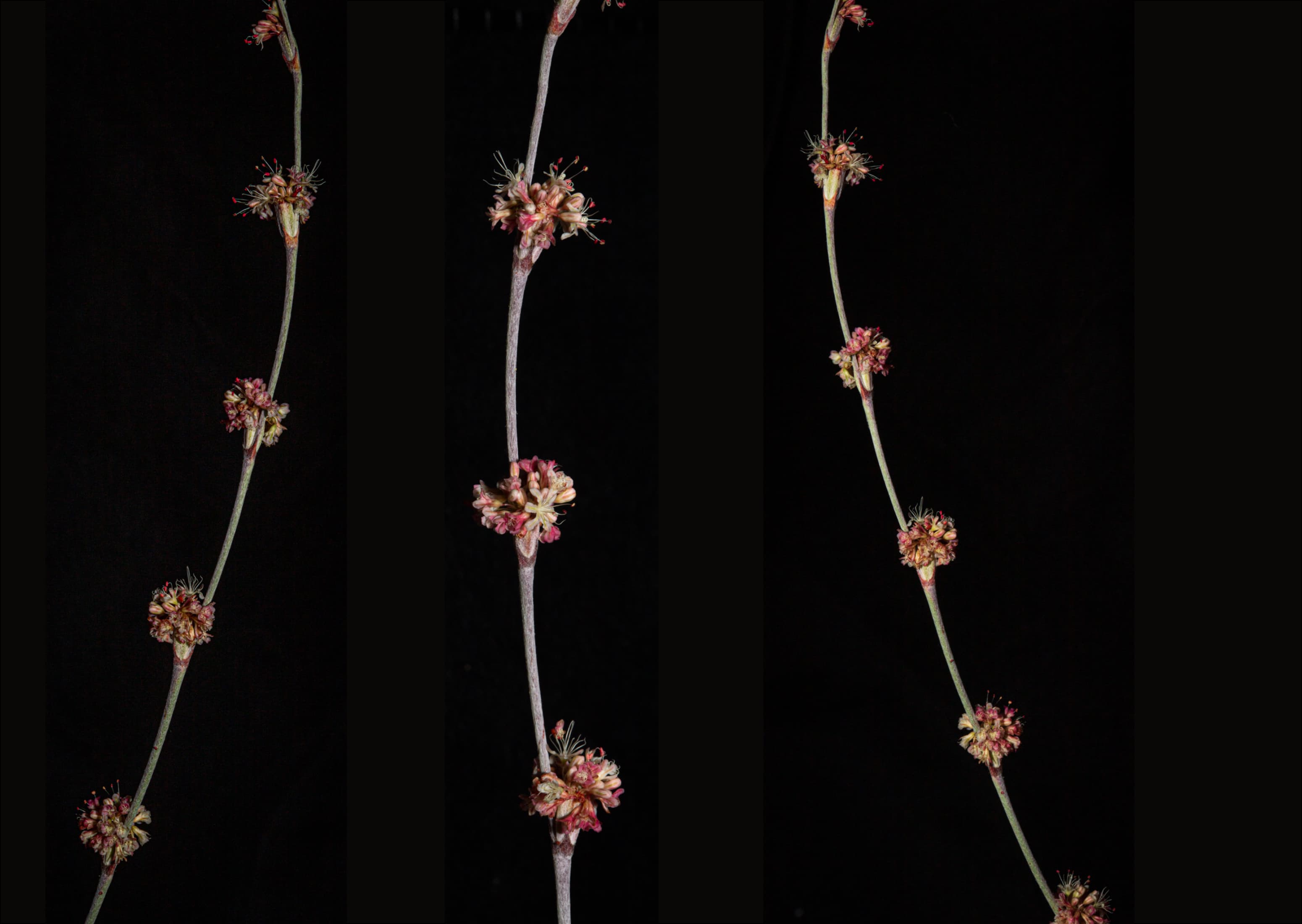 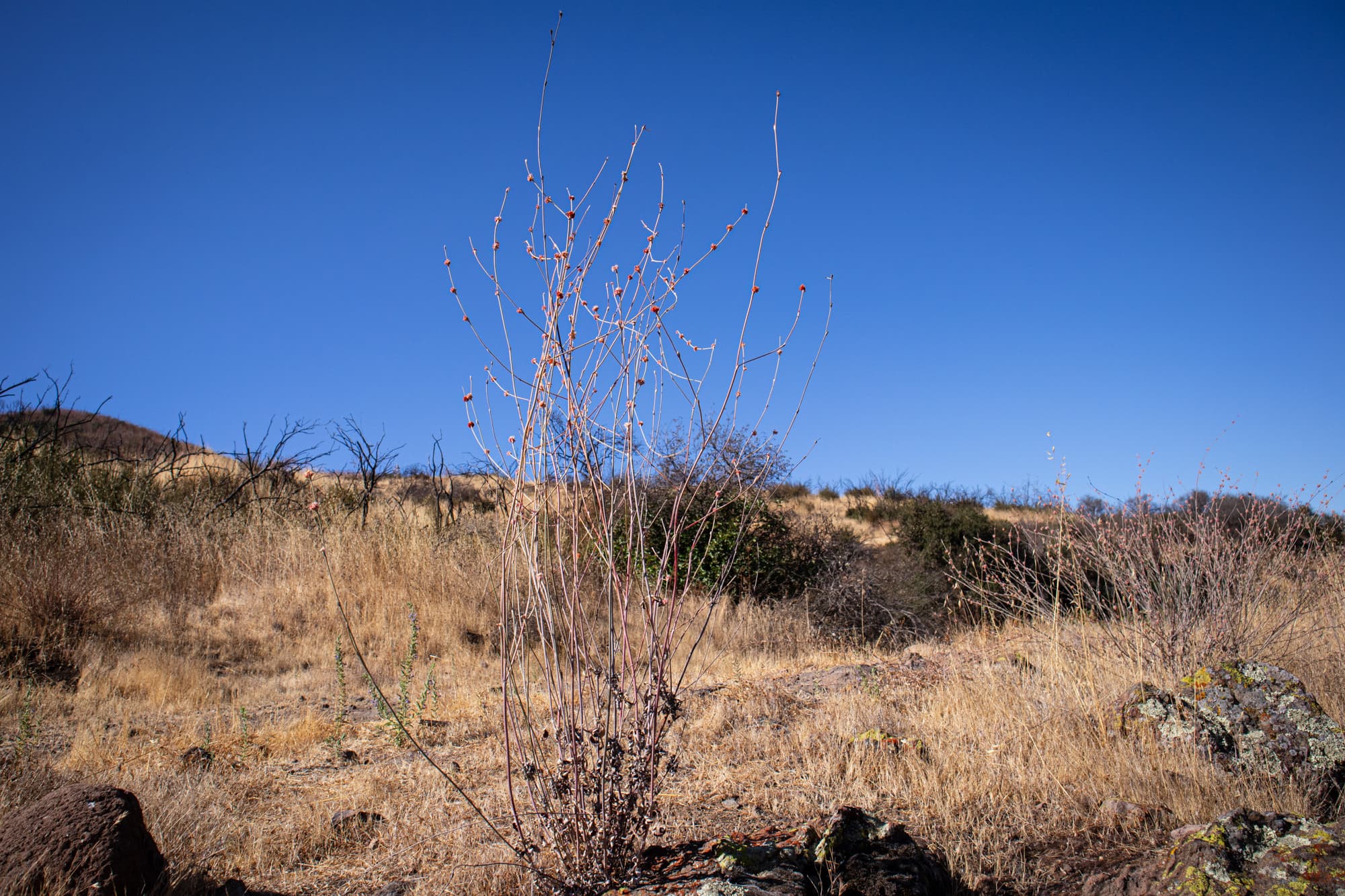 Wand buckwheat - Eriogonum elongatum is a California native perennial plant related to the more widely observed California buckwheat (E. fasciculatum) - a dominant species in coastal sage scrub. Wand buckwheat is easily overlooked - with similar appearing tiny flowers - your mind identifies the plant as buckwheat and moves on to the next task. In doing so we skip past the details that make this plant different from other buckwheats: few to many long, slender, wand-like stems configured with small clusters of flowers. What caught my eye the first time I took notice of this plant was how the sun shone through the flowers. Without leaves diffusing the light, each flower glowed and the cumulative effect of so many tiny glowing flowers caused me to pause in amazement. Blooming, August through November, this plant is another summer flowering plant that provides nourishment to our pollinators. Wand buckwheat is found from Monterrey Bay south into Baja California and prefers dry, rocky or sandy places: coastal sage scrub, chaparral and disturbed areas below 4000 feet (1250 m).

The stems of Wand buckwheat can grow to five feet (1.6 m) in height. The plant usually grows vertical in the middle but mostly spreads and leans sideways. A deep taproot provides support and nourishment. Thin, greenish, sparsely branched stems often appear to be gray - likely because long hairs adorn them. The plant dies back to the ground after flowering. By the time the flowers open the leaves (confined to the lower portion of the plant ) are often dead or fallen.

The flower heads contain numerous flowers having six tepals (no petals), nine stamens and has both male and female plants. Flowers are small enough to require a hand lens to see the details. With a bit of magnification you can see that he anthers are a deep rose and the pollen is a shade of white. The single pistil has three white styles with minute pink stigmas. Harder to observe is that the ovary is superior and oval shaped. Within an inflorescence, flowers are often of different ages, some still buds, some blooming and others developing fruit.

Most of us think of a plant’s leaves as the sole location of photosynthesis. Wand buckwheat stems contain chlorophyll. This is common in plants adapted to desert and Mediterranean climates where water-use efficiency is essential. Other plants that have the same ability are Deerweed, Scale Broom and Peak Rush Rose among others.

Eriogonum – from the Greek erion, "wool," and gonu, "joint or knee," in reference to the hairy or woolly joints of some of the species of the genus. Michaux's description of the plant in his publication of 1803 was based on a single species because that was all he had. David Hollombe has interpreted his explanation of the name as meaning "both woolly and geniculate, rather than plant with woolly joints."
elongatum – elongated, lengthened.