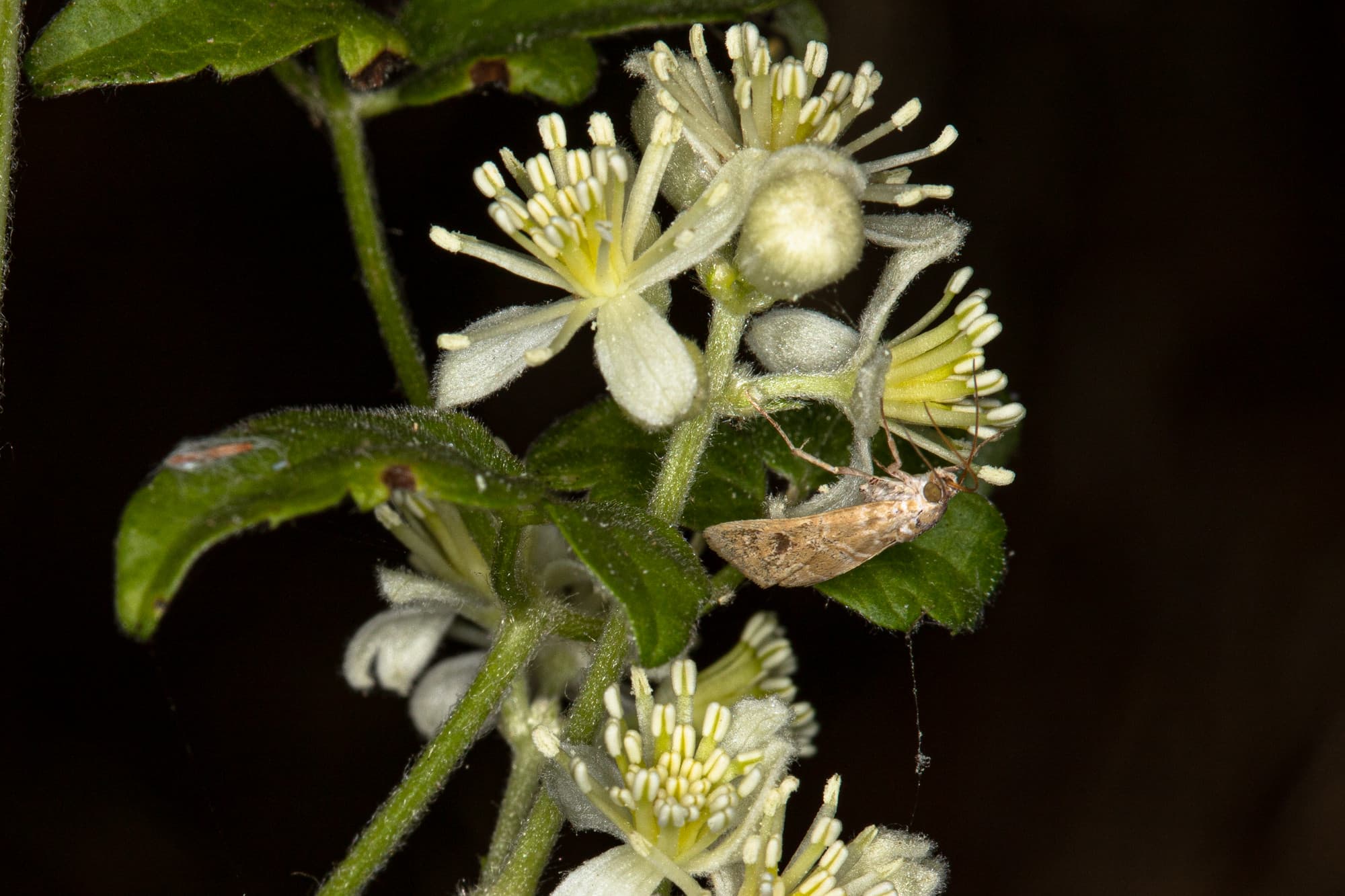 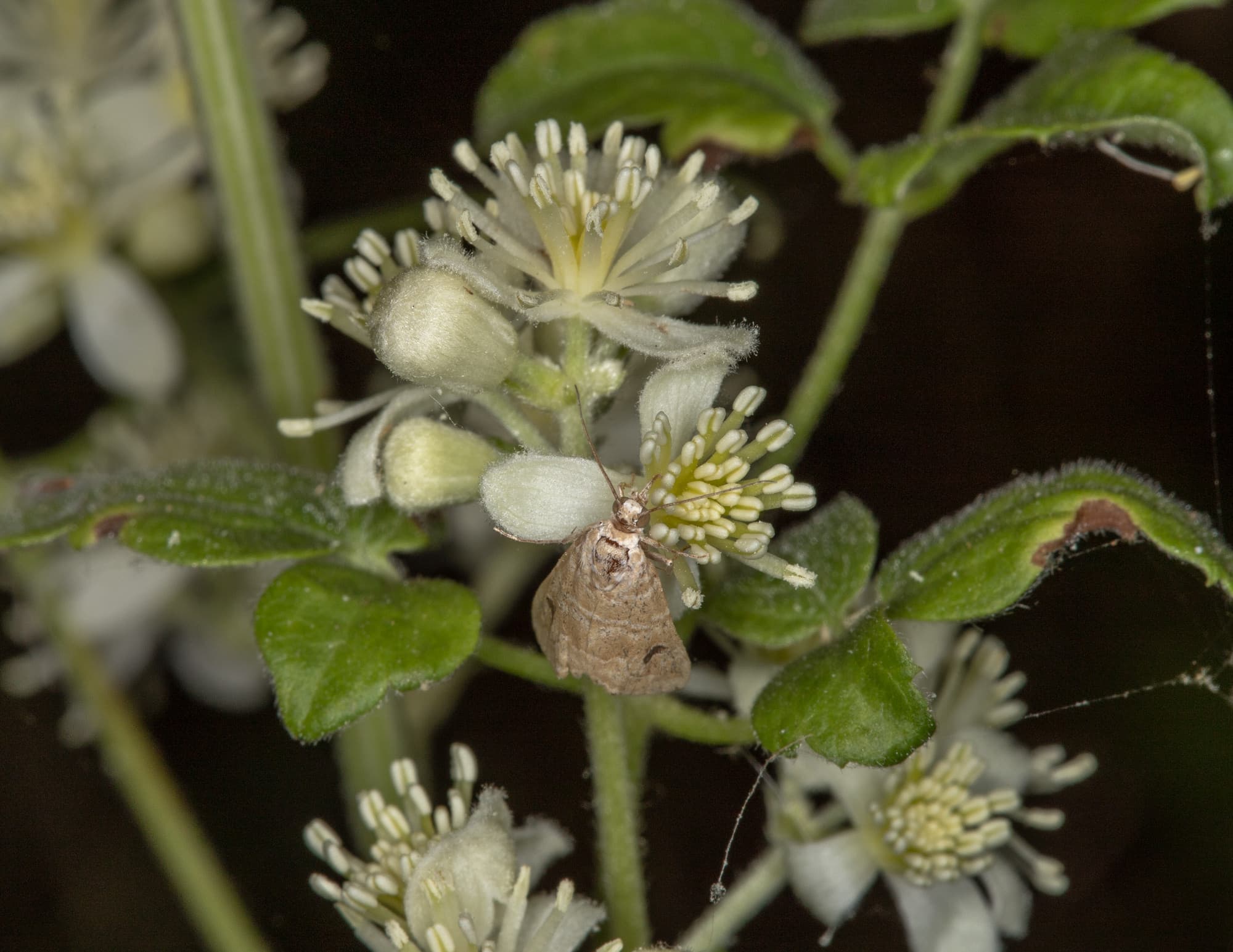 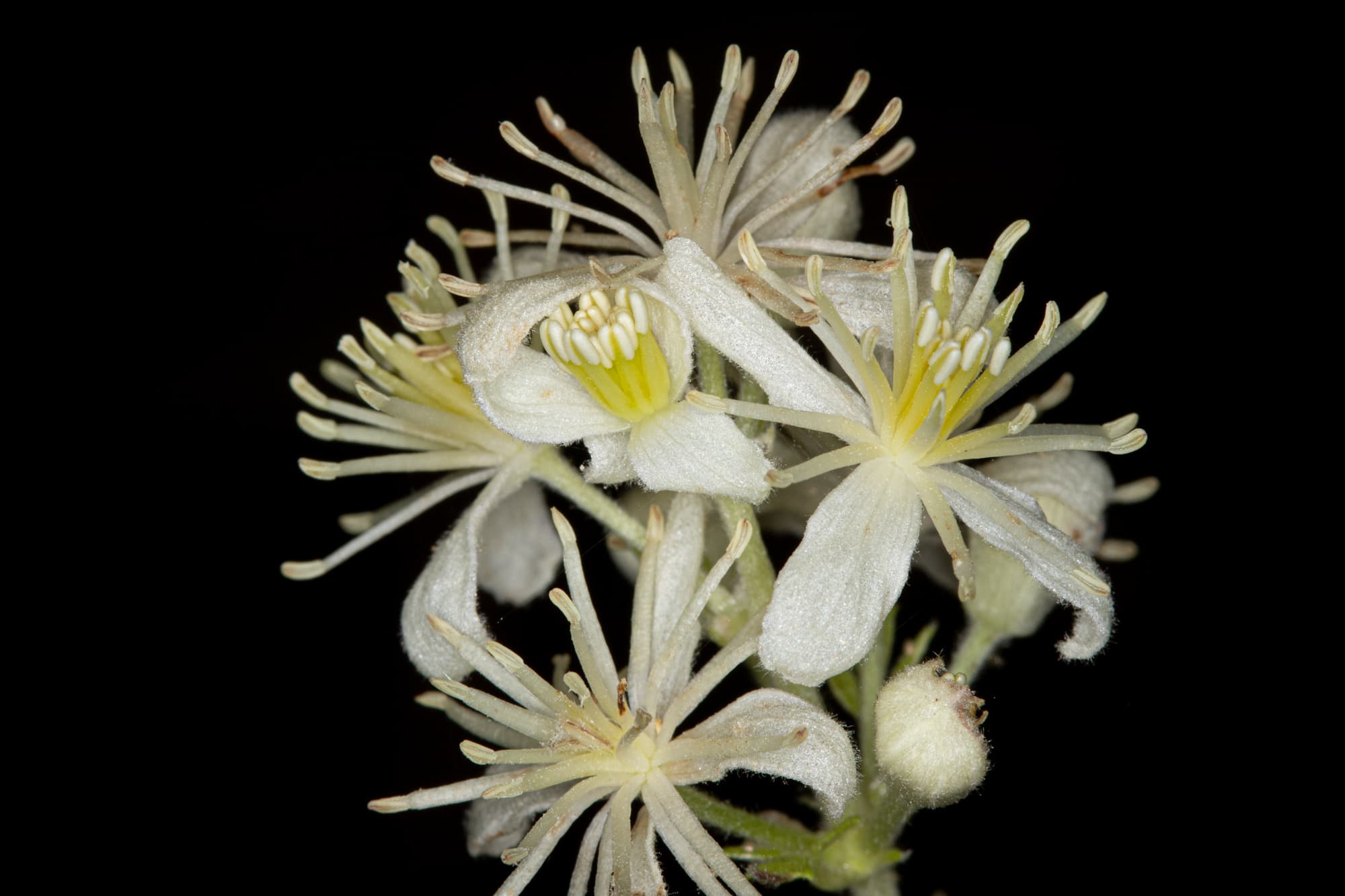 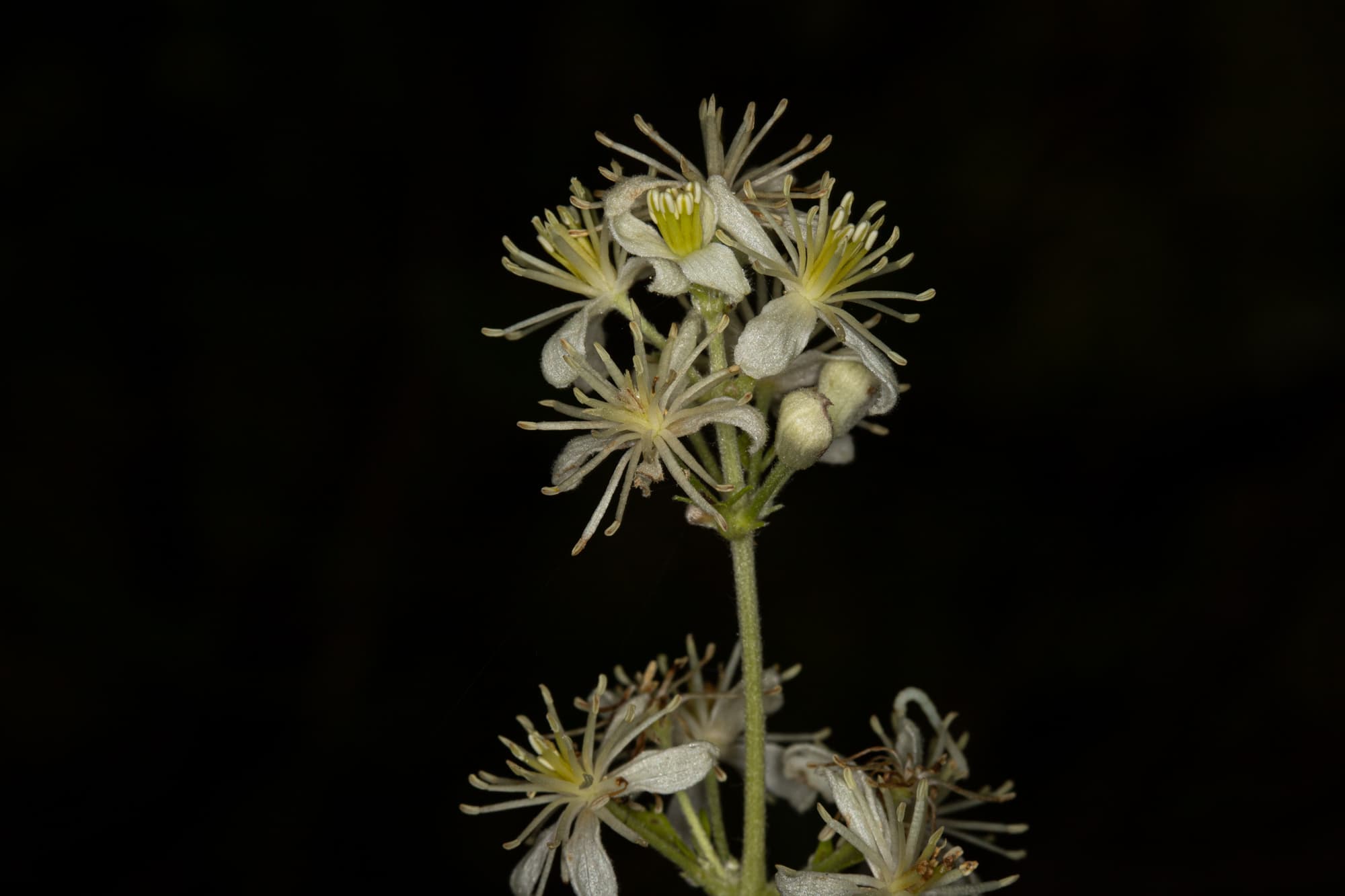 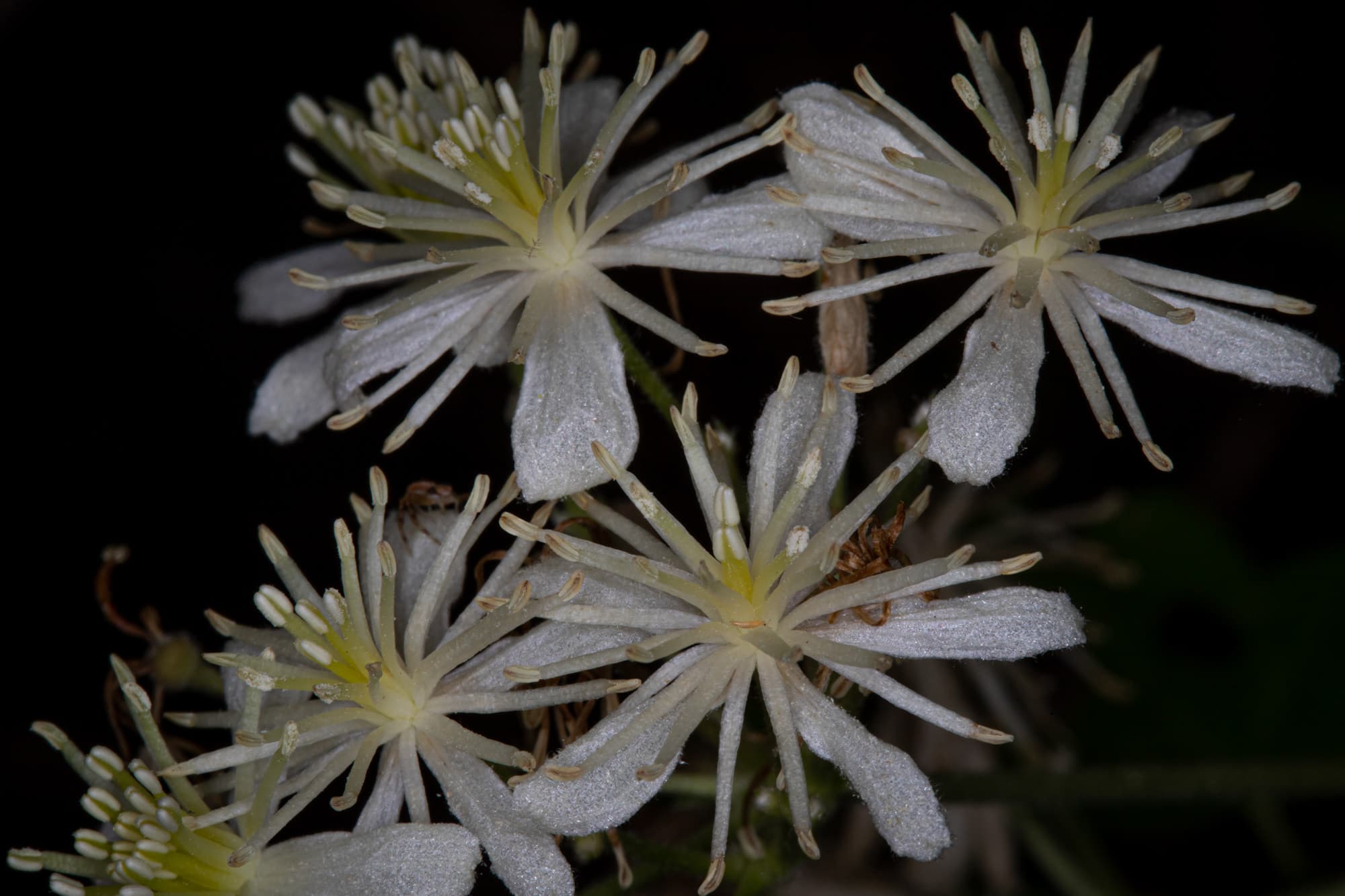 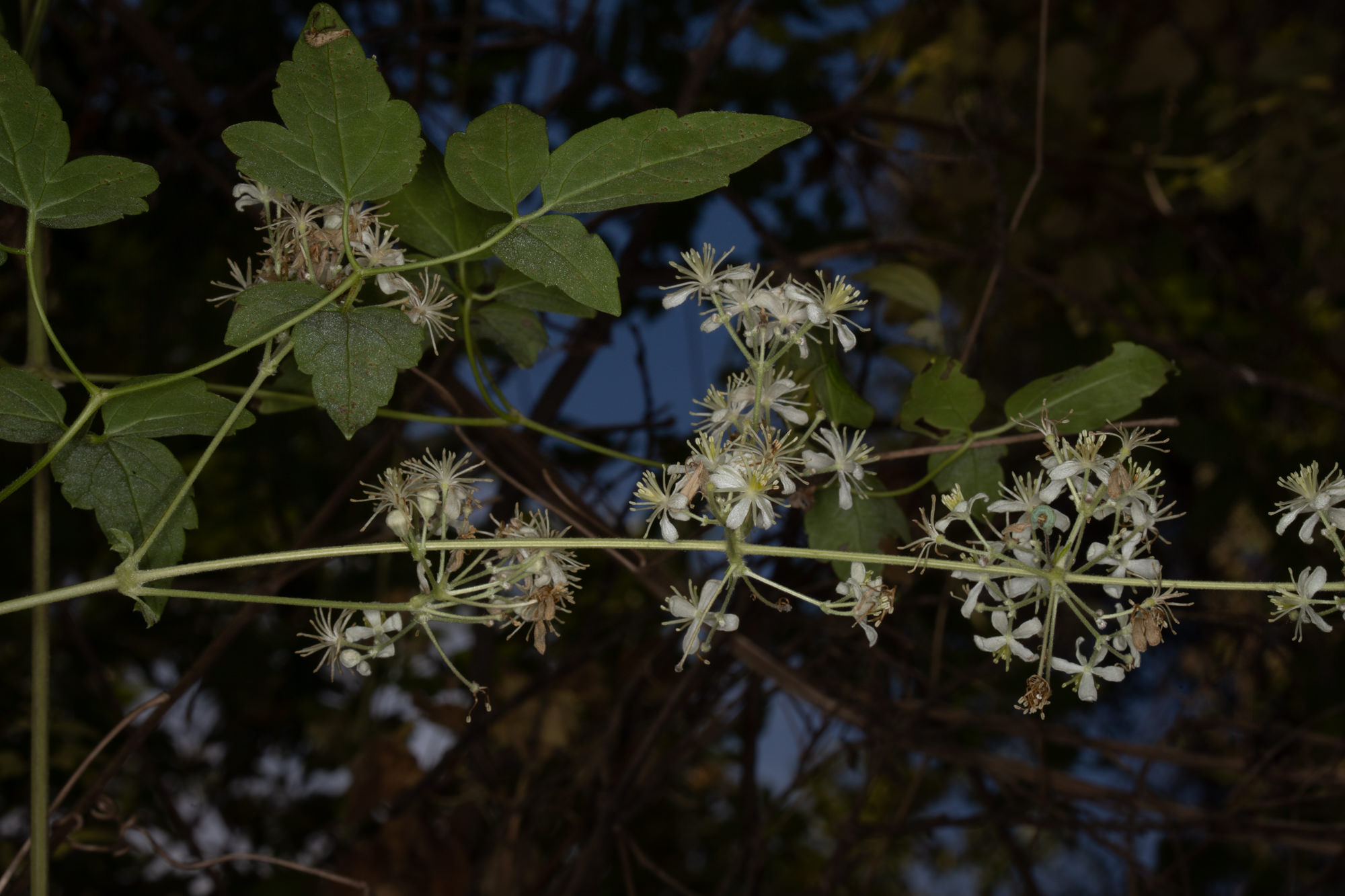 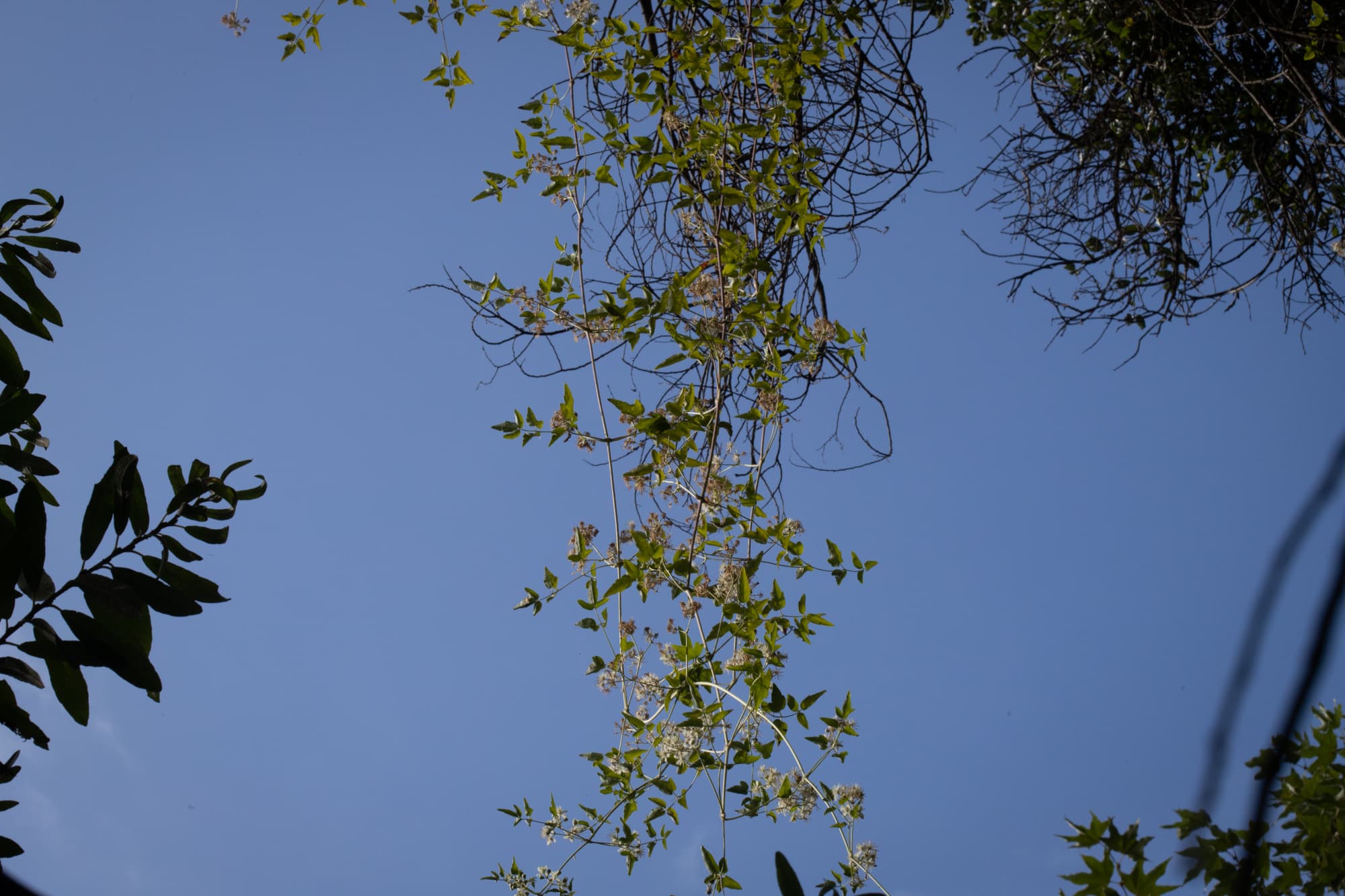 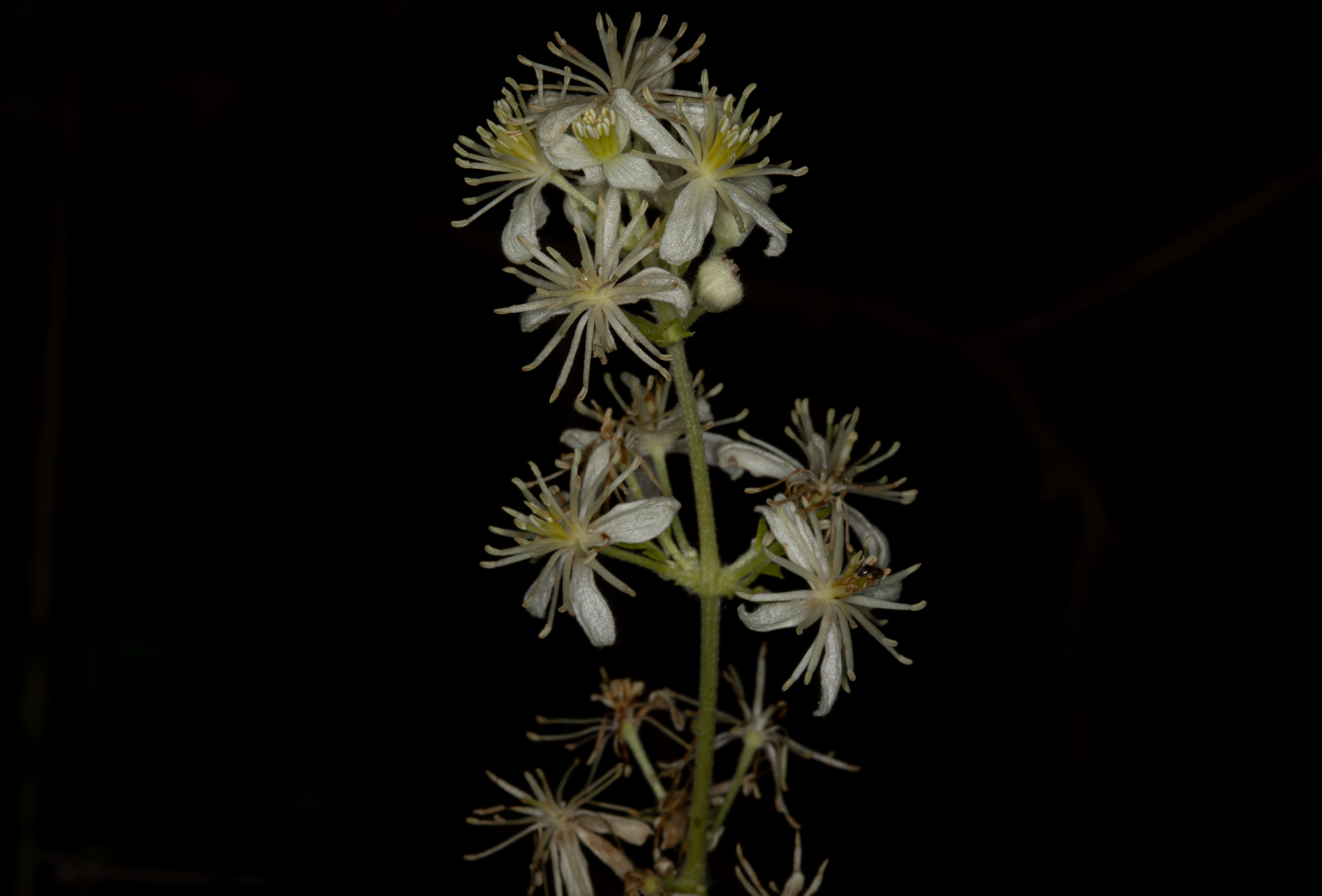 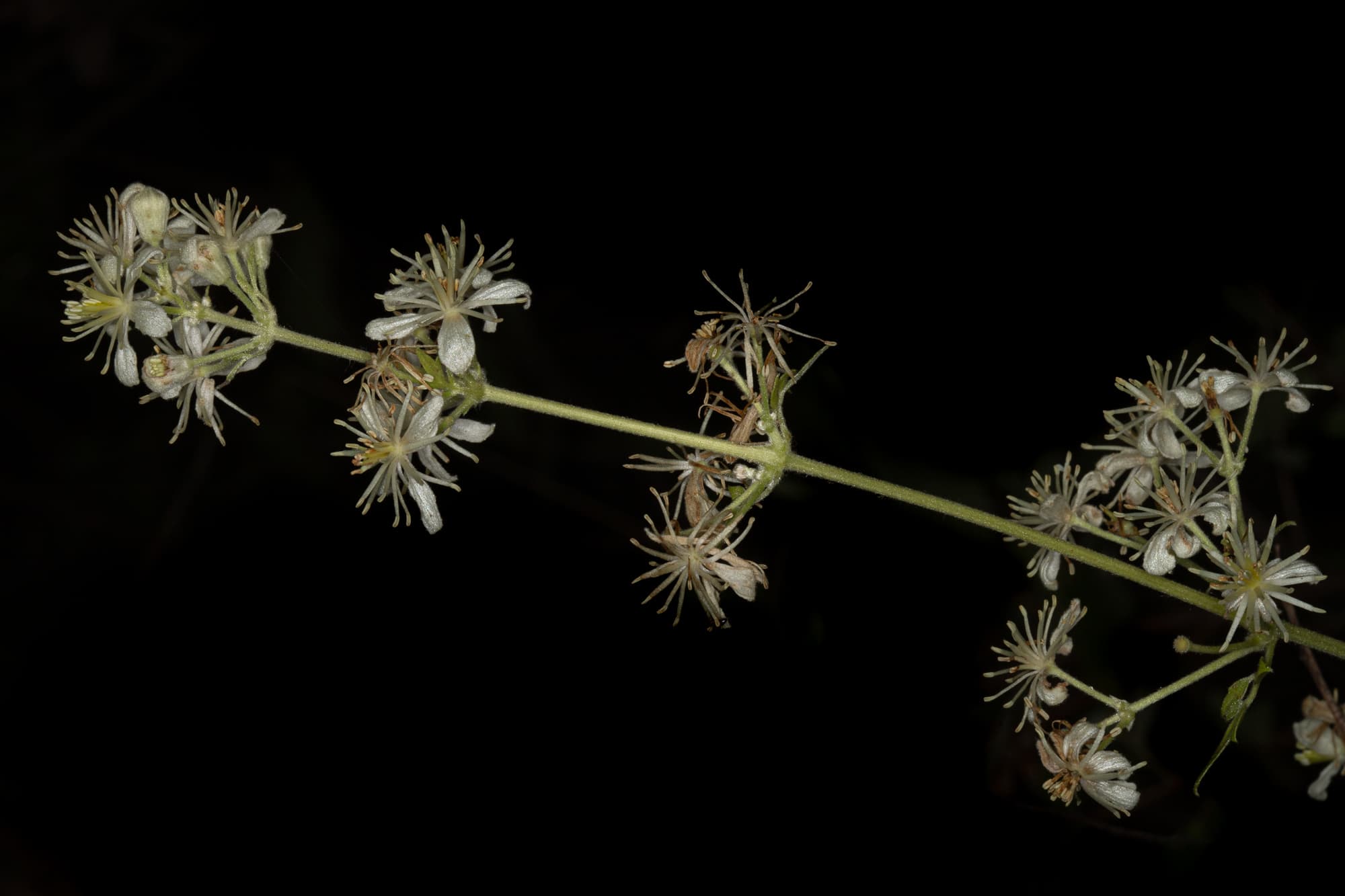 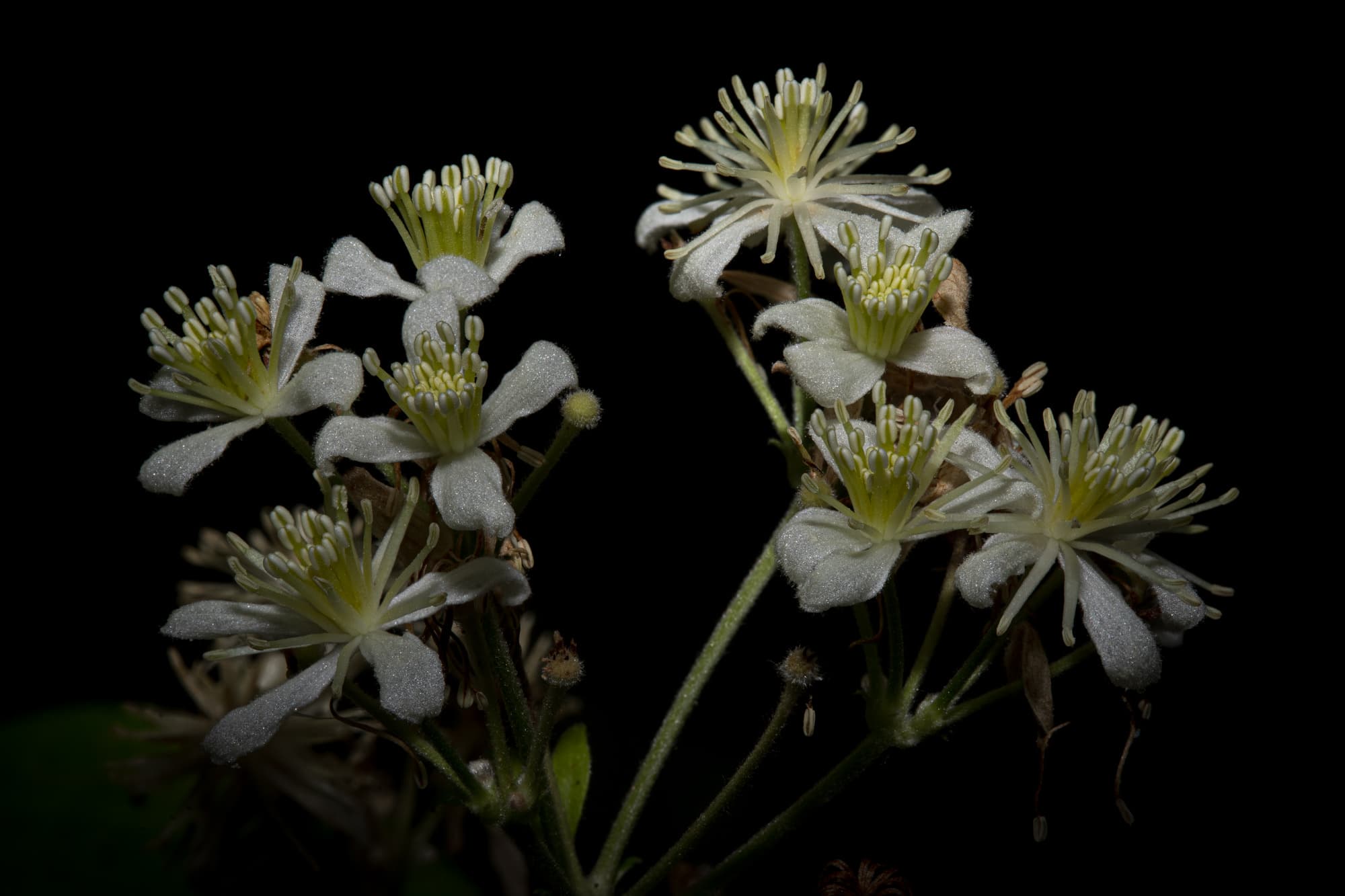 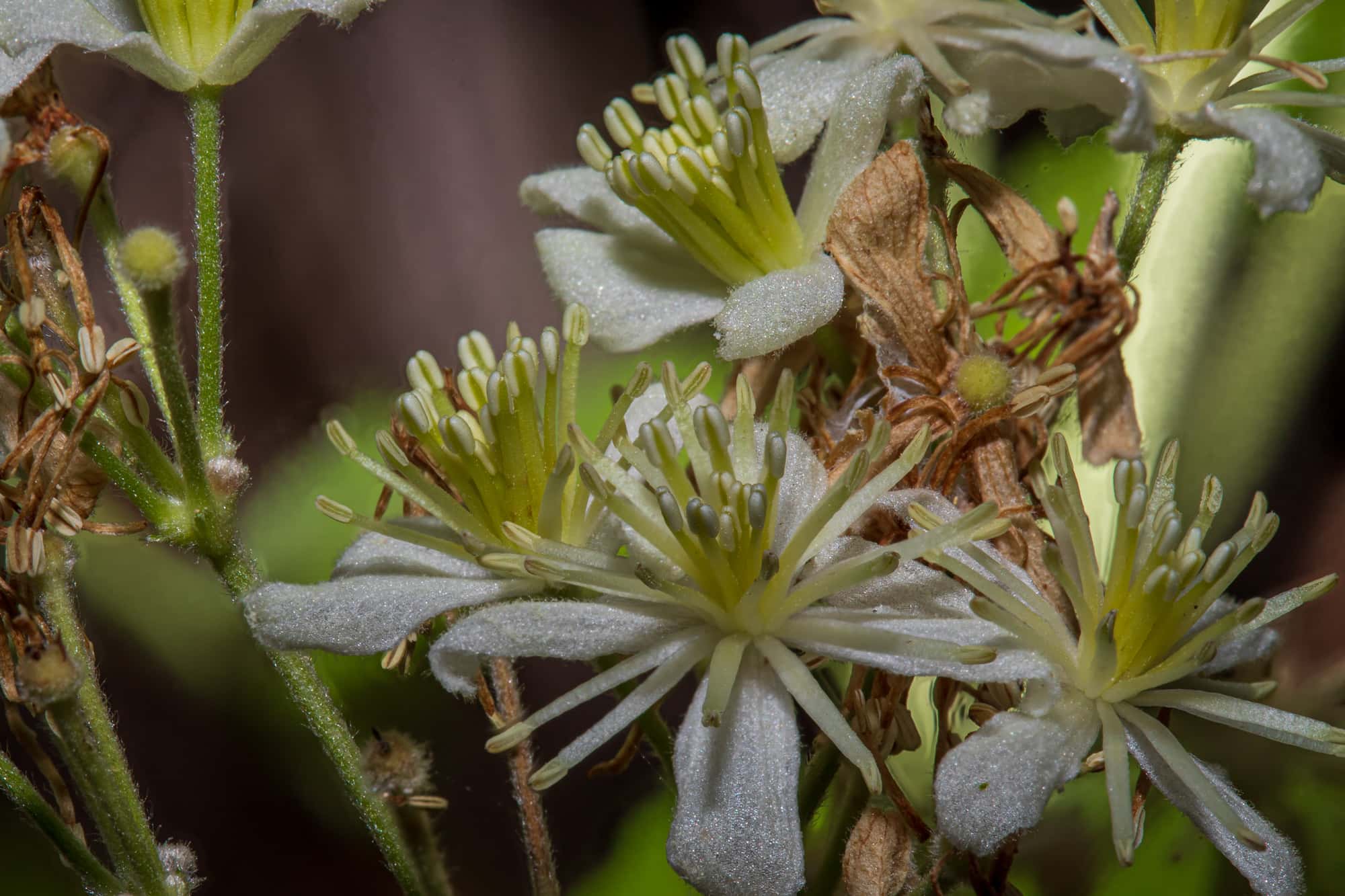 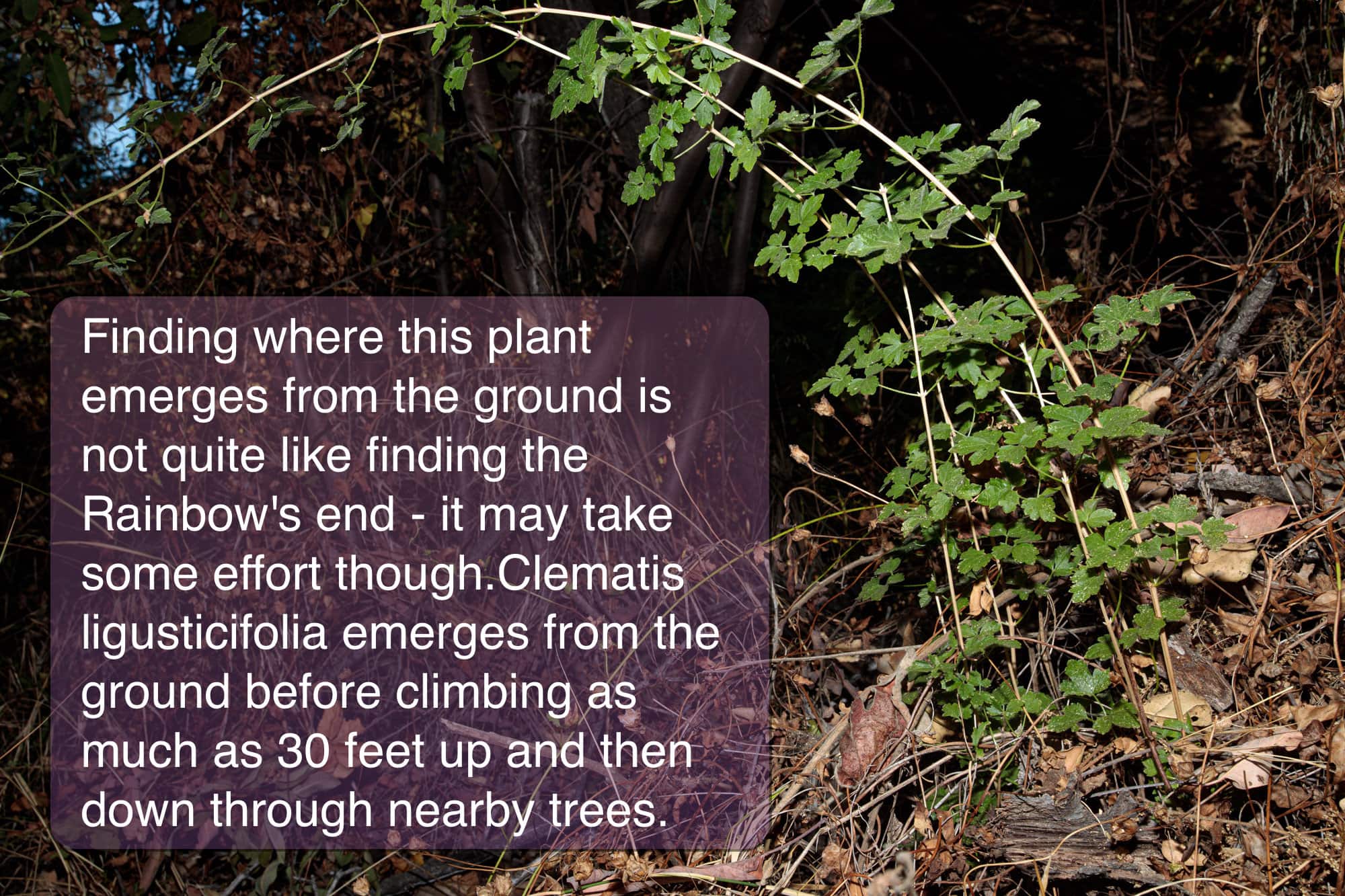 In the Santa Monica Mountains there are two species of plants within the Clematis genus that share the common name Virgin's Bower. These two species may hybridize together but do bloom at differing times. Clematis lasiantha, usually called Pipestem Clematis and sometimes Chaparral Virgin's Bower, blooms earlier in the spring (February to May), has fewer but larger and more showy flowers, leaves made up of 3-5 leaflets, shorter vines (10-15 feet (4.57 m)), and can tolerate drier conditions than its counterpart. It is found only within California, whereas Clematis ligusticifolia can be found across most of the western US. Sometimes called Western Virgin's Bower, Old-man's Beard, Pepper Vine or Yerba de Chiva, Clematis ligusticifolia blooms from April to August. Its flowers are smaller — about a half-inch diameter compared with the Clematis lasiantha, and it normally has a few more leaflets. Its growth habit tends toward longer vines and as such it is more of a climber, reaching up to 60 feet (18.29 m) in length as it scrambles over shrubs and trees.

My first experience (August -some years in the past) with this plant occurred on an overgrown trail in Point Mugu State Park with lots of Poison Oak. This vine with leaves of three drops into view. Closer examination revealed the leaves had only a passing similarity to Poison Oak. As I looked up to see where the vine was going, there were delicate cream colored or white flowers that looked like the Virgins Bower we had seen in the spring. This made identifying the flower much easier. One of the joys of repeatedly hiking the same trails is returning year after year to see the same plants in different phases of their existence. From bud to flower to seed-head takes time and with each visit familiarity with the species builds. Every summer, I look for this plant to bloom like it has for more years than civilization has been around.

The numerous stamens and pistils of the flower are a clue to the family they are part of: Ranunculaceae or buttercup may not have been what you were thinking — Larkspurs, and California Buttercup look nothing like this flower. However, they share common traits such as numerous stamens and pistils. Petals are absent on this plant — in their place are 3-5 sepals. The images on this page reveal that some plants are perfect (male and female productive parts present) and some are male only. As the season progresses, the flowers' pistils produce dry fruits or achenes that form tails and develop into something that might appear in a Doctor Suess book. The tufted seeds reminded some of “barba de chivo” or Goats beard.

Native people used this plants in a variety of ways for medicinal purposes: Treating ringworm, rashes, colds, sore throats and chest pain. The plant had other uses: seed heads as tinder or insulation and placing the crushed roots in the nostrils of tired horses to get them to travel a bit farther. One of the common name refers to thew pepper like taste when chewed.

Clematis: in Greek means "long, lithe branches" and is an ancient name for some climbing plant. The genus Clematis was published in 1753 by Carl Linnaeus. (ref. genus Clematis)
ligusticifolia: from the Latin meaning "with leaves like those of Ligusticum (Lovage)." (ref. Clematis ligusticifolia) Ligusticum: from the Greek ligustikos, "Ligurian, pertaining to Liguria, Italy."
www.calflora.net is the source of this info.