Plant of the Month - White Sage 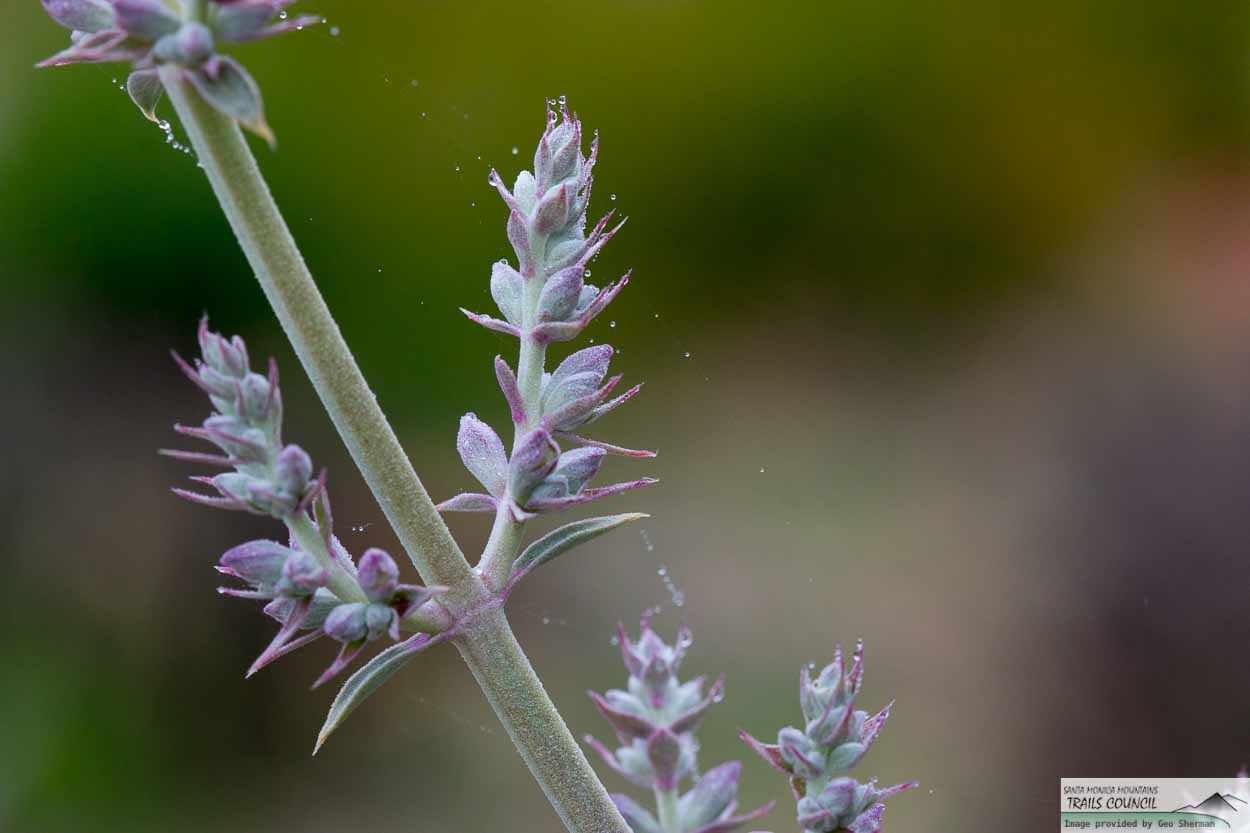 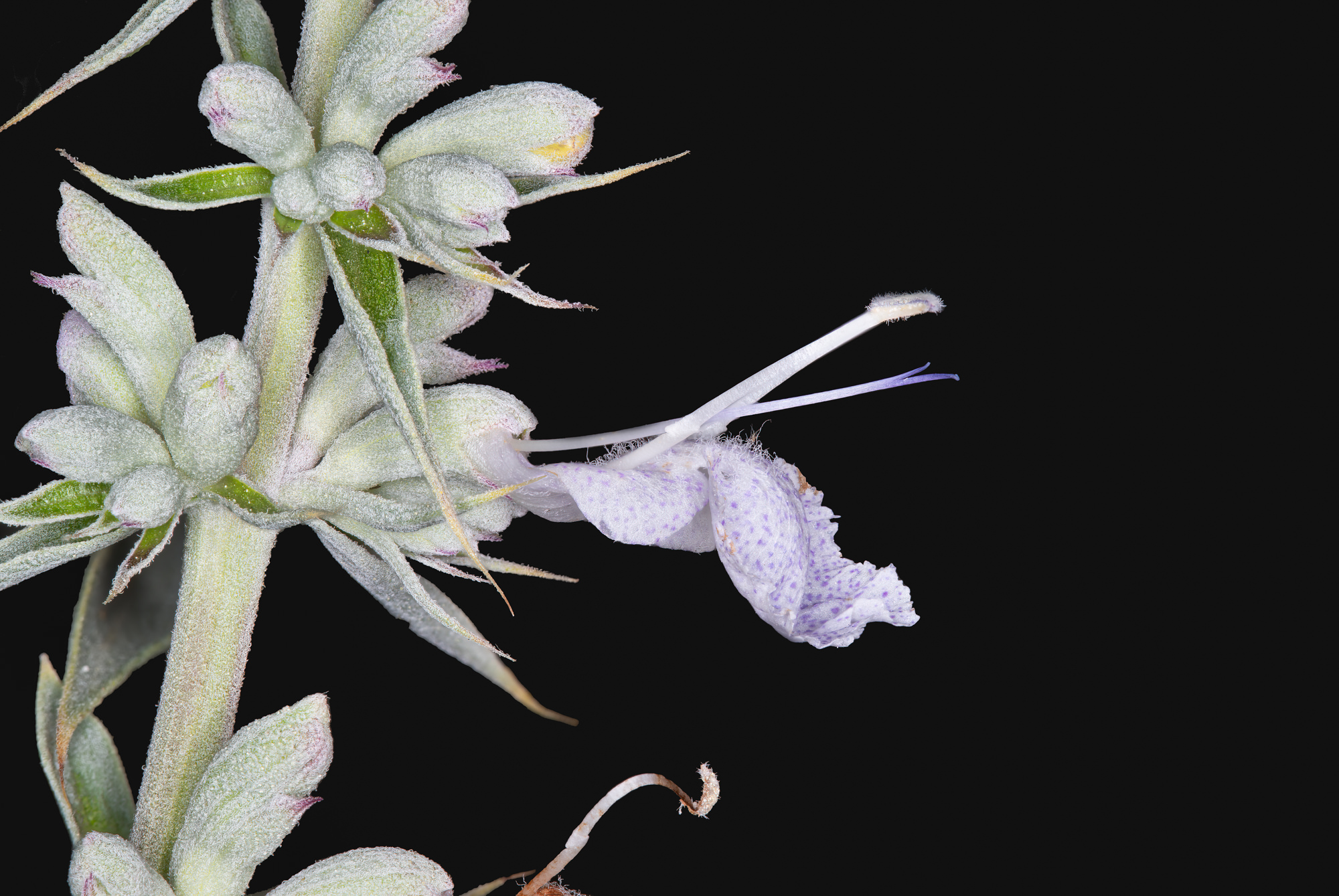 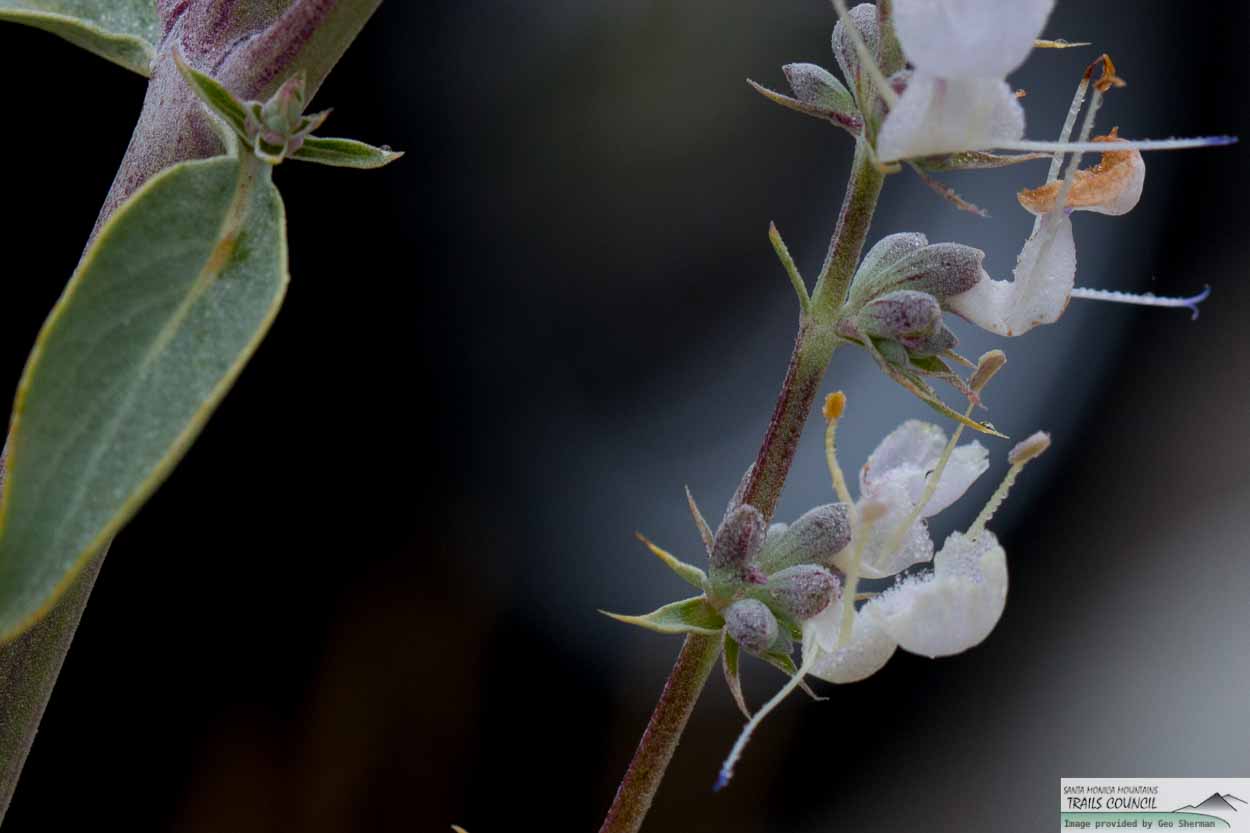 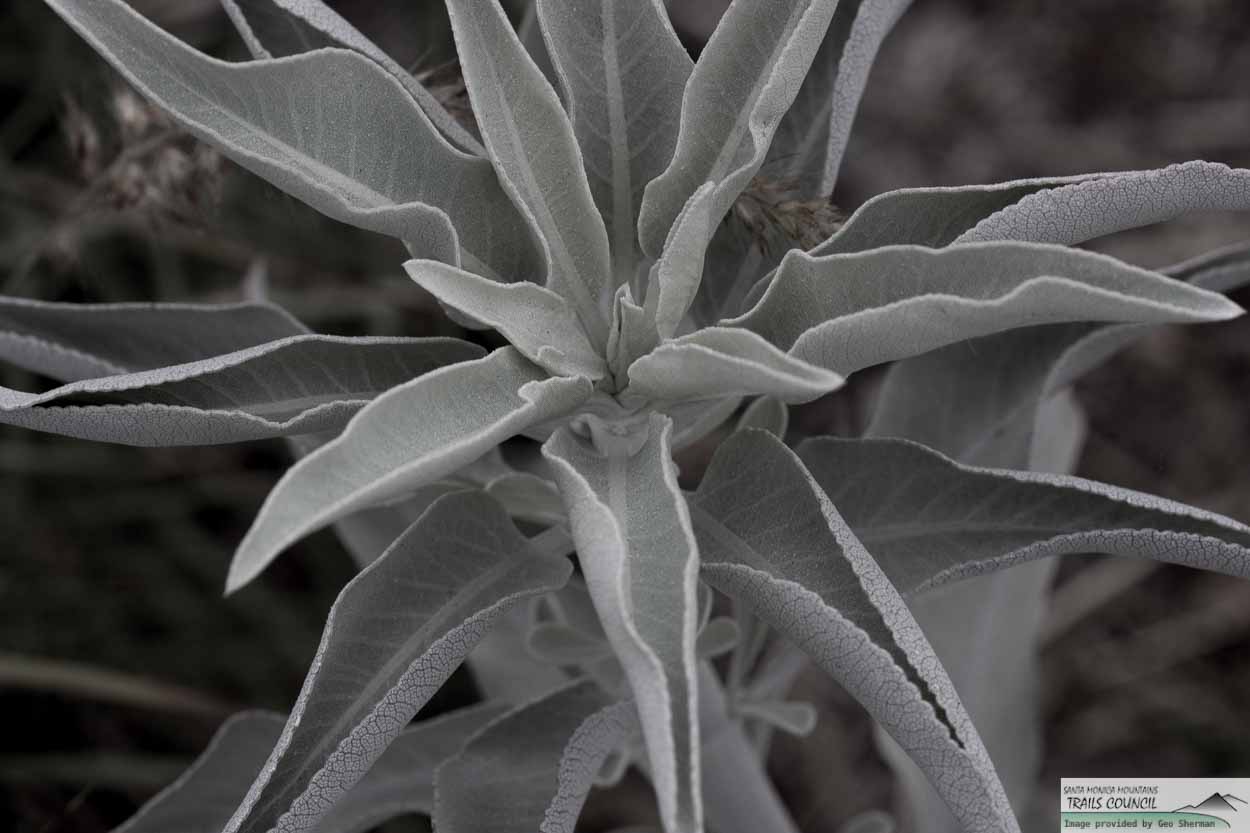 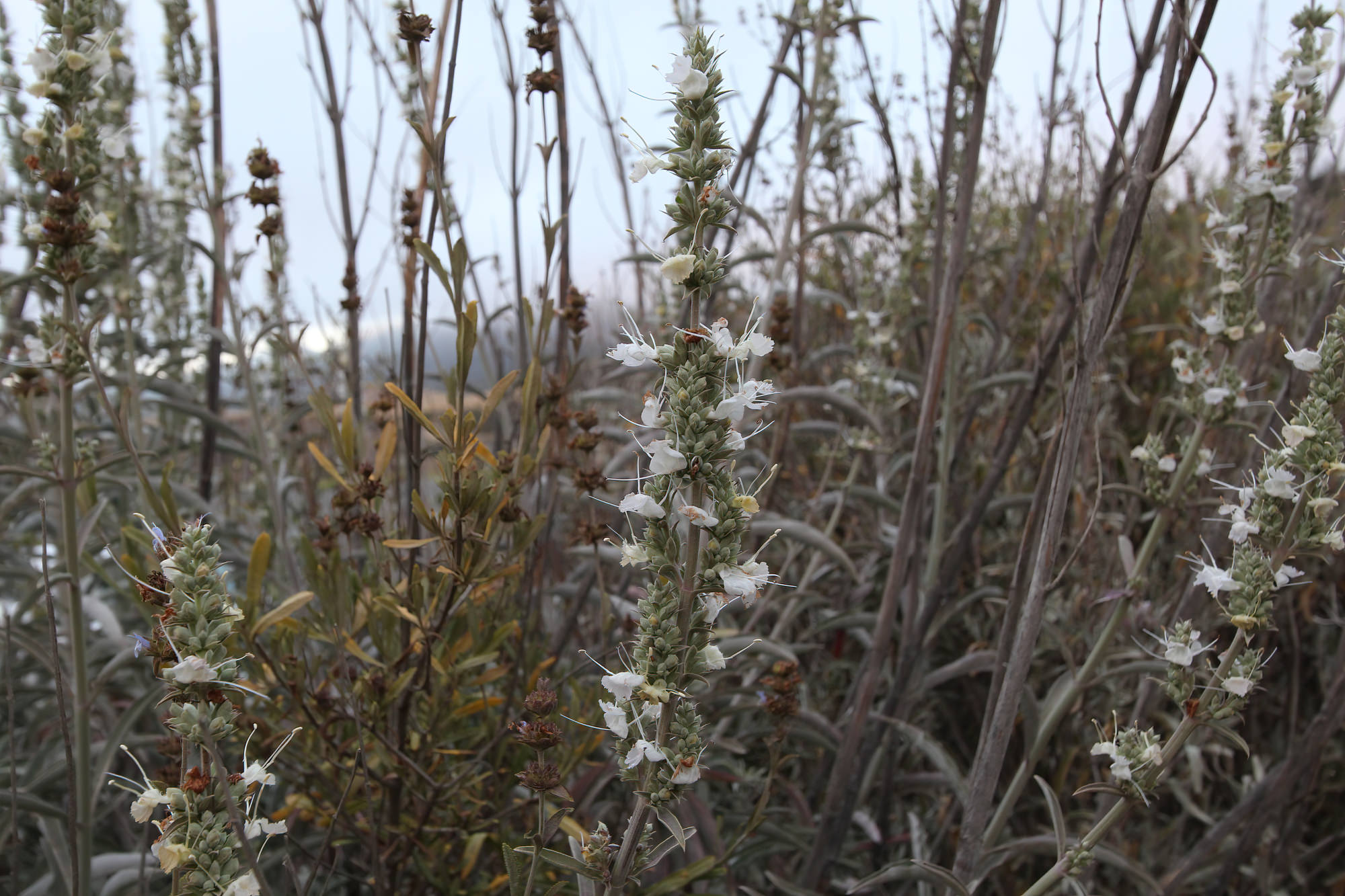 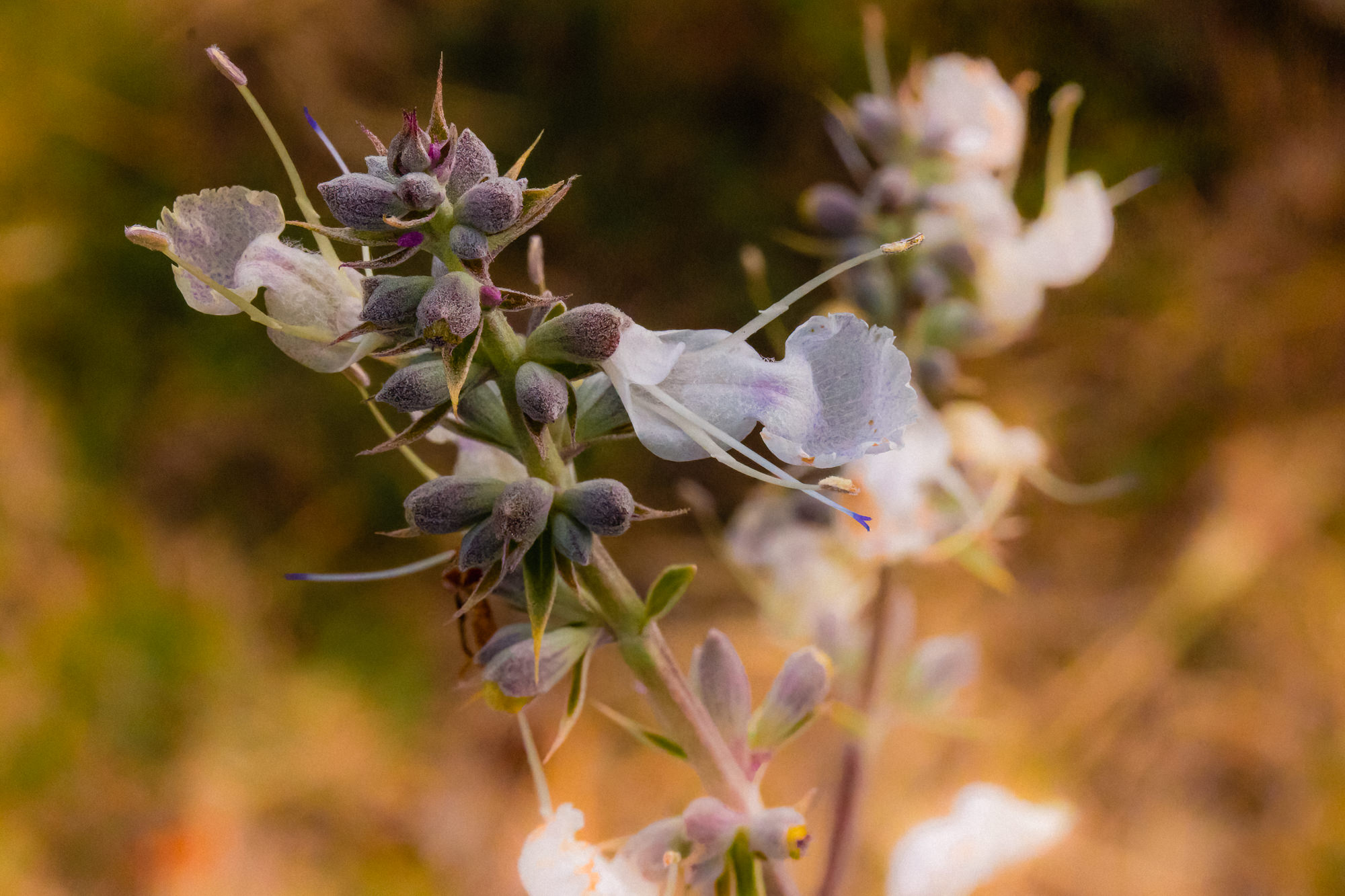 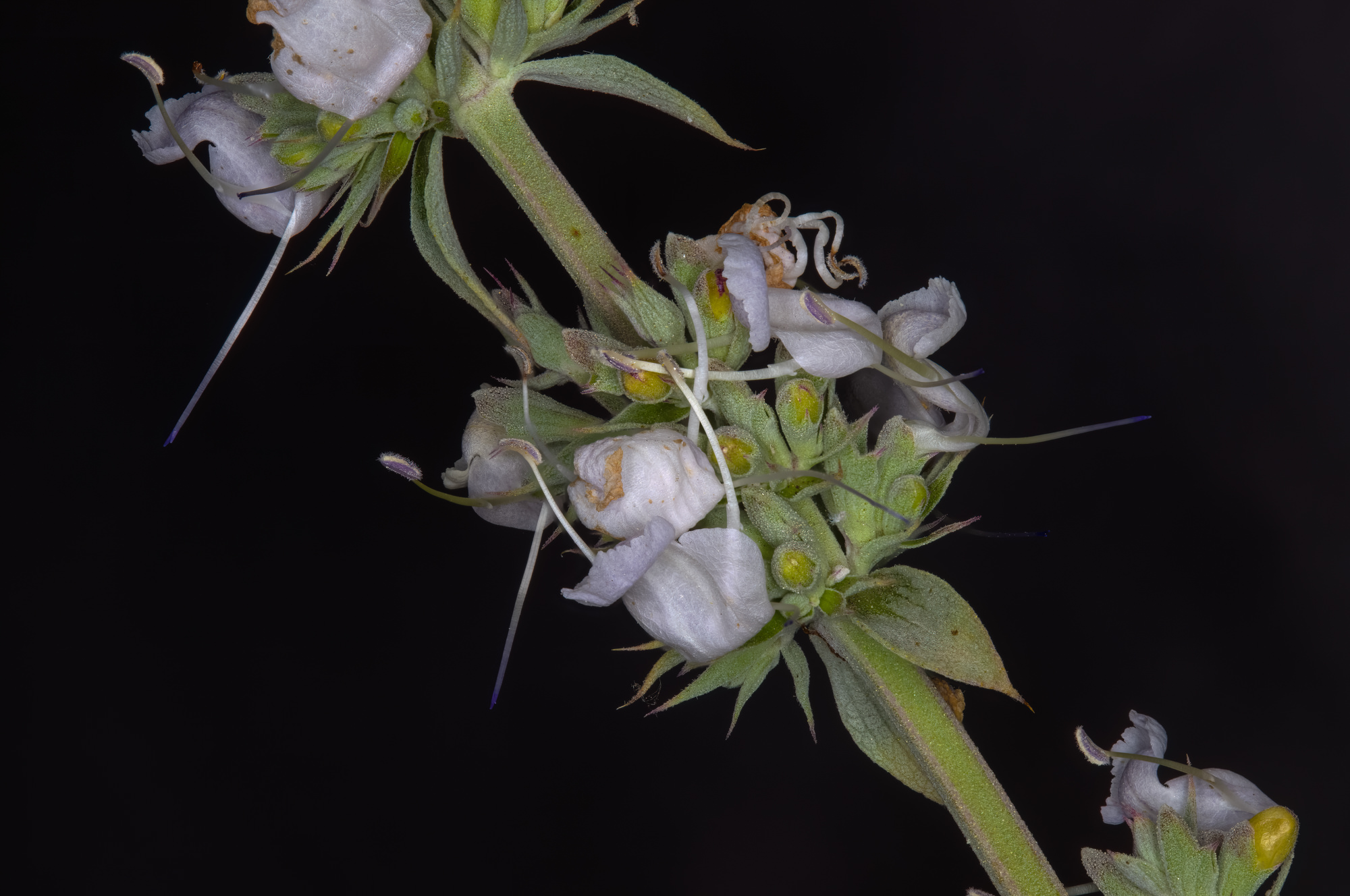 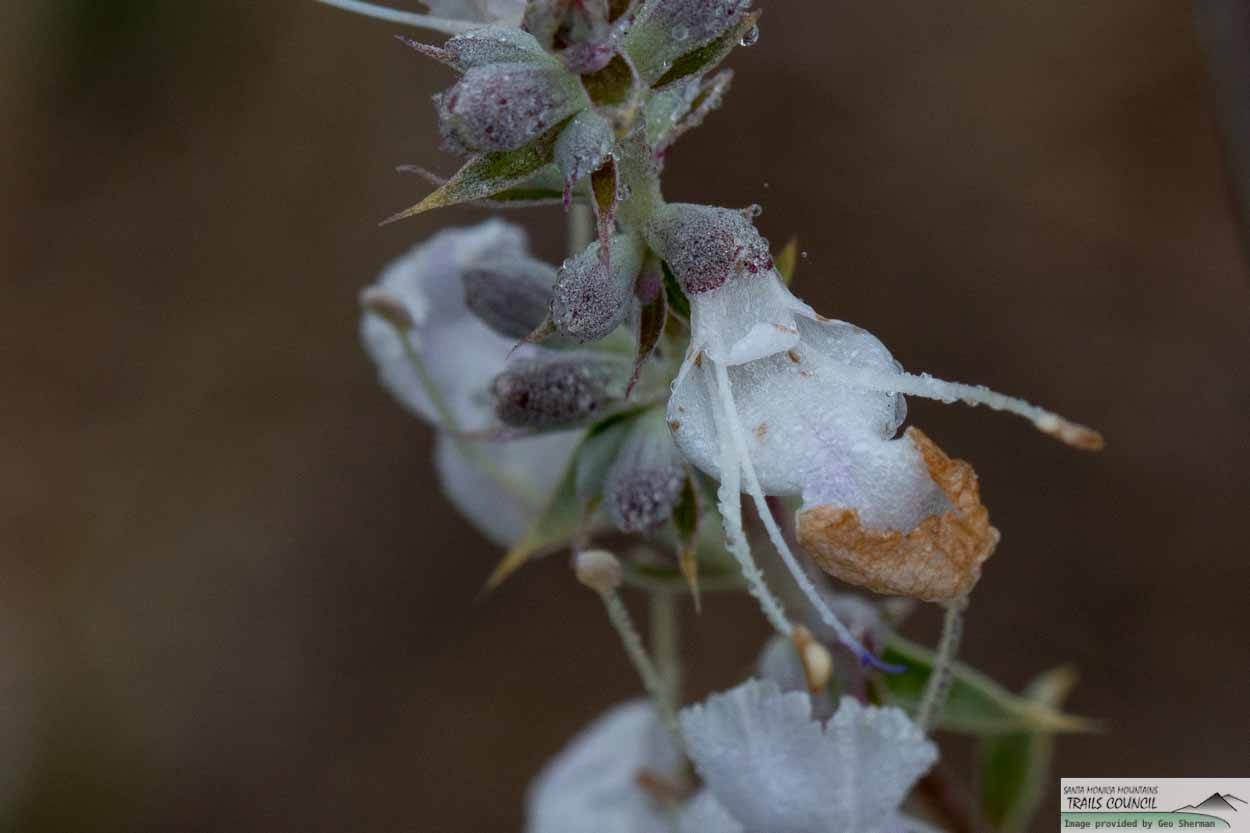 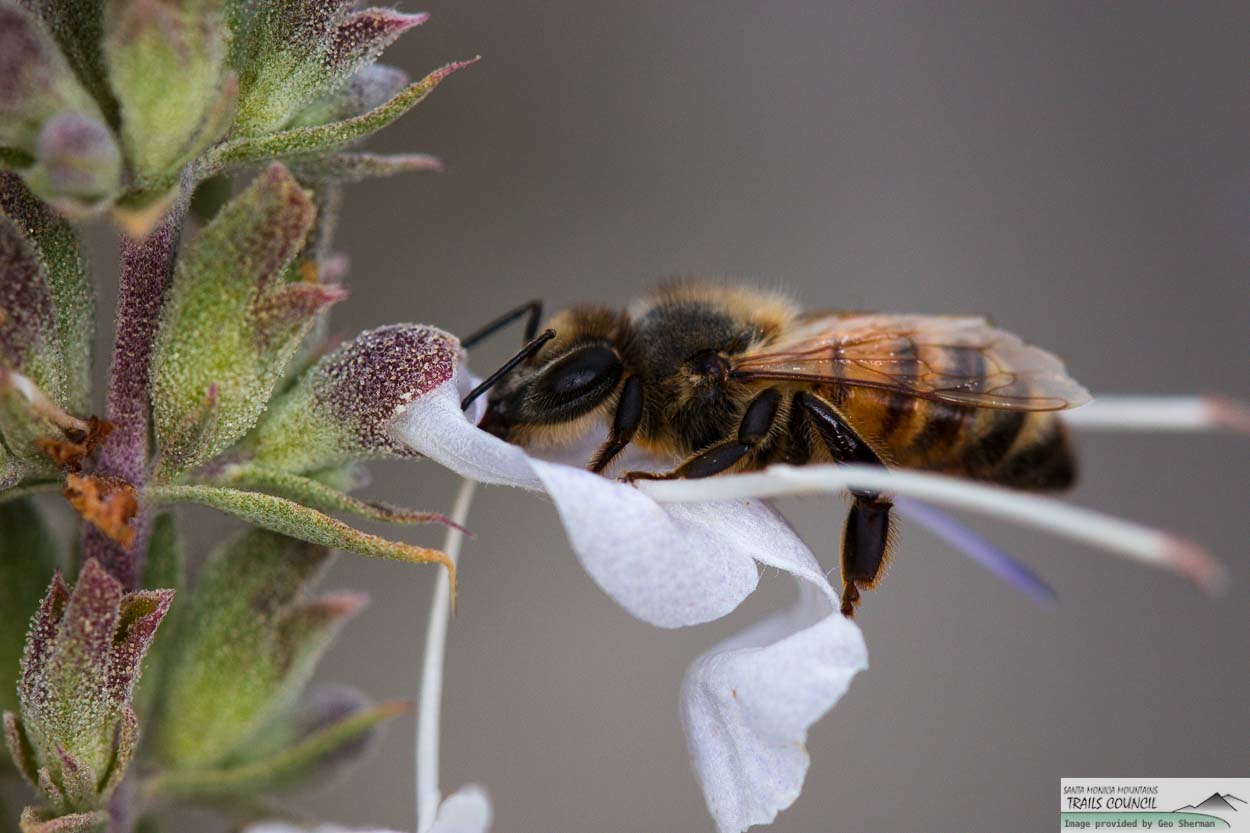 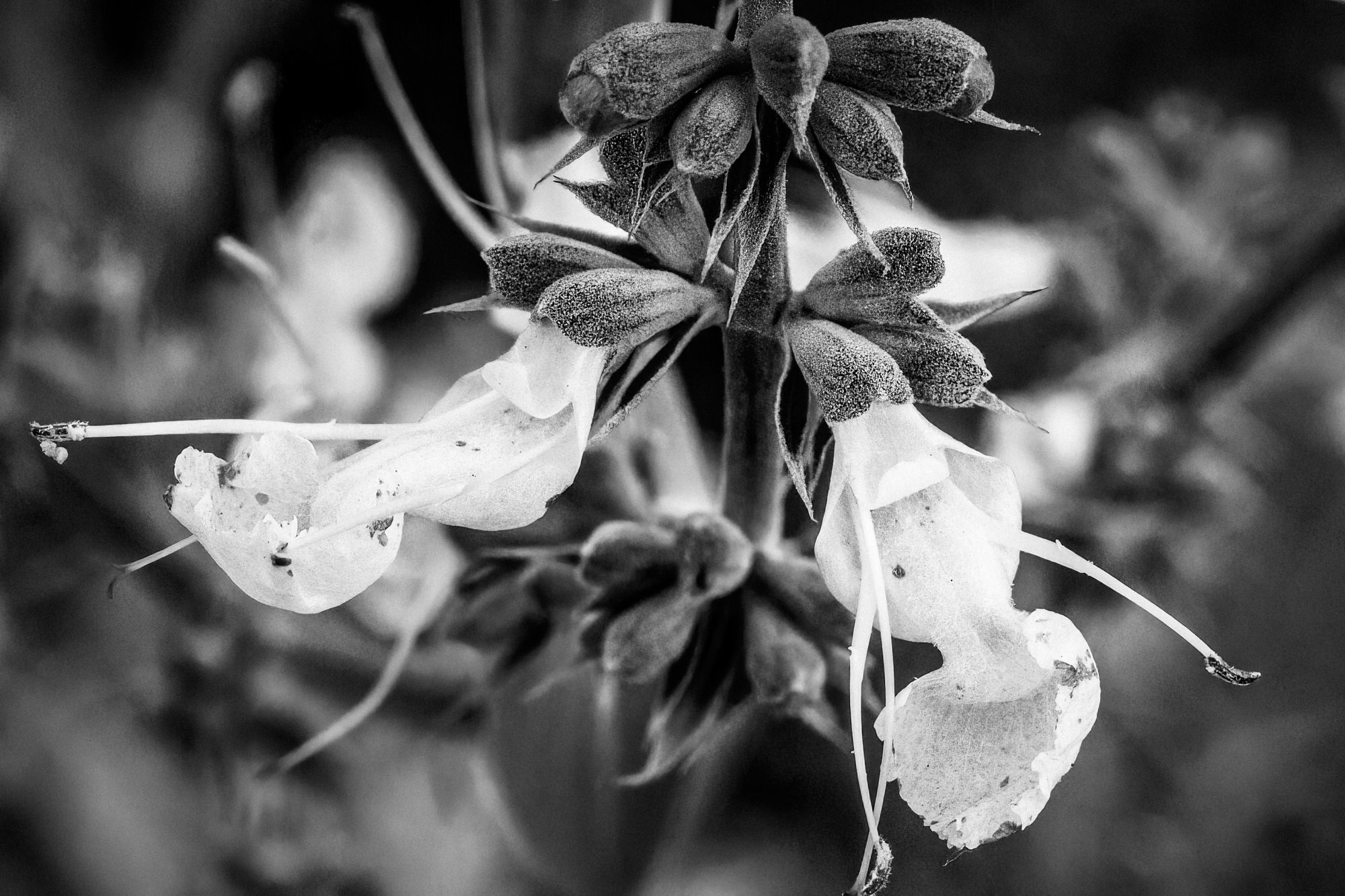 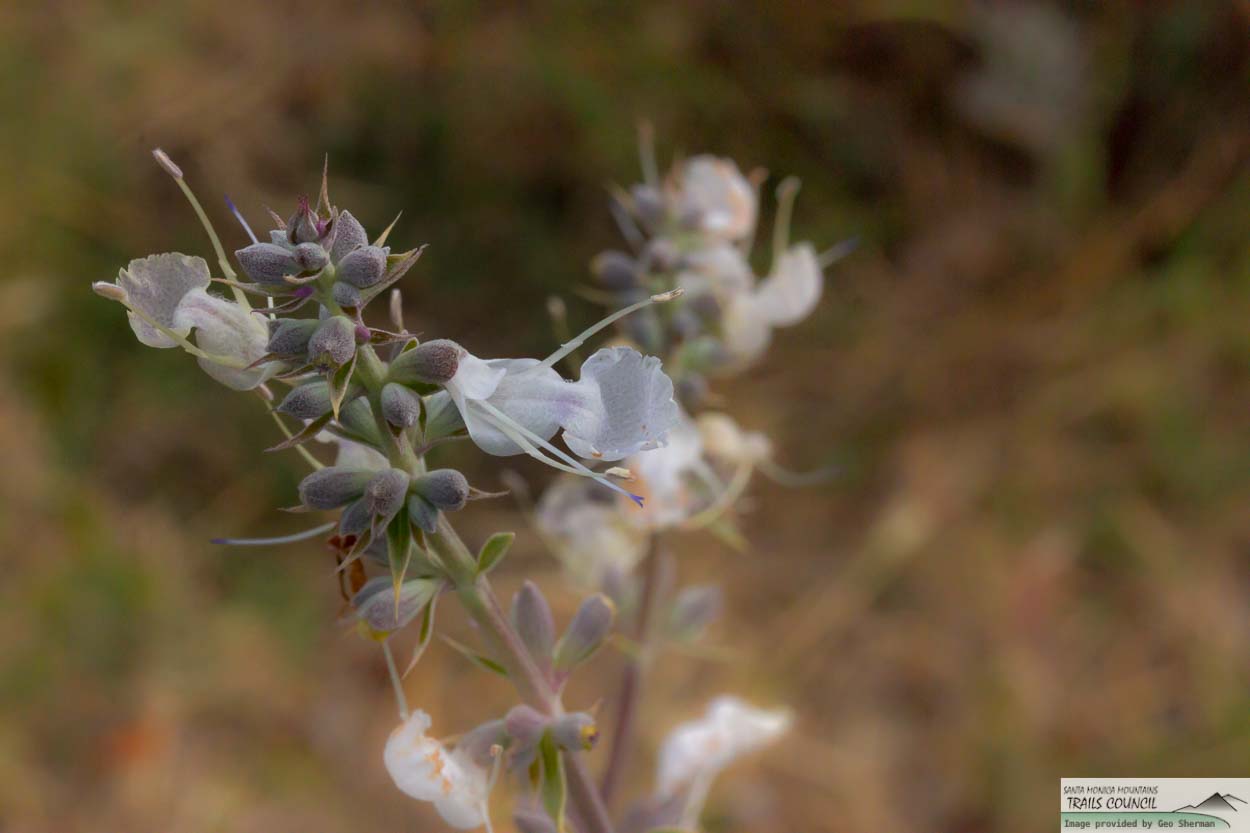 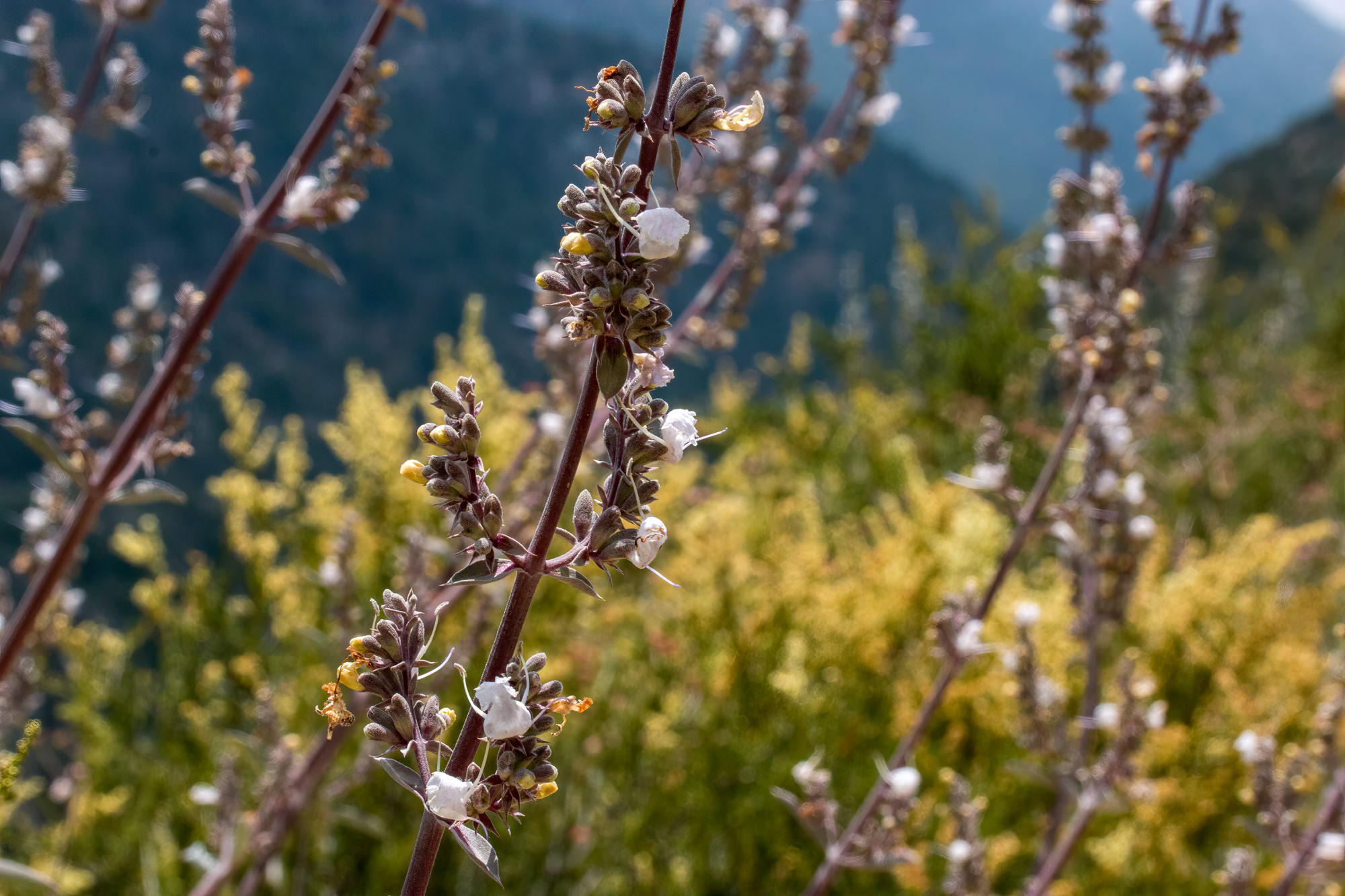 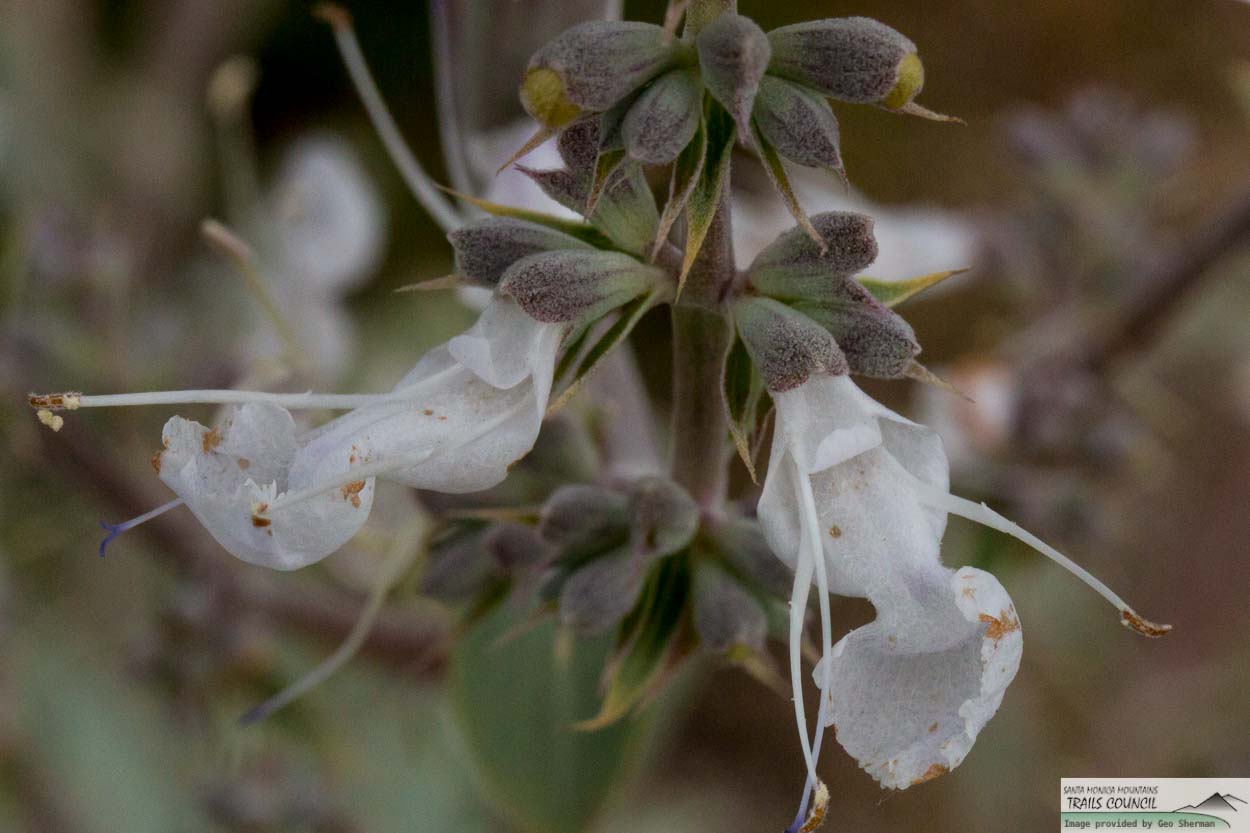 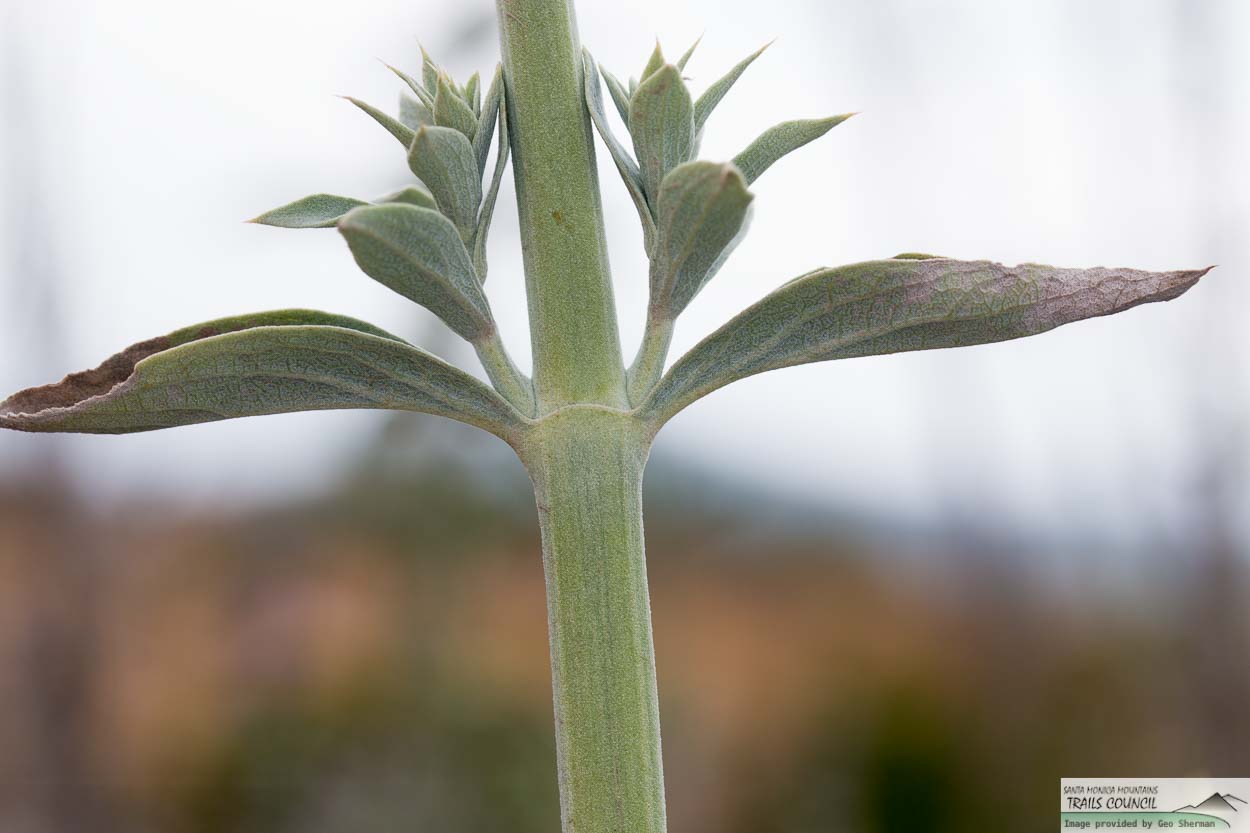 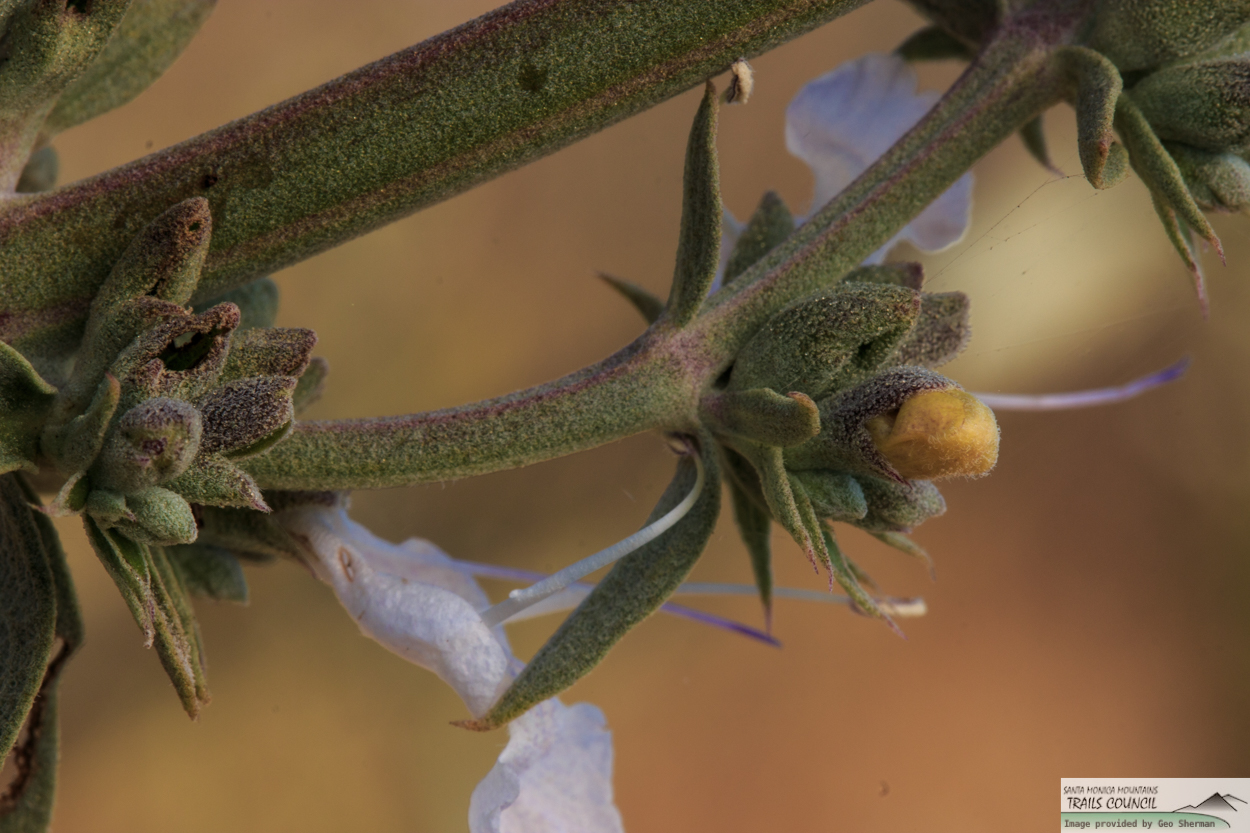 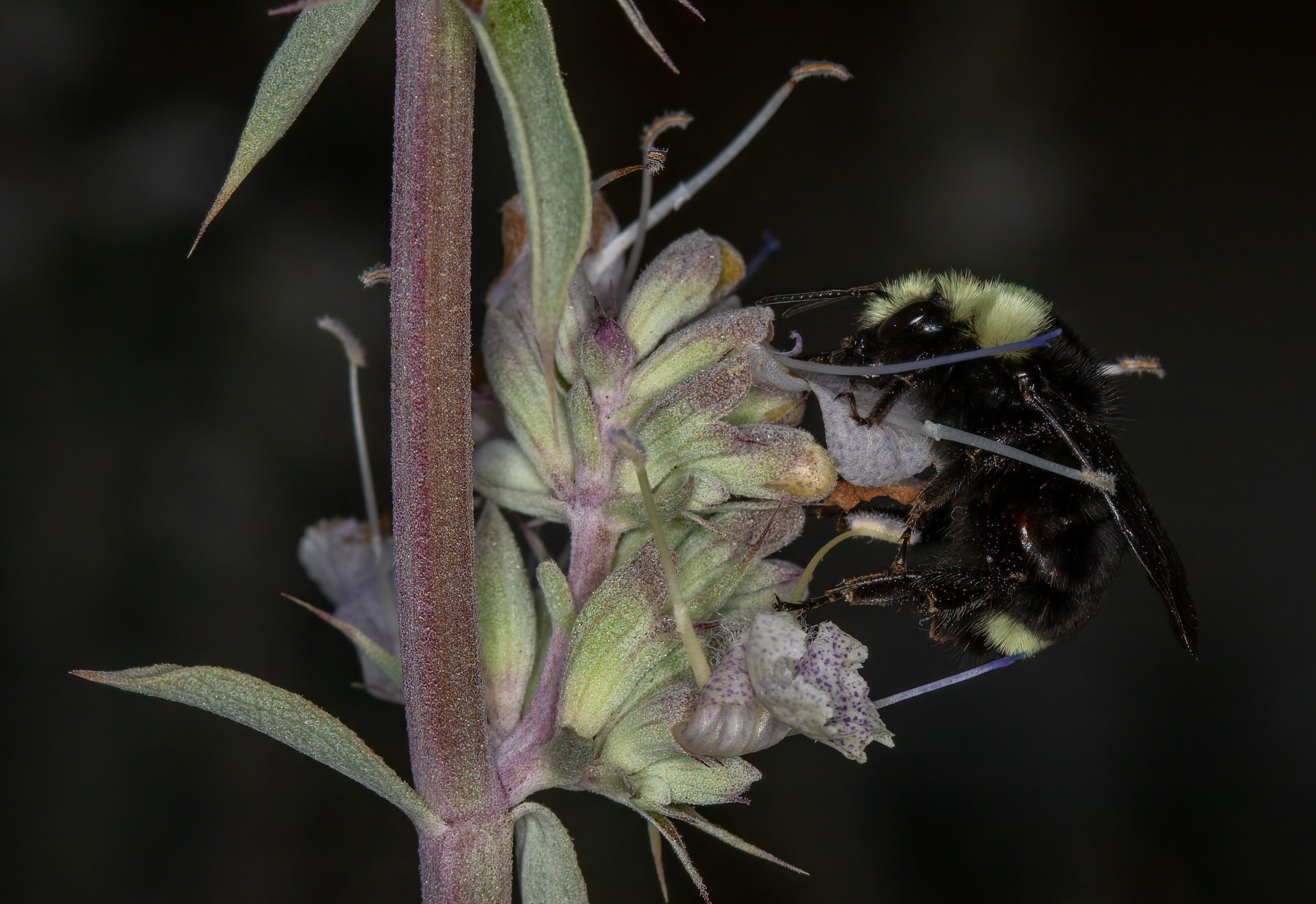 We are fortunate to have several species of Sage in our local mountains: White Sage, Purple Sage, Black Sage, Chia and Hummingbird Sage. These plants belong to the Mint family and had many uses for the native peoples of California. Most Salvias have opposite leaves and round stems that start out square.

The flower is a colorful corolla with two lips of unequal length. The calyx is often two-lipped - for White Sage we have a five part calyx. The upper lip may have two or three teeth or it may be united. Colored filaments and two Stamens protrude from the flowers. The more well-known Sagebrush (Artemisia californica) is not related to this group of plants - it is surprisingly a member of the Aster family. What Sagebrush and the Sages have in common is pleasant fragrance produced by the plants. Habitat for White Sage: coastal sage scrub, chaparral and pine forest below 4000 feet elevation (likely because lower temperatures during Winter) from Santa Barbara to the middle of Baja California. These plants are well adapted to droughts and fires. Plants over a year old develop deeper roots that can survive fires. White sage (Salvia apiana) can grow to 3-5' in height and 4-6' wide (flowers spike to 9'+). The flower spikes last a single season but since the plant is a perrenial, the base will be around next season. The leaves are usually 4-8 centimeters long with a tapered base. The leaves are described as crenulate - scalloped in laymen's terms. White sage leaves are pale gray-green on top and whitish on the bottom. They are also considered simple and of course have a strong odor. The white to pale lavender flowers bloom on long spikes from April to Mid-July. The flowers begin to form into fruits and seeds from September to October. The flowers are hermaphrodite (have both male and female organs) and are pollinated by Bees and small wasps. The flowers are designed in such a way that pollinators have to push their way in to access the flower's nectar. Nevertheless, this plant is quite popular amongst the bees and from their efforts comes some of the best tasting honey. If the plant does not get pollinated by insects than it has a backup method - hairs on the plant's leaves will stick to the seeds and helps carry them away in the breeze. Threats to White Sage include conversion of wildland to the suburban environment and over-harvesting for medicinal use. White sage has been proven to be a capable antibacterial agent and astringent. It is also known for its anti-inflammatory properties. White Sage, burned for spiritual purposes by the native peoples was an important part of indigenous cultures. For a more extensive description, have a look at the following link Read More The seed was a main ingredient of pinole, similar in usage to our wheat flour. The leaves and stems were eaten by the Chumash and other tribes and were used to brew tea.

Name Origin: Sal'via: from the Latin salveo, "I am well," apia'na: refers to bees which this plant attracts